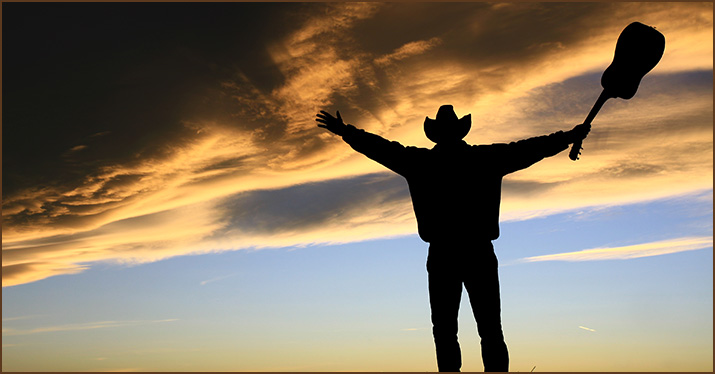 The CLIMB is a podcast produced by Brent Baxter and Johnny Dwinell dedicated to helping singers, songwriters, and artists create leverage in the music business. This post is excerpted from The CLIMB podcast, Episode #159, “Stop Calling Your Songs ‘Great’.”

I remember when I was writing my early songs, back in Arkansas, and I’d be real excited about a song, and Tim, a good buddy of mine who was my co-writer, would hesitate — he wasn’t comfortable calling his own stuff “great.” Now, in the process of creation, I’m sure we had moments where we said, “Man! That’s great!” I was wrong, by the way, but I didn’t know that then. But when speaking about those songs outside the writing room or the hay bale of the writing campfire, it was a different story with Tim. He’d say, “I just have a hard time calling one of my own songs great. I’ll say ‘I love it,’ but I don’t think I can call it ‘great.'”

I took it as his having a healthy dose of humility and uncertainty, but he was right. After all, what qualified us to be able to call our own songs great? At that point, we had accomplished absolutely zero, other than work tapes recorded around a campfire. What gave us the right to proclaim greatness about our songs? So, looking back now, we don’t get to decide if our own songs are great. We can love them — we’re the only ones who can decide that, but really, only the market gets to decide if a song is great.

If the market, which is the listeners, decides your music is great, then it is. I mean, greatness… what does that mean? How do you define “greatness?” We all have our own definition of what greatness is. And I’ll change my mind, sometimes. I’ll hear a new jam and say, “that’s great!” and then a month later, I’m over it, and I’m like, “that’s not all that good.” But if the market decides your music is great, then it is. Who can decide otherwise?

There’s probably some people who want to put their boot through the screen right now, but hang with me. Greatness is kind of arbitrary. You can look at something technically and determine if something is quality or not. But greatness… I remember watching CMV or VH1 and seeing those shows, “The 50 Greatest Country Artists” and really, it’s kind of click-baity, right? Who decides if Hank Williams is greater than Johnny Cash or Garth Brooks? It’s all kind of arbitrary. It’s a qualitative opinion, it’s subjective, because writing music isn’t math. 2 + 2 = 4 no matter what the majority decides. Music is not like that. You might be able to point out, objectively, how your song has a more sophisticated structure or a more sophisticated rhyme scheme or melody compared to the “clichéd hit songs” on the radio, but all you’ve argued is that your song is technically more sophisticated. That’s a different argument. Don’t confuse that with greatness.

Now, I don’t really care if you call your songs great. But in certain settings, that will probably make you look like an egotistical, self-unaware amateur. You know, “This jam is awesome, it’s going to change the world. It’s great!” If that’s coming from the artist or the writer, the first thing I’m usually thinking is, “Nah…” It probably means that you’re not ready and you’re not self-aware and you haven’t had the humility kicked into you yet.

Johnny Dwinell: And the whole “gonna change the world” thing needs so many planets to align. It could be the greatest song in the world, but if you don’t realize that other planets have to align, that right there says you’re unaware.

I’ll give you a quick example. There’s an artist we used to work with… this is CRS week, that’s Country Radio Seminar, so every radio program director from every radio station is in the same hotel on Nashville for three days. What an opportunity — these are the gatekeepers, these are the people who can put you on the playlist or pull you off of the playlist. Everybody from Garth Brooks all the way down to our clientele, who are really talented independent artists who are trying to get something going and gain access and create relationships, because it’s about relationships.

So the story’s going around, multiple programmers are talking about this one artist. But the team around the artist is talking about recording songs and trying to put him out and get a #1 song off of secondary radio. And everyone’s shaking their head — this artist and his team are unaware. You’re not going to get a #1 on secondary radio as an independent artist. The highest you can probably get is #16. Secondary radio is not primary radio, it’s not Nashville, it’s Bowling Green. It’s a smaller market, and they play a lot of independent artists. Folks in Bowling Green can still get Nashville radio, so they have to do something different. If they play the same thing Nashville radio is doing, everybody’s going to listen to Nashville. So they’re differentiating themselves with their product and what they offer. But you’re not going to get above #16 with that. So, this artist doesn’t get it. It’s just all ego. “We’re going to get that #1!” It’s that awareness thing, the business side is real and you’ve got to understand how it works.

The CLIMB is a podcast produced by Brent Baxter (award-winning hit songwriter with cuts by Alan Jackson, Randy Travis, Lady Antebellum, Joe Nichols, and more) and Johnny Dwinell (owner of Daredevil Production) that’s dedicated to helping singers, songwriters, and artists like you create leverage in the music business because that’s what you’re gonna need. You’re gonna need some leverage, you’re gonna need an audience, and you’re gonna need a reason for people to stand up and salute you. It’s not just about your talent – you’ve got to bring the business, and that’s why we call it The CLIMB, it’s an acronym that stands for “creating leverage in the music business.” Hear this entire podcast and more at on the Disc Makers website.

Related Posts
Your musical talent isn’t enough (to make it in the music business)
Become a student of the songwriting craft — Indie Music Minute
Stop failing at music (and be a smart CEO)
Will you take responsibility for your music career?
Being an authentic artist — Jason Wilkes’ journey to find himself

5 thoughts on “Stop saying your songs are “great””