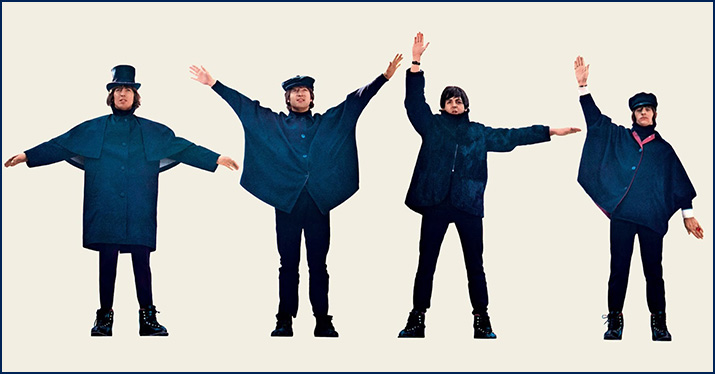 Few popular songs meld music, lyrics, and theme as potently as the Beatles’ 1965 hit single, “Help!” Here’s how they did it.

If there is a single unifying principle at work behind all the articles I’ve written for Disc Makers, it’s this: How do you use all the tools at your disposal — melody, harmony, arrangement, tempo, beat, and lyrics — to best embody your song’s theme?

It’s nice to know how to use flat-sixth chords, and how to change key, but ultimately, whether you’re writing a love song or a sad song or a protest song, your end goal should be to completely realize your song’s theme. And, if you’re writing a pop song, you don’t have much time to work with, so every note, every phrase, every beat, and every sound counts.

“Help!” by the Beatles is a masterclass in efficiency, drama, and heightened thematic exploration. Let’s explore the ways in which the Beatles capture the theme of desperation in a 2:19 pop song.

They don’t mess around. The song begins with an immediate and literal cry for help. There’s a lot going on at the same time, but let’s first look at the melody of the backup singers (Paul McCartney and George Harrison). Their first cry is on F#. The second is on G. The next on G#. This upward, chromatic movement heightens the sense of urgency as the intro progresses, culminating in a leap up to C# before settling back on A.

Meanwhile, John Lennon’s lyrics and pained vocals make it clear that this is a personal cry of pain:

Much has been made of how tonally ungrounded the intro is. Simply put, the listener doesn’t know what key the song is in. The chords for the intro are Bm, G, E7, A. Given that most pop music begins with the I chord, one might think “Help!” was in B minor. But the minute we hear that descending bassline and upward chromatic movement in the vocals and land on a G major, that notion is tossed out the window. Listeners don’t know where the music is headed, but they know it’s building up to something. The tension is increased once again with a similar harmonic movement to E7 before they land on A and the music breaks.

Even then it’s not totally clear that we’ve reached our home key, because Harrison’s chromatic guitar lick makes us feel like we’re in a freefall. It’s not really until the verse begins (on A) that we realize we are, in fact, in A.

For all the drama, with descending basslines and chromatic vocals, and given that it’s an unusual chord progression (ii, bVII, V, I), there are two common tones played throughout those first three tumultuous chords that keep us from feeling like it’s total chaos. I’ll spell it out:

In the first 10 seconds, the band clearly establishes the theme is one of desperation. This song is not “Help me with this crossword clue” it’s “Help me, I’m at the end of my rope!”

Side note: This intro, as short as it is, prefigures so much of what will happen throughout the song. We’re going to have call and response vocal interplay; we’re going to see these exact chords again in the chorus, and we’re going to get that great leap up to C# in the melody.

Last note: That minor chord with a chromatic movement in the fifth is reminiscent of the James Bond theme, so it’s interesting that some versions of the song (in the US market and possibly elsewhere) began with a very James-Bond-like intro.

If “Help!” were a movie (and not just the title track of a movie), that intro would serve as a great cold open. We begin in medias res, with our narrator clearly in distress. Now, with the verse, we get a little back story.

When I was younger, so much younger than today
I never needed anybody’s help in any way
But now these days are gone and I’m not so self-assured
Now I find I’ve changed my mind and opened up the doors

Lennon uses a lot of chords here: A, C#m, F#, D, G, A, but not a lot of melodic movement. He’s mostly singing one note (C#). That lack of movement nicely corresponds to our theme. He’s trapped, both lyrically and melodically. It might be unbearable for the listener were it not for McCartney and Harrison giving us some melodic movement in the backup singing. (This is the one part of the song McCartney claims he helped with.) The backup singing is interesting in that sometimes the singers are singing the words before Lennon does, sometimes after him, and sometimes in unison.

The chords are pretty standard for A major, with the one exception of that flat-seventh (G). That progression of D-G-A (IV-bVII-I) is unusual, but hey, it works.

For me, it’s the chorus of “Help!” that really cements its place in the shortlist of all-time great Beatles songs. As with the verses’ melody, Lennon mostly sticks to one note for the chorus. This time, however, it’s an E. What I find so interesting is that E is not in either of the first two chords (B minor, G major).

Singers will occasionally sing notes that fall outside of a chord, of course. But it’s highly unusual for a singer to linger on an extra-chordal note for an extended period — and more unusual still for that note the be the first note they sing. (If nothing else, it can make it hard to sing.)

Sometimes, I wonder about other artists’ creative process. How did Lennon decide on this melody and harmony? It would have made so much more sense for him to sing the melody on D, or, conversely, to stick with E, but use other chords instead. Which came first: Did he intuit that this combo would best dramatize his lyrical theme? Or did he have this lying around and when it came to writing a song called “Help!” did he then whip it out and realize it would work? (For the history on this song, check out Beatles Music History online.)

E is the 4th note of B minor. And that note just hangs there, adding a plaintive quality to the already pleading lyrics: “Help me if you can I’m feeling down.” (It should be noted that this is not a suspended 4th chord. The Beatles are still playing the third, which only adds to the tension.) That tension doesn’t let up when the chord changes to G, as E is the 6th note.

McCartney and Harrison add harmonies to the next chord, which is E7. Here Lennon’s note does have a home, but because that chord is an E7 (and because we’ve heard this very progression in the intro) we can tell we’re not done yet.

And then we get Lennon leaping up to a high C# for the word “please” in the phrase “Won’t you please, please help me?” Lennon’s melodic range up until this point has been pretty static, using only a five-note range, so that leap up to C# comes across as very dramatic.

I haven’t focused on the arrangement much, but there are a couple of nice touches. The first being the added tambourine for the chorus, which adds emphasis to the backbeat and helps the song rock that much more. Also, I dig the acoustic approach of the third verse. The Beatles were always shaking things up in their last verse, and here it gives you a much-needed dynamic change, especially since there’s no bridge.

After finishing up the third chorus on A, we immediately dive down to an F#m, which always seems such a startling and dramatic change. Where is the song going now? Well, it’s going right back up to A, but that alarming repeat of “help me” makes it clear that Lennon isn’t kidding.

Technically, the outro lasts as long as the intro (ten seconds), which is a nice bit of symmetry, although that’s a little misleading as much of that time is spent holding the last note. That last note, however, is an added sixth. (It’s interesting to compare the end of “Help!” with another Beatles’ song that ends of a sixth chord, “She Loves You,” and how a similar flourish can feel very different in context.)

There’s another song that came out around the same time that also features a singer begging for help, and it makes for a good comparison with “Help!” and that’s “Help Me, Rhonda,” by the Beach Boys.

“Rhonda” was released in March of ’65, right before the Lennon and McCartney wrote “Help!” (in April). In the Beach Boys’ tune, the singer is pleading to a woman named Rhonda to help him forget about the woman he loves. To this end, he begs her over and over again, “Help me, Rhonda.” On the surface this may seem like another exploration of desperation, but which song really sounds like the singer is at the end of his rope, or just a guy looking to get laid?

Another interesting comparison is the flip side of “Help!” — McCartney’s “I’m Down.” It’s long been discussed how the A and B sides of Beatles’ singles often work together as opposite sides of the same coin, so to speak (see “Strawberry Fields Forever” / “Penny Lane,” etc.) “Help!” / “I’m Down” is a great example of this. I love “I’m Down.” The performance, with McCartney’s screaming and its refrain of “How can you laugh when you know I’m down?” (note the call and response, a la “Help!”), is about as punk as anything that was recorded in the ’60s. “I’m Down” is more angry than desperate. But let me ask you — and this is coming from a confirmed McCartney fan — between the two songs, which narrator do you believe more?

Thanks to its arrangement, melody, harmony, and lyrics, I think “Help!” more successfully embodies its theme.

Related Posts
Wow ‘em with your song intro
Sixth chords can add subtle complexity to your songs
Songwriting lessons from John Lennon
Using suspended chords in your songwriting
Key change! How to wow ‘em with a chorus modulation

3 thoughts on “Songwriting tips from the Beatles’ “Help!””