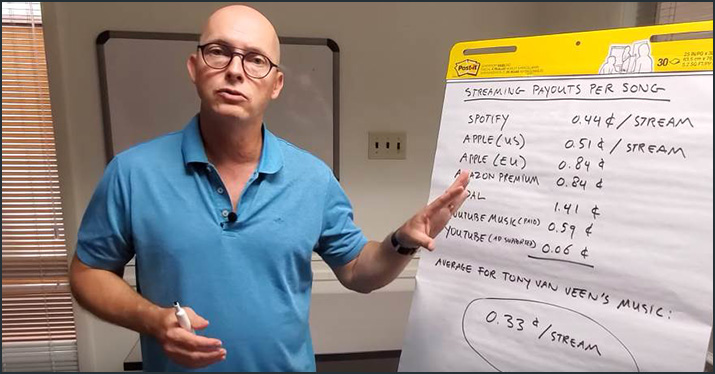 When you analyze the money you can earn from music streaming, you’ll find it’s difficult (at best) to earn enough to support yourself as an artist. But streaming is valuable as a gateway to discovery and other means of monetizing your fan base. How much does streaming pay?

Every so often there’s a dramatic industry headline about how little streaming pays artists and songwriters – artists like Pharrell lamenting they received a pittance for their millions of streams. I also regularly hear from independent artists who tell me that streaming just doesn’t pay: “I used to pay some bills with my income from CD or download sales,” the common story goes, “but I can’t even buy a cup of coffee from my streaming royalties.”

That got me curious to know, “How much does streaming pay me as an independent artist?”

So I decided to do some research. To get the answer, I logged onto the CD Baby dashboard for my own personal account (where I released my music, and that of another artist, back in the day) and looked at the recent history of payments (for the past 90 days) I’ve received from the various streaming companies. I documented what I found in this short video:

First, a few words of caution: These results are for my music. Your mileage may vary. However, most independent artists’ royalty streams are probably in the same ballpark. Additionally, these are gross payment numbers, so these payments are before CD Baby takes its nine percent administrative fee. This is what Spotify and Apple Music and Amazon pay to CD Baby — or to your record label or wherever your payments are submitted.

Here’s what my music earns through streaming:

The most streams I received, by far, came from Spotify. Spotify’s gross payment to CD Baby is 0.44¢ per stream. Apple Music provided the second-most streams, and that paid 0.51¢ — a little more than half a penny per stream — in the US. In the European Union, Apple Music pays a little more, 0.84¢ per stream. Amazon’s Premium subscription service also pays 0.84¢, and Tidal actually pays the most at 1.41¢ per stream — though, I got almost no streams from Tidal.

Really, for me, once you get past Spotify, Apple Music, and Amazon Premium, the rest of the platforms have almost no streams. One exception is YouTube. YouTube Music, YouTube’s paid subscription service, pays 0.59¢, which is actually pretty good by streaming standards (low as it is). The YouTube “ad-supported” videos — those videos that contain your music which get uploaded directly to YouTube by you or by random fans and which can only be identified and monetized with Content ID — only pay 0.06¢ (yes, 6/100th of a penny per stream), and I received quite a few streams on YouTube’s free platform.

What does that average out to when you take all the payments and all streams? My music ended up averaging 0.33¢ per stream. That means 1,000 listens of my music pays out $3.30.

Is streaming worth it for independent artists?

When you analyze how much money streaming pays, it’s clear that it’s just about impossible to earn enough to support yourself as an artist. If streaming were my only music income and I wanted to make $40,000 per year, I would need 12.1 MILLION streams in a year at my average rate. That’s an extraordinary one million streams every month!

This is why we’ve long said that the formula for independent musicians to achieve financial success is not the same as internationally recognized artists. While Taylor Swift garnered eight million Spotify streams for her single “Look What You Made Me Do” in one day (which would have grossed $35,200 using the numbers I’ve outlined here) and Ed Sheeran, who currently tops the list of “most streams per month by a music artist,” rakes in 70.32 million streams per month (that’s a cool $232,056 a month using my average calculation), how many streams are you going get in 2019? Let’s say you do pretty well and average 3,000 streams a month — that’s a grand total of about $120 in net sales for the year at $.0033 per stream.

Yet, staying off the streaming platforms is not the answer for today’s emerging artist. Thanks to streaming, every artist today can have overnight access to a huge listener base — currently around 400 million subscribers and projected by Goldman Sachs to grow to 1.1 billion listeners in 10 years. Streaming has opened up the world to music artists — something that was never possible during the physical music era. It is a gateway to discovery and exposure to new fans. Not being on Spotify, Apple, and Amazon means you are guaranteed to remain anonymous to most of the world, and that’s not going to help you grow your music career.

So what to do?

The trick is to leverage the fans and followers you gain on the streaming platforms and get them to buy other items from you. If you’re getting 3,000 streams a month, that’s 36,000 listens a year. That means people are paying attention to your music. It’s worth targeting playlists on the streaming services and having your music available everywhere people listen to and discover music. But it’s imperative that you also try to turn those listeners into purchasers of your music and merch as often as you can. Make it easy to find you online and make it easy for people to find and buy your music and merch.

If you sell CDs and merch at your live shows and online, the profit you make from selling one CD equals approximately 3,000 streams. One t-shirt sold nets you the equivalent of 5,000 streams. If you play multiple shows a month and sell your merch and music, that revenue can start to add up. It’s going to take tens of thousands more streams to get you the same payout of a few merch sales at your gigs.

Of course, all this is easier said than done. It takes a LOT of work to attract that fan base, get them to save, like, or follow you, and then engage with them enough so that they want to come to your concerts and buy your discs and merch. You need to be creative and spend time converting streamers to buyers – which times away from creating, recording, and performing your music.

The industry continues to change. Nobody said it would be easy. Now that you know how much streaming pays, go blaze that path…

The Disc Makers YouTube Channel has a lot more “Indie Music Minute” videos that features Tony van Veen, CEO of Disc Makers, distributing nuggets of information and actionable ideas to help you make the most of your career as an indie music artist. Keep checking back, because there’s always more to come!

Related Posts
A release strategy to fill your yearly calendar
There’s a CD revival in the making
The MLC’s $424 million royalty distribution conundrum
Your copyright and royalty questions answered
The vinyl manufacturing process at work (watch the video!)

20 thoughts on “How Much Does Streaming Pay?”