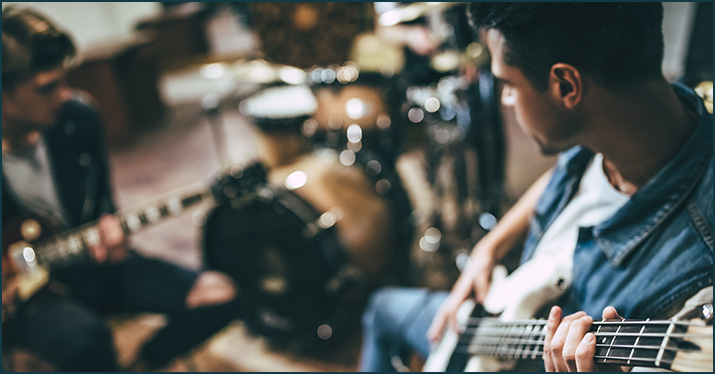 There are lots of recipes for successful band rehearsals and these tips might help you refocus and prepare to rehearse with purpose.

I recently started playing with a jam band — which is a fun a change of pace for me — and it’s reinforcing something I’ve long known: there’s a distinction between winging it and improvising. Improvising works when there’s a solid foundation that provides the players a platform on which to confidently explore and make music in the moment. Without that solid foundation, you’re winging it, and there’s a tentativeness because no one is sure where the changes are and where the song is going. For most of us mortal musicians, the only way to achieve that solidity is through lots of live gigs and structured rehearsals.

Have a plan for rehearsal

Let me begin by stating something obvious: these are all guidelines. You might have a plan for a rehearsal — like, “we’re working on songs 1-6 in the set and were going to hammer them and uncover and fix any trouble spots” — and then someone might play an inspired riff that takes the band into an songwriting exploration that no one planned for. You want to allow for these sorts of creative moments and foster them. A healthy band environment is one where people aren’t afraid to take chances, stretch themselves, and sometimes sound awful in the process. Maybe the first five ideas are too out there or don’t work, but the sixth one is magic. You would never get to that sixth idea if there isn’t a sense of mutual trust among the players.

I’ve been playing in bands for well over 30 years (ouch) and have been involved in all sorts of projects — original bands that gigged regularly, acoustic projects that were entirely for the entertainment of the players involved, cover bands that were gigging weekly, others that scored a show every couple of months. In each environment, the rules and expectations of rehearsal were different, but my experience has taught me that setting rules and expectations is the first step toward being productive.

Ever been in a situation where the players show up to rehearsal and everyone’s looking at each other saying, “what do you want to play?” Sometimes that leads to something inspired taking place. Other times, a rudderless rehearsal turns into a hang. Maybe that’s OK if you practice multiple times a week and everyone needs a break, but it’s not a recipe for musical progress.

If it’s a writing session, announce it as such. Tell the folks in the band to bring their newest riffs, chord progressions, lyrical ideas, finished songs, whatever they’re supposed to contribute, and come prepared to write and spend time working on something they’ve never heard before.

If you’re preparing for a gig, have a strategy. Do you have three rehearsals leading up to it? Have a plan for how to make the best of them. Is playing the same set over and over the best approach, or are you better off concentrating on a handful of songs, hunting down the problem spots or finding places to try new things — dynamic shifts, extended solos, harmonies, instrumental sections? Make time to hone and refine the set and concentrate on improving the arrangements and overall sound.

Don’t expect things will work themselves out at the show

This works on an individual level as well as a band level.

As an individual player, focus your practice on parts that you find challenging. The old saying that “practice makes perfect” has been superseded by “practice makes permanent.” If you repeatedly practice something with poor technique, or something that’s flat-out wrong, you’ll embed that error into your playing. So the saying “perfect practice makes perfect” is more accurate. You’ll never be perfect at anything if you never practice it — you might get lucky once in a while — but the only way to know you’re going to nail a part is to practice it until you don’t have to think about the technique or the mechanics, you just play it.

Why not start your personal practice with something you’ve mastered, something to get you grooving and confident and acclimated to the sound and feeling of playing that day? Then it’s time to move onto the things that you’re struggling with or that need polishing. Spending all your time practicing the things that come easy or that you’ve mastered won’t help you improve. You need to push and challenge yourself and be okay with discomfort with a part or your inability to play it to your satisfaction the first hundred times.

The same is true as a band. Start with a tune that’s squarely in your wheelhouse, then venture into the meat of the rehearsal. If there’s a predictable problem spot during rehearsal, chances are high that it’ll fall apart onstage. Just this week, I was practicing with the acoustic trio, we’re getting a set of cover songs together, and the guitarist kept jumping to the chorus early in this one song. We pointed it out, rehearsed it once correctly, then moved on. But I knew we should have pounded that section over and over. Yes, it’s redundant, and it was a simple enough part, but I knew he didn’t quite have it engrained.

We had a productive rehearsal and decided to head out to a local open mic to get in front of some folks. We played the song in question, and don’t you know we messed that change up twice in the same song — including a section we had never screwed up before. The lack of confidence in that part led to a mistake onstage, and that mistake made him second-guess the part later in the song.

This is good guitarist and this is a not a complicated song, and that’s what makes this all the more subversive. If there’s a part that is confounding one or more players in the band, for whatever reason, don’t just run through it once and call it done. Make certain you fix it, find ways to help one another remember and retain the part, and then work on it at home. If you’re 25 percent likely to screw it up in rehearsal, your chances of screwing up live onstage double.

Work out the entire song, including the endings

I’m the new guy in the jam band I’m playing in. I’m there to provide drums, backing vocals, and some new blood — half the band knows each other from previous ensembles. My one beef is the band skews toward loose arrangements. In rehearsal, once a song is rolling and we’ve locked into a groove, we’re good to move on to the next tune. Some of this is born of necessity — we had a three-hour gig booked before we had ever rehearsed and had two practices (for a combined four hours) to prepare, neither of which included the entire band.

Fact is, the band is in trouble if the drummer doesn’t know where things are headed. I can wing it with the best of them, but that might serve for some fun once or twice during a set. Our rehearsals rarely took us through the entirety of a song; we’d get one started, get about 2/3 through, and then it would be, “OK, sounds good, let’s work out that bridge.” We’d work out the bridge and move on. More than once I stopped the proceedings to insist we work out the ending, but there were too many songs and not enough time.

Predictably, we had moments that fell apart on stage. There were lots of great moments for sure, and some of them were songs that were loosely rehearsed — the players are pretty seasoned. But there were other moments that just had a sense of freefall that resulted in half of the band going in one direction while the other half was heading somewhere else. And too many times in the show, the leader turned to me and said “take us out of the song.” That works sometimes, but if 3/4 of your set has a count-out ending, that can make for a stale dish.

This is obvious: if you’re going to rehearse a set of songs, or incorporate new tunes into your repertoire, know them when you arrive at rehearsal. Nothing kills a vibe better than having three band members ready to go while the fourth is noodling around trying to figure out the chord progression. Once in a while, OK it happens, but knowing your parts is step one in playing in a band.

One thought on “Make the most of rehearsal time”