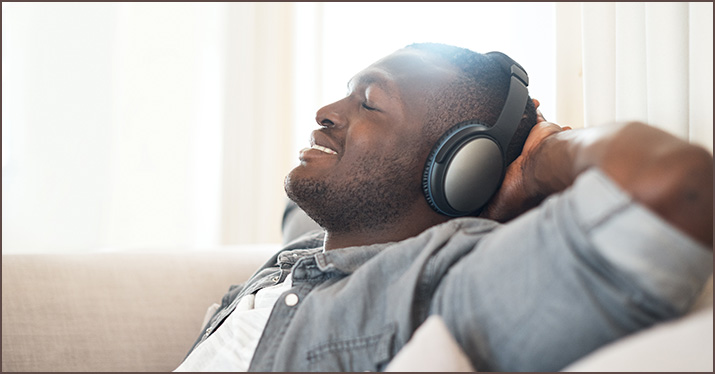 When learning a song or diving into ideas for music production, multiple listens to an inspiring track can help you discover arrangement and recording tricks that you can apply to your own music.

When I starting gigging professionally as a teenager, I also started listening to music differently. I would take any track that moved me, put on a good pair of headphones, close my eyes, and listen to it four or five times on loop. Each time I listened, I would focus specifically on a different musical element.

If I was listening to a rock recording, like Metallica’s “Nothing Else Matters,” for example, I’d zero in on James Hetfield’s vocals the first time through, paying attention to when he sang with a clean tone versus a gritty one, when he would slide into notes versus hitting them dead on, when his tonality would change from a delicate whisper to a full-on shout.

Then, I’d listen again with only backing vocals in mind. When do they come in and how in your face are they when they appear? Do they manifest as multi-layered, whispered textures or single-line counterpoints to the lead? Where does the presence of backing vocals give the lead vocal more power and when are the lead vocals unadorned? How does that contrast work in the song?

Next, I’d listen only to Jason Newsted’s bass line. The chord progression for the song is simple and repetitive, so how did Newsted keep his parts interesting? How did he also keep the song heavy while giving it a sense of build and propulsion? And how did the rhythm of his bass lines lock in with the kick drum?

Speaking of drums, Lars Ulrich’s percussion parts would be next. I’d listen to how that cutting, signature Metallica kick drum sound helped define the overall vibe of the track, how the rhythms of the kick and snare played against the cymbals, whether Ulrich played in front of or behind or right on the beat, and how tight or splashy his hi-hat sound was at any given time.

And then there were the guitars — one listen was needed at least to focus on each guitar layer, whether it was Kirk Hammett’s delicate, Flamenco-ish interludes or Hetfield’s wailing distorted solo at the song’s climax. Could I tell which guitarist was playing what just by listening? How did their instruments’ tones mesh together to elevate the production and overall composition of the song?

Nowadays, whether I’m producing a pop track, playing a jazz piano solo, singing lead in my band, or orchestrating for a string section, I can tell just how educational and inspirational this approach to listening was for me. It taught me a huge amount about how the different elements of a successful piece of music fit together — and it can teach you a huge amount, too.

Choose a few of your favorite recordings in the world and listen to them on a loop, focusing each time on a different instrument or element. If you’re like me, doing this will help you appreciate beloved recordings on an even deeper level as you begin to understand the intricacies of the trees and not just the beauty of the forest.

Next, choose some popular and well-regarded tracks that are definitely not part of your normal listening selection. Even if you never relax with hip-hop, put on a Kendrick Lamar or Kanye West track and listen the same way. How does the syncopation of the kick drum — and the kick drum tone — affect the overall flow and power of the song? How do the rhythms, accents, and inflections of the vocals push against or work with the rhythm of the underlying beat? What other sonic elements are present, when do they come in, when do they go mute, and how does their presence (or lack thereof) help give the track its power and movement?

Similarly, even if you’re not at all into jazz, put on an old Bill Evans Trio album and listen to even a single song, focusing on a different element each time. How dense or sparse is the bass playing in reaction to the density or sparseness of the piano? Is the drummer playing a strict beat or playing around the beat? How does Evans vary his playing between thick, rich chords and single-note melodies, and how do his choices impact the playing of his bandmates?

The examples could go on, but the point is, regardless of the genre, listening closely and microscopically to well-crafted tracks can help you grow immensely as a music-maker.

The next time you have to program a drum groove for your effervescent indie pop song, maybe you’ll be inspired by a kick pattern from that Kanye track you listened to five times last month and emulate the way the pattern defined the song.

When it’s your turn to layer in synth parts with a new band you’ve been asked to audition for, maybe all of your listening to the guitar layers on a Metallica record will give you ideas on how to fold your playing into the band’s sound to elevate it and not get in the way.

When you’re singing your big show-closing anthem, maybe some of the heartbreaking timing and phrasing that Bill Evans used in his solo on “My Romance” will inspire you to approach your own phrasing a little differently.

Again, the specifics of song, style, genre, instrument, or context don’t matter here. What does matter is listening critically to all sorts of music, seeing how pieces fit together to create a song that’s greater than its individual parts, and letting yourself be inspired in wild and unexpected ways.

Do multiple listens inspire your own music making? Tell us how in the comments below.

2 thoughts on “What multiple listens can reveal about a song”