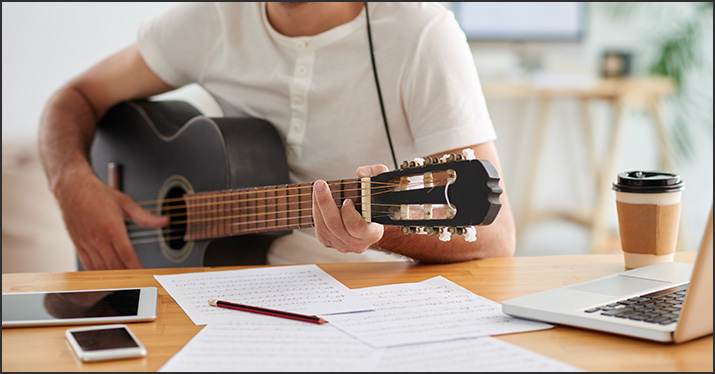 Music revenue streams that were once only available to the traditional music industry are now available to independent musicians — if you know how to collect them.

In part one of this series, we addressed how two of the five classic music roles defined by the traditional music industry still drive the income streams you can make from your music today: songwriter and artist. In this post, we’re going to cover three roles that artists usually think are out of reach but can be collected for yourself — label, publisher, and producer.

While the music industry labels these as separate roles and carefully collects and separates the money to be delivered, as an independent artist, each one is likely handled and collected by the same person: you.

Here are the three additional roles you may be filling and the revenue streams you’re entitled to if you tap into them:

Traditionally, one of the biggest revenue streams for music labels was the sale of sound recordings of physical products like CDs. Today, as the world shifts to streaming, this revenue stream is shrinking in favor of mechanical and performance royalties. That said, any time you sell a copy of your sound recording as a physical product — CD, vinyl record, USB drive, digital download card, or cassette tape —you’re owed money since you own the master right to sell the copies to the public. This right grants you a monopoly to sell your sound recording to the world, which also includes digital downloads at iTunes, CD Baby, and other digital music stores.

In 2003, the United States Congress created a new revenue stream for sound recordings. This founded SoundExchange, a special Performance Rights Organization (PRO) that collects money from non-interactive streaming or digital radio services such as Pandora, Rdio, Spotify Radio, and Live365. SoundExchange collects these payments for you if you’re registered as a “Sound Recording Owner” and the sound recording is in their database so they know what to look out for and who to pay.

Anyone who wants to use your sound recordings in TV shows, videos, films, advertisements, or movie trailers needs to pay you a fee to license it. There is no upper limit on what you can charge, and if you don’t grant them a license, they have no right to use the music. To boost your chances at getting your sound recording placed, get to know music supervisors and offer your work, or work with services like CD Baby Licensing which make your music available to music supervisors. This synchronization fee is paid by whoever is producing the audio-visual work.

Any time someone wants to use a sample of your sound recording for their song or in a mashup — no matter how short a snippet it is — they need to pay you a license fee. Once again, there’s no upper limit on what you can charge, and if you don’t grant them a license, they have no right to use the sample. This is paid to you by the label or musician using your sound recording.

Any time someone wants to use your recording for some use not listed above, such as for a toy, greeting card, app, singing fish, etc. you’re owed money. This is paid to you by the company or manufacturer of the product using your sound recording.

Traditionally, publishers promote and help place compositions in TV, films, commercials, and other audio-visual works. Publishers would also work out sheet music deals and try to find ways to make money from a song. This role entrenched itself in the music industry so deeply that copyright law requires 50% of the performance royalties paid out to the publisher. That means, if you’re an independent musician who writes songs and you don’t register with your PRO as the publisher of the song, you’re leaving this royalty on the table. The publisher is entitled to many revenue streams, so make sure you’re collecting all these:

Similar to a songwriter’s composition performance royalties — which we covered in part one — any time the composition you represent as a publisher is played on radio, TV, movie trailers, commercials, or otherwise streamed or performed, you’re owed royalties. These are paid by the users and venues, but instead of paying you directly, they pay Performance Rights Organizations (“PRO”) like ASCAP, BMI, or SESAC. These PROs then pay you a share of the royalties based on the amount of performances of your music. This is determined by surveying these venues, radio stations, and other users to see when and how often your music is played. You can also submit set lists of your own live performances of your music at venues since that counts as a performance as well. Fifty percent of the money is paid to the publisher by your PRO, so make sure to register yourself to get this share.

Whenever the composition you represent as a publisher is licensed for use in an audiovisual work, you’re owed money, just as the songwriter is. The publisher usually networks with directors, music supervisors, and film studios to pitch their songs. If you’re your own publisher, then you can do this too, but it takes time and networking, which is why it was delegated to someone separate from the songwriter/artist in the first place. If you’d like a more passive way to boost licensing opportunities, try services like CD Baby Licensing which have a browsable music library and handle the transactions should you get licensed. This synchronization fee is paid by whoever is producing the audio-visual work.

Any time the song you represent as a publisher is used in a terrestrial radio commercial or advertisement, you’re owed money. This is usually paid to you by whoever is producing the commercial.

Any time someone wants to use your composition for some use not listed above (toy, greeting card, app, etc.), you’re owed money, just like the songwriter is. It’s the role of the publisher to create these revenue generating opportunities on behalf of the songwriter by networking with businesses and working with them. This is paid to you by the company or manufacturer of the product using your composition.

As the producer of a sound recording you can tap these revenue streams:

If you produce for other artists, then the artist, label, or songwriter may pay you fees for your time and expertise or may give you a percentage of the music sales. In addition, you can negotiate a share of the songwriting credit with the songwriter. This would make you a songwriter on the composition and give you the same rights to tap all the revenue streams available to songwriters. This would be worked out in a written agreement between you as the producer and the songwriter(s).

In the United States, producers can get sound recording performance royalties from SoundExchange if the artist designates a “letter of direction” specifying you as the producer of the track and gives payment details. SoundExchange will then pay royalties any time the sound recording you produced is streamed on a non-interactive platform, but only if the letter of direction is submitted.

When you’re dealing with a group of musicians in a band or music organization, the responsibility for these roles, as well as who gets the income from them, can be difficult to sort out. To solve this, and because there’s money involved, many bands or music organizations put together an agreement to clarify these questions and pull something together that everyone can read and agree to. While putting together an agreement is hard, dealing with money issues if there’s no clear understanding can be even harder, so it’s a good idea to handle this up front.

Read Part I of the series.

To get these income streams, you need to register with each collection organization associated with the royalties that are mentioned here. We cover the 14 registrations and all the steps you should take before you release your music into the world in our book, Making Money With Music.

Related Posts
Collect everything your recorded music can earn: Pt. I
Don’t miss out on SoundExchange royalties
The people who make music, Part I: Musicians, songwriters, and engineers
The people who make music, Part II: Artists and producers
Work For Hire agreements from a musician’s perspective
Work For Hire agreements: The producer’s perspective

Get your weekly jam session of knowledge, exclusive coupons, freebies, and other indie music must-haves only from Disc Makers.