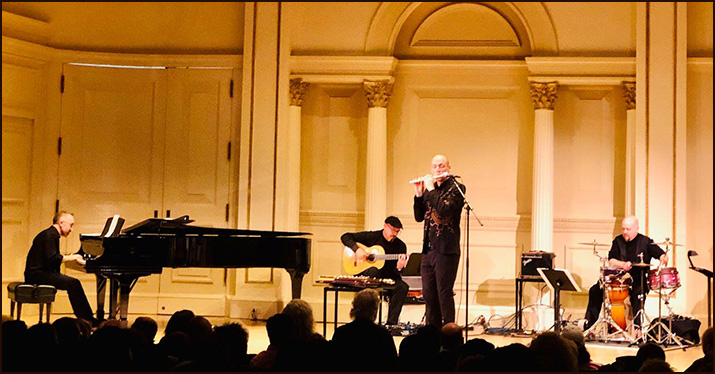 When I had the opportunity to be playing at Carnegie Hall with the great Wouter Kellerman, I had to say yes. With the gig five days away, thoughtful, strategic practicing helped get the music where it needed to be in a short amount of time.

In “8 tips to help you learn new music … fast,” I talked about strategies to help you get up-to-speed on large amounts of new musical material in small amounts of time. Last November, I had the opportunity to put those principles into practice when I got a call about a pretty amazing opportunity to be playing at Carnegie Hall, in just five days.

My job would be playing piano in a quartet supporting the great Wouter Kellerman, an outstanding, Grammy-winning South African flutist and world music artist. Wouter and I have known each other for years — I contributed keyboard parts to his Grammy-winning album, Winds of Samsara (with Indian composer Ricky Kej), and his Grammy-nominated solo project, Love Language. The Carnegie set would be 30 minutes long and, while I am quite familiar with Wouter’s music as a whole, I would be learning this material from scratch.

Here’s how I tackled the situation:

As suggested in the previous article, I started by listening to the songs as regularly and often as possible. This included active listening, where I went through the chord changes or melodies in my head, played along on the piano, or followed along via the sheet music and chord charts that Wouter provided. It also included passive listening, just having the songs in the background as I did other things. Both approaches were valuable, and helped me internalize the music in a short amount of time.

Focus in on my specific role

Early on, Wouter told me that what he most wanted from the piano was color and texture, rather than strict adherence to the notes as written; this was a new band that he would be performing with, so it was each of our jobs to find our appropriate parts, within his overall vision, and make the music come to life. Given this, I focused my prep time on learning the melodies, chord structure, and song structure, laying the groundwork that would allow me to add the touches and flourishes Wouter was looking for.

Rehearse as if the gig is in an hour 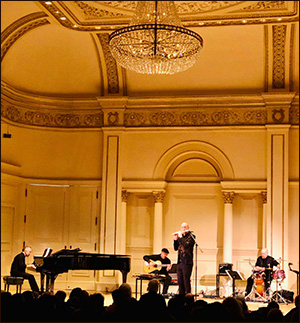 Luckily, we had time for three rehearsals and a soundcheck before the concert, so there were plenty of opportunities to come together as a group and polish our sound. That said, I still needed to make the most of every minute that we played together. That meant a song-by-song and rehearsal-by-rehearsal triage of what, on my part, needed the most work.

Wouter’s song “Irish Hornpipe Melodies,” for example, had a tricky chord progression, but my part was simple, rhythmic chords throughout. Did I need to take up rehearsal time asking questions about that tune? Not at all — as long as I ran the chord progression on my own enough times to properly internalize it, I was good to go.

Alternately, the piece “Folies” was a true challenge. The song changed from a Celtic feel to Bossa Nova, 4/4 to 6/8, and beyond, multiple times during the song — and it was my job to rhythmically lead several of the transitions. I made a point of asking to run those transitions, with the full band, as often as we had time for, since I knew that that was an exposed part that was vital to the success of the performance.

In other words, even though I wasn’t the one leading the rehearsals, by quickly identifying where my own biggest trouble spots were, I was able to ask for the time and help needed to get the songs where they needed to be.

Take all feedback — and ask for more

Since Wouter was the artist and bandleader, his satisfaction with my playing — and the band overall — was the most important factor. I have always enjoyed working with Wouter and appreciate the way that he communicates creatively, so whenever he had ideas on how to hone my performance, it was helpful to hear. Also present at two of the rehearsals was an outstanding pianist who regularly collaborates with Wouter and helped arrange much of the material; his feedback was invaluable as well.

Wouter made it clear that he wanted my playing to sound like me, even though we were playing his material, but taking all feedback from him and his collaborator helped me understand the framework in which I could express myself while still realizing the songs in a successful and faithful way.

Last but far from least, feedback from my bandmates was key, and I welcomed all reactions that were given. When I missed a transition early in rehearsals, they pointed it out and we talked over ways to make it smoother. Similarly, when I played a certain solo in rehearsal, they gave me very positive feedback, which was great to hear and reinforced that I was on the right track with that particular approach to playing.

Sleep, eat, and do other things

Prepping for a big gig with limited time isn’t the same as cramming for an exam — while pulling an all-nighter and absorbing as much information as possible might work when you’re trying to pass a test, for me at least, a certain amount of self-care is critical, even when the amount of material is daunting and the downbeat is rapidly approaching. After all, the best way I could set myself up for success was to show up the evening of the concert rested and ready to listen, react, and support Wouter’s playing.

While I made sure to devote plenty of working hours to learning and practicing Wouter’s music, I made sure it didn’t compromise my sleeping or eating. Similarly, I made time for family and friends in between rehearsals and practice sessions. I often found that, when I returned to the material, even after a brief break doing something else, I had a fresh perspective on it and felt like it was part of me more than it had been even an hour earlier.

Keep it simple — but know where to stretch out

In situations like this Carnegie Hall performance, I took a “less is more” approach — and it paid off. The songs were already so rich, and Wouter and the band were performing beautifully, so sparse playing — as Wouter had said, simply to add color, texture, depth, and propulsion where it was needed — was the biggest recipe for success.

But the more we rehearsed, the more I picked out places where I could expand my playing, let loose a little, and improvise in the moment. Regardless of whether what I was playing was complex or simple, I tried to give the music exactly what it needed at any given moment — nothing more, nothing less.

With Wouter’s sheet music in front of me, I took copious notes to help me internalize the arrangements as quickly as possible. For one song, I found it challenging to remember every single repeat, so I circled them on my lead sheet. For another, the chord pattern had shifted since the chart was written, so I wrote in the new changes. For yet another, the ending rhythmic cadence was a rapid and challenging one, so I wrote out the rhythms as a bookmark to help me mentally prepare as the piece neared its raucous conclusion.

In the end, I’m proud to say that our collective efforts paid off. Our performance received a standing ovation, and I couldn’t have been happier with how it went. The next time a time-sensitive opportunity like this comes along, I’ll take this Carnegie Hall experience as further proof that lots of material can be learned and made performance-ready in a short period of time. Thoughtful, strategic, and focused practicing can always help you get your music where it needs to be, when you need it.

Do you have any stories of having to learn and perform lots of new music with minimal warning? Tell us in the comments below.