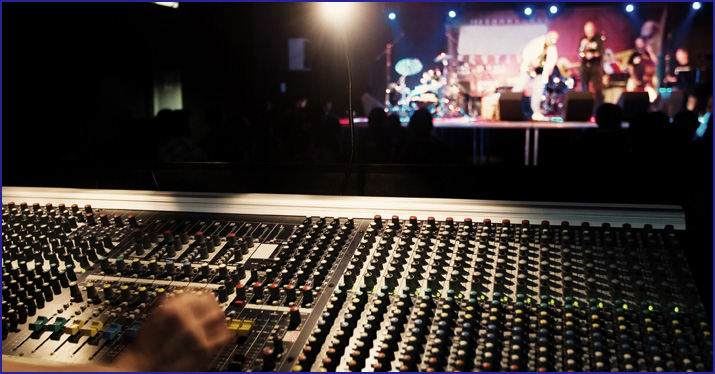 Going to a professional studio for the first time can be an exciting and intimidating experience. If you aren’t prepared, it can also be much more expensive than it needs to be.

I recently went to a professional studio with my band to record an EP, and since it was my first time, we made lots of mistakes that ended up making the recording sessions take much longer than necessary. These mistakes resulted in us spending hundreds of dollars that, had we been more prepared, could have been used for something else, like getting discs made for the EP.

Here are five things you should do before you go to the studio to maintain focus and efficiency.

1. Have a well-defined vision for each session

Before each studio session, it’s important to form a vision of what you want to accomplish.

Whatever the case, make sure you know what you want to get out of each session – and be realistic about it. If you’re booking a single day, for example, you probably won’t have time to finish an entire song if you have several instruments that need to be tracked. My band programmed the drums for our EP to save time, but even then, our most efficient song took two sessions to complete.

When you go to the studio, knowing what you want to complete can make things run smoothly and help you avoid disappointment.

2. Finish writing your songs – and have demos

Some artists go to the studio with a vague idea of what they want a song or part of a song to sound like. This can very easily eat up hours of your session time and can become a huge setback.

Instead of winging it, make sure your songs are fully written and arranged before you come to the studio. Have every part, every instrument, and every layer of the song planned out so you don’t waste time trying to write and practice your parts in the studio before you record them.

To be really prepared, have demos of your song recorded. Often, hearing a part on a recording changes your perspective of it. My band had a chorus for one of our songs that we thought was great, but once we recorded it, it obviously needed work. After we started demoing our songs, this became less of a problem since we could address these issues before our studio sessions.

My band members have recording equipment, but if your band doesn’t, try to find someone local who does. To do this, join local music groups on Facebook and network with the members of the group to find someone who can help you. You can find these groups by typing “your city musicians” into the search bar.

3. Don’t expect too much from mixing and mastering

Lots of musicians have the misconception that mixing and mastering will completely change how things sound. This is true, to a point: a great mixing or mastering engineer will make a song sound miles better than the rough mix. However, they can only work with what exists in the tracks.

Here’s what I mean – if you record a guitar with a Fender Twin, the mixing engineer can’t exactly make it sound like a Marshall. These amps have different characteristics that can’t just be added in. During the mixing and mastering process, your engineer will use the frequencies available to him to dress up what’s already there on the track.

So if you don’t love your guitar tone, fix it in the studio before the mixing and mastering stage.

Additionally, you want to make sure your performances are clean before you leave the studio. If you strike a chord and there’s some fret buzz, fixing this issue during the mixing stage might remove some important frequencies, making the guitar sound much smaller than it otherwise could, so pay attention to these things while you’re tracking.

4. Bring the necessary files and plug-ins

A great way to save studio time is to complete some of the recording before you arrive. This could include programming the drums for your song, bringing the effects you want included in your song, having the tempos set for your click tracks, or recording DI electric guitars that you can bring to the studio for re-amping.

My band decided to program our drums before we got to the studio. We used software that was different from what the recording engineer used, so there was some tweaking involved, but nothing too excessive. Doing this potentially saved us days of studio time, and for metal, programmed drum samples can often sound better than live drums.

For our next studio session, we plan on attempting as much as we can on our own before we head to the studio. Worst case, if it doesn’t sound as good, we just do it again during our studio time. Best case, we save lots of time and money.

Our last few studio sessions were extremely effective because we created a to-do list and organized tasks by the instrument.

Switching instruments in the studio is time-consuming. When setting up to record guitars, you need to set up the amp and cabinet, get the microphones in place, and tune your guitar (which, for a studio recording, can take quite a long time). For vocals, you need to find the microphone that best complements the vocalists’ style. My band has a screamer and singer, so each person required a different setup.

Because of this, organizing your session by the instrument can be very effective. Do all of the parts for each instrument at once so you aren’t jumping back and forth and wasting time with setups.

Nicholas Rubright is the founder and editor of Dozmia – a blog dedicated to helping musicians with everything — from finding band members to gear choices to growing a fanbase.

Related Posts
Preparing to record in a professional recording studio
Prepping for the recording studio, Part II
10 Practical Tips For Recording Amazing Guitars
Why you can’t tune a guitar – and how to fix it
Three easy fixes to improve your guitar tone when recording