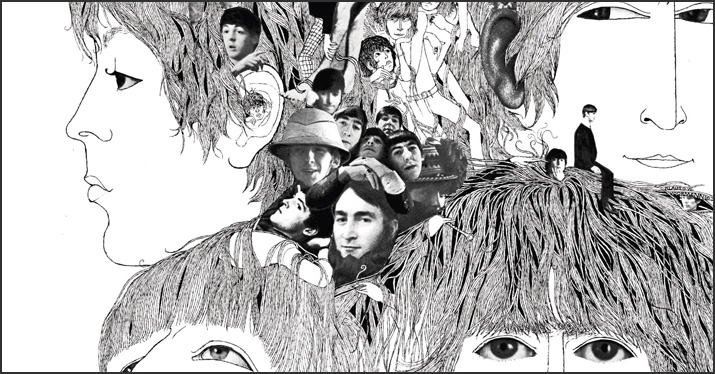 Though labeled a Lennon/McCartney song, “She Said She Said” was more truly a Lennon/Harrison song that was a late addition to one of the pivotal albums in the Beatles’ esteemed catalog.

We’ve all been there. You’re at a party and there’s this annoying twit who won’t stop talking to you about something you have no interest in. Worse still: he won’t go away. Now imagine you’re in an altered state (in this case, tripping on LSD) and this twit is saying something you find frightening: “I know what it’s like to be dead.” He tells you how he accidentally shot himself when he was a kid and he died on the table three or four times, and then, to prove his point, he even shows you his bullet wound.

How many of us would be able to turn that into an amazing song, much less one that would prove to be one of the more influential songs of its era?

If you’re a Beatles fan, you may be aware of this incident. It happened at the end of August at a house in Los Angeles, where the Beatles were resting during their 1965 American tour. They were having a party and they had invited a bunch of people, including members of the Byrds and some actors. The twit in this scenario was actor Peter Fonda, who was unknown to the Beatles at the time. He was telling John Lennon and George Harrison about his near-death experience as the two Beatles were tripping on acid. The experience spooked them, especially Lennon, who supposedly told Fonda, “You’re making me feel like I’ve never been born.” And “Who put all that shit in your head?”

This party would prove to be a very important evening in the history of rock, not just because it gave us “She Said She Said,” but because it is also when David Crosby taught Lennon and Harrison how to play Indian raga scales on the guitar and suggested to Harrison that he check out the music of Ravi Shankar. This conversation would give the world some of the most influential songs of the decade, including “Norwegian Wood,” “Eight Miles High,” and “Tomorrow Never Knows.”

An idea is born

Lennon was never one to waste a good line. He famously grabbed several of Ringo Starrs’ malapropisms and turned them into songs (e.g. “A Hard Day’s Night” and “Eight Days a Week”). Lennon was so moved (annoyed? inspired?) by this party experience he sat down and recorded a demo.

There are a ton of Beatles demos — especially John’s home recordings — floating out there in the ether. A new box set celebrating the 50th anniversary of the White Album is coming out in November, and it will feature the legendary Esher demos featuring all four Beatles sharing their new songs. I’m sure it will be great, but I gather that these demos will present the songs mostly in finished form, at least structurally.

Some of the demos for “Strawberry Fields Forever” grace the Anthology album and give some nice insight to the creation of that song, but there, too, it seems like John already had a lot of the song figured out. I love the demos for “She Said She Said” because you can really hear John working through the songwriting process, starting with nothing more than the line “He said, ‘I know what it’s like to be dead.’”

Keep in mind that this video has cobbled several different recording sessions together and it’s not always clear where one session stops and the next begins, nor how much time has passed in between sessions. To my ears, the first 55 seconds or so are from one session, so start with that.

At this point, other than the familiar lyric there’s no resemblance to the finished song. It’s a two-chord folk ditty with no hint of psychedelia. He’s just bouncing between those two chords (here it’s G and a C — the song will eventually be in Bb), turning that phrase over and over. Lennon isn’t the only great songwriter who worked this way. Brian Wilson, famously, would hammer a phrase on the piano, over and over again, until he was able to unlock the song. Here, Lennon knows there’s something there, but he hasn’t found the key yet. He even tries jumping up a whole step to A, but that doesn’t lead him anywhere.

Around the :56 mark — and perhaps this is part of the same session, but I don’t think so — Lennon seems to figure it out. It’s his phrasing. He slows the song down and adds a space between “he said” and the rest of the phrase. This lets the lyric breathe, which seems to have been the breakthrough moment. Also, we can hear some echo on his vocal. It’s the first time we get a hint of psychedelia. The demo suddenly goes from Dylan to Skip Spence.

At 1:07 we definitely get a new session. He now has more lyrics. He’s still just playing two chords under the opening line (in the final song has three), but you can hear him trying to figure out where to take the song from there. After the second line, “I know what it’s like to be sad,” he drops down to an Em and then an Am. That’s still not it, so he leaves it.

At 1:54 we finally get our home key of Bb (although the tape is a little flat). I’m not sure why he chose to change the key, after all, Bb is not very guitar-friendly, though it sounds like he’s playing with a capo on the third fret because the chord voicing is the same as on the previous sessions. On this take, we finally have our three chords for the verse: Bb, Ab, Eb. And rather than change the chords after the second line, like on the previous session, he has now settled on repeating those three chords for the entire phrase, which is what we have on the final record. (As far as Beatles’ songs go, “She Said She Said” has very few chords — four, and the fourth only appears briefly in the bridge.)

At this point, we pretty much have our verses, save for two things. One: Lennon is still using a downward melody for those first two words. On the final song, he sings the opening words using a melody that jumps up a fifth. The demo’s melody is intimate and folksy. The final song’s melody is epic and spacey. (And kind of weird when you think about it. It’s an awkward prosody.)

The other thing we’re missing is the rhythm change on the line “And it’s making me feel like I’ve never been born.” We get a sense of that, as you hear him struggle to maintain the strumming pattern, but he hasn’t explored it yet.

The bridge is where “She Said She Said” becomes one of the more intriguing songs in the Beatles’ canon, not only because the bridge is so rhythmically weird, but because of its origins.

I was at [John’s] house one day – this is the mid-Sixties – and he was struggling with some tunes. He had loads of bits, maybe three songs that were unfinished, and I made suggestions and helped him to work them together so that they became one finished song, ‘She Said She Said.’ The middle part of that record is a different song: ‘She said, I know what it’s like to be dead, and I said, oh, no, no you’re wrong…’ Then it goes into the other one, ‘When I was a boy…’ That was a real weld. So I did things like that.

I wish we had a demo from that session, but John’s original demo does give us a hint of the bridge’s rhythmic complexities. Start the demo at 3:20 and hear how he’s changing the rhythm over the words “She said I will love you more when you’re dead.” It’s the kind of rhythm you can get away with if it’s just you on an acoustic, but good luck to the band having to follow along.

What makes the bridge so rhythmically weird isn’t just that it’s in a different time signature from the rest of the song (3/4, instead of 4/4). After all, changing time signatures is something the Beatles did fairly often. Think about the bridge of “We Can Work it Out,” which stays in 4 until you get to the line “fussing and fighting my friend” and the beat suddenly switches to 3. It’s a classic ooom-pah-pah-ooom-pah-pah waltz beat. This time change is startling and adds a nice exotic touch, but it doesn’t make your head spin. You hear it once and you can reproduce it no problem. (It’s at 0:45 in the video below.)

The bridge for “She Said She Said,” on the other hand, still throws listeners for a loop. What makes it confusing is the beat changes to 3 before you even realize it. And once it’s in 3 it doesn’t feel like a waltz. It just feels like it’s hard to sing along to but you’re not quite sure why.

I’ve seen several music scholars who all analyze it differently, but here’s how I break it down.

The fact that the bridge was originally a different song doesn’t make “She Said” unusual. The Beatles used this technique before and would again (e.g. “A Day in the Life”), but usually, they try to better integrate the disparate material. Here it almost seems like it’s been cut and pasted into place. After all, it starts on the second beat of a new measure, in a new time signature, without even a second to catch your breath after “no, no, no you’re wrong.” And the odd time change feels even weirder coming on the heels of a pair of triplets (“Making me feel like I’ve never been born,” and “no, no, no”). And the reentry back to the verse feels off-kilter.

No matter how you slice it it’s weird. No wonder it took the band 25 takes in rehearsal to get it right.

Actually, “She Said She Said” almost went unrecorded — at least, it almost didn’t make it onto Revolver. When the band was mixing the album on June 21, 1966, they realized they were one song short. They knew fans would be upset if it felt like the album was a song light, but time was tight. The band was set to tour in Germany in two days. John stepped up and said, no problem, I have a song; we can crank this puppy out.

According to Mark Lewisohn in The Beatles Recording Sessions, it took them less than nine hours to rehearse, record, and do preliminary mixes of the song. All with just three Beatles. Paul McCartney left at some point during rehearsals. No one seems to remember why; it’s possible he was upset at Lennon and Harrison’s unwillingness to change the arrangement per his vision, it’s possible there was some tension owing to the fact that Paul still hadn’t taken LSD. Maybe he was feeling left out due to the John-George partnership. At any rate, McCartney left, Harrison played bass, and they finished the song in one day.

A few words about the final recording.

Related Posts
From demo to hit single: Owner of a Lonely Heart
How to write a great melody, Part 2: Putting the rules to work
Key change! How to wow ‘em with a chorus modulation
Brian Wilson’s songwriting tricks and techniques
A look at Ringo Starr’s enduring musical influence

4 thoughts on “From demo to classic: She Said She Said”