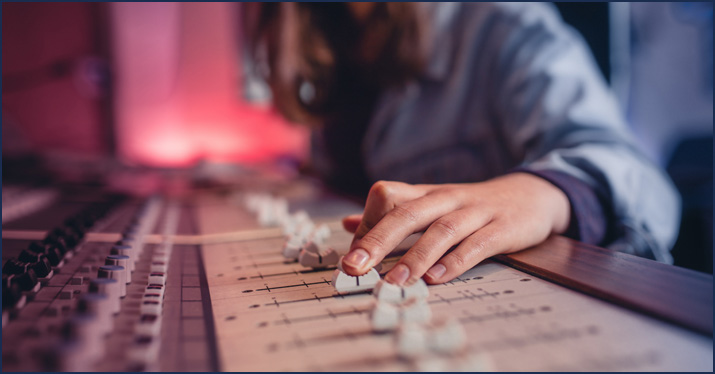 Excerpted from the 3rd edition of Disc Makers’ revised and expanded Home Studio Handbook, these basic recording tips will help you make the most of your studio time.

If you’re recording in a home studio, even if you take the time and effort to address basic acoustics, chances are your room isn’t going to compete with a pro studio environment. There may be some instances where capturing the room’s ambience and resonance is just what you want, and other times where isolating your sound source and divorcing it from the room is your better option.

In every studio environment, there are simple things you can do to maximize the quality of your sound sources, get the best performances from your players, and record the best possible sounds and tones in your studio space.

Focus on your instrument

Even in the hands of the best player, an instrument with bad intonation won’t sound good on record. Maintaining and preparing an instrument is the first step to producing a quality recording.

If you’re a vocalist, warm up and do your vocal exercises before hitting the mic. Drinking warm tea and honey to lubricate your vocal cords can help, as will wearing a scarf around your neck to keep your cords warm, avoiding smoking and dairy to keep your throat moist and phlegm free, and avoiding loud environments prior to your recording date where you may shout or speak loudly and tax your vocal cords.

If you’re a guitar player, change your strings before going into the studio — especially if it’s an acoustic guitar. If you’re a bass player and you don’t change your strings once a month, you should consider changing those strings before you bring your bass into the studio. In both cases, it will help the tone and the output and you’ll stay in better tune.

If you’re a drummer, change all your drum heads before recording. If the heads have been on for too long, they’re going to sound dull and they’re not going to stay in tune. Also, take time to tune the drums correctly — you may even consider tuning the drums differently for different songs.

As a performer preparing to record, make sure you’re rehearsed and comfortable with the parts you’ll be recording, and make sure you enter the studio well-rested and with a clear head.

Good cables can make a big difference, so make sure they all work and don’t rely on cheap product. Make sure all your input jacks and connections are working, and use a can of spray air to clean out any pots or faders that might have dust built up.

Create a comfortable, but functional, environment

For artists who do not have a lot of experience in the studio, the transition from a rehearsal or performance environment to the studio can be very uncomfortable. As a producer/engineer, creating an environment that is physically and emotionally accommodating can go a long way to improving the mindset and potential for performance from your talent.

There is one constant, true for all recording studios and engineers: keep experimenting. The only way to know what sounds good and what to avoid in your home studio is to try different approaches to the same scenario. So much of the art of engineering, producing, and recording comes from trial and error and constantly honing your ears and your technique.

“I’ve learned a lot watching creative engineers at work,” says Drew Raison, a Philadelphia-based engineer and producer. “Steve Albini worked in my studio, and he was laying microphones just above floor level. There’s an evil little echo, that first reflection echo you are typically trying to avoid. He wanted to harvest that. To me, that was a huge question mark. Why would you want to do that? And then I heard it and I was like, ‘Well, boy, there it is.’ It is an acquired taste, but his management of acoustic space was eye-opening.

“I rarely use what I learned from him in my own recordings because I’m not looking for a radical departure from a given tonality, but you should never hesitate to experiment. This is your opportunity. Analyze and decide, ‘Did this work or didn’t it?’ and ‘What can I do to make it better next time?’ That’s what makes a home recording enthusiast become a producer over time.”

Don’t run too many devices in series with one another. Limiting the number of components in your chain will usually provide a fatter tone. If you’ve got a mic preamp, an EQ, and a compressor in the signal chain, you’re probably doing that for a reason, but sometimes that can negatively affect the sound. If you’re not happy with the tone you’re getting on record, try going right out of the preamp into the console and deal with the EQ and compression later. Sometimes simplicity is the way to go, and getting a more natural tone recorded should be the goal.

When you’re recording and mixing, you don’t want to have lots of overlapping frequencies. If you’re cutting percussion, for instance, and you don’t need anything below 80 Hz, you can use a high pass filter and allow the highs to pass through while cutting off the low frequencies so you’re focusing that instrument into the frequency range you want it to occupy in the mix.

Conversely, if you’re recording bass guitar, you probably don’t need all the top end, so take some off the top with a low pass filter. Filtering out the frequencies that don’t need to be there will help keep the mix articulate and clean.

Sometimes, the low end or highs that you’re not capturing (or that you have too much of) are a result of poor mic placement, using the wrong mic, EQ settings on the instrument or amp, or the angle of the mic in relation to the instrument. Adjusting any one (or more) of these elements can make a big difference without having to touch the EQ, especially if you’re trying to capture more high end. Pushing the high end on an EQ can bring unwanted noise into the track and the mix.

Much of the art in recording comes from mic use, placement, and angle. A lot can be accomplished by adjusting the angle of the mic and testing multiple placements for tone, both in relative distance to the sound source and where the mic is pointing.

Limit compression and EQ when recording

While many engineers will use some compression and EQ when recording, be cognizant that the decisions you make at the time of recording will remain with that track. Some things can be undone, but others can’t, and if you over-compress or over-equalize, you’re largely going to be stuck with it. When you’re recording, make it your priority to acquire the performance to the best of your ability. Then when you’re mixing, make the critical decisions regarding compression, EQ, and other effects.

While recognizing and avoiding phase cancellation takes experience and understanding, using a 3-to-1 ratio is a good place to start in your home studio when using more than one microphone to capture a sound source. 3-to-1 means the second microphone should be three times (or more) the distance from the source than the first microphone. Bear in mind, if the sound source or your microphone is close to a reflective wall, that could cause another phase cancellation. In a gigantic empty space, the 3-to-1 rule generally works. It also works in a smaller space, but you have to deal with other artifacts like early reflections, reverberation in general, standing waves, and nodes.

“An out-of-phase signal can cause instruments to disappear from your mix if somebody’s speakers are wired incorrectly,” says Raison. “In a home environment, you have to be doubly aware of this because you’re working in smaller spaces and potentially have greater possibility of phase problems.”

A musician, writer, and marketer, Andre Calilhanna manages and edits the Disc Makers and BookBaby Blogs. Email Andre at andre@discmakers.com.

Related Posts
The essential studio gear for your home studio
Using compressors and limiters
Signal Processing For The Home Studio Owner: Part 1, Compressors, Limiters, and EQ
Choosing a signature vocal mic for your studio
Isolation headphones and your home recording
Psychology and the music producer