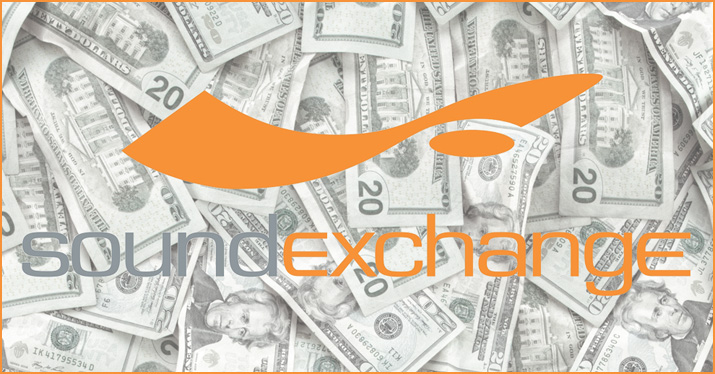 SoundExchange has paid out more than $5 billion to its more than 155,000 members since its founding in 2000. Do you have SoundExchange royalties waiting for you?

If your music is available on any of the thousands of digital Internet distribution platforms available today and you don’t know about SoundExchange, you’re most likely missing out on income that you should have received. If you are the featured artist on a track or album, and/or own the master recordings of your songs, SoundExchange may have royalties for you waiting to be paid out. Read on to learn how this innovative digital rights service tracks and pays featured artists and sound recording copyright owners whenever digital transmissions of their music occur.

SoundExchange is a non-profit music rights organization that was founded in 2000 as a part of the Recording Industry Association of America (RIAA) and in 2003, with the dramatic growth of webcasting, was spun off as a standalone company. Located in Washington, DC, it collects and pays out royalties to master recording copyright owners, featured artists, and session musicians whenever their music is used on a webcast. How much are we talking about? As of 2017, SoundExchange has paid out more than $5 billion to its more than 155,000 members since its founding. In 2017, SoundExchange collected $652 million on behalf of its members for the use of their music on digital music platforms around the world. Overall, SoundExchange payments represent roughly 16% of U.S. recorded music revenues.

The need for such a service began with the passage of the Digital Millennium Copyright Act in 1998, as Congress established a compulsory license for webcasting music on the Internet. The law stated that the copyright owners of a master recording (aka “sound recordings” or “audio-only recordings”) had to allow any webcaster to play their music in exchange for the webcaster paying a standard royalty rate to that copyright owner for each play.

In addition to the major players listed in the chart, SoundExchange currently works with online music providers of all sizes down to small non-profit webcasters. They continue to add more music platforms every month and now collect royalties from more than 3,100 music services around the world. At the end of the day, SoundExchange is set up to help ensure that rights’ holders and performers are properly compensated whenever and wherever their music is played non-interactively online. And, best of all, becoming a member of SoundExchange is free to artists and master rights holders.

How does SoundExchange work?

Digital service providers (DSPs) register with SoundExchange and provide data on what music is playing on their various channels. Through a series of formulae, which vary depending on the type of digital radio service or webcaster the DSP is, fees are paid to SoundExchange and then distributed to the members who control the master rights or were the featured performers.

In 2017, SoundExchange retained 6.8% of the total royalties collected to cover the cost of its operations. The remaining royalties were paid out to registered SoundExchange members as follows:

Note: if you are not the featured performer, you must contact AFM or AFTRA to determine if they are holding any SoundExchange income in your name.

Note: some aggregators who distribute your music across DSPs will cross-check the SoundExchange database of master rights holders to see whether or not the label is already registered as a member of SoundExchange. In the case of CD Baby, if your label isn’t already a member, they will register your label and that current release for a percentage of revenues earned by the release. Featured artists will still need to register directly with SoundExchange.

What if you’re already a member of ASCAP, BMI or SESAC?

If you write your own music and are registered with one of the three U.S. Performing Rights Organizations (PROs), the royalties that SoundExchange collects and administers are completely separate from any money your PRO collects and pays to you for public performances of your songs (live, radio, television, etc.) That’s due to the fact that since 1972, each master sound recording has its own distinct copyright, which is separate from the song copyright that is represented by the music and lyrics that form the basis for your song.

Confusing? Just consider that if you are a DIY artist that performs, records, and releases your own music and are not tied to a traditional record label contract, you are more than likely the featured artist and master recording owner. Larger record labels, major or indie, will most often require artists to sign over the master rights to the label in order to maximize label income and to help them offset the cost of making and marketing a new album. So be sure not to confuse public performance royalties — which are collected and paid by the PROs to their songwriter and music publisher members — with the digital performance royalties that are exclusively collected and paid by SoundExchange. They are two separate pots of money in today’s digital music economy.

If your music is being used in digital performances that are available worldwide over the Internet, then SoundExchange has got your back. They currently have collection agreements with 43 similar organizations representing 35 different countries so that when your music is played overseas via the same type of non-interactive web-based services, you will be paid. Click here to see the latest territories that are partners with SoundExchange.

What about producer or engineer royalties?

As a featured artist, if you worked with a producer or engineer on your album and agreed with them that they are entitled to a share of the revenue generated by record sales or other income from your album, you can instruct SoundExchange, via a “Letter of Direction,” to pay whatever percentage was agreed to in your agreement with each creative partner. SoundExchange has established a Creative Affiliates program to accommodate such splits of artist royalties when appropriate. Click here to view the Creative Affiliates program packet that provides a template for such letters of direction as well as basic information on how the program works.

In addition, if you have licensed one of your master recordings to create a new remix version, you can use the same paperwork to designate that a share of the featured artist royalties are paid to your remixer if that was in the original remixer agreement. If sharing your featured artist royalties with the creative people mentioned in this section, take some time to consult with a music attorney or a seasoned music manager whom you trust to get your questions answered before you make any moves.

The details that SoundExchange has about the role that each performer played on a given master recording are only as good as the information that was originally submitted to SoundExchange. And in many cases, there may be what are referred to as overlapping claims when one artist or performer claims the full amount of featured artist royalties, when in fact, there may have been more than one featured artist on the song or album. To help untangle these overlapping rights questions, SoundExchange started its own in-house Rights Management Department in 2012 that considers all claims regarding overlapping rights and works with all parties to resolve them.

Your clock is ticking

By law, SoundExchange is authorized to release any unclaimed digital performance royalties after a period of three years being unclaimed. That’s why it makes good business sense to become a member of SoundExchange as soon as you have music available through any of the usual DSPs. If you don’t register, then SoundExchange may pay out any unclaimed royalties to other registered members.

In the fourth quarter of 2013, SoundExchange paid out a total of $9.3 million to its registered members in the form of what they described as a “refund of administrative fees.” According to Billboard’s Glenn Peoples, the percentage of unclaimed SoundExchange royalties had declined consistently from 25.1% in 2011 down to 14.6% in 2013, although those 2013 unclaimed royalties still added up to the substantial sum of $96 million waiting in SoundExchange’s bank account to be paid to artists and master rights holders who had not yet registered. SoundExchange has been aggressively seeking to inform rights holders and artists about the monies they may have, and while these efforts have had a positive impact, there are still thousands of rights holders or artists who are not yet members.

While there are probably a dozen things you’d rather do today than tackle the registration process to join SoundExchange and upload your repertoire to its 22 million-song database, it’s worth your time. The continued growth of DSPs and music’s increasing value with new potential legislation such as the Music Modernization Act point to the likelihood that digital usage of music is only going to expand further and that rights organizations such as SoundExchange will continue to play a central role in helping to see that indie artists and label owners received the compensation due to them as part of the new music economy.

Read More
Does SoundExchange have unpaid royalties for you?
Do I qualify as a featured artist or a rights holder?
Register as Featured Artist or Master Rights Owner
SoundExchange FAQ page
Soundbyte is the quarterly newsletter for SoundExchange members. It has a lot of useful information and inside scoops on the progress of SoundExchange’s advocacy efforts on Capitol Hill to improve the rights and earnings of artists and other members of the creative community.

Keith Hatschek is a regular contributor to the Disc Makers Blog and directs the Music Management Program at University of the Pacific. He has also written two music industry books, How to Get a Job in the Music Industry, which just came out in its third edition, and The Golden Moment: Recording Secrets from the Pros He was recently featured offering a range of music industry career advice in Episode #33 of the Scharff Brothers’ Mentoring for the Modern Musician Podcast.

One thought on “Don’t miss out on SoundExchange royalties”