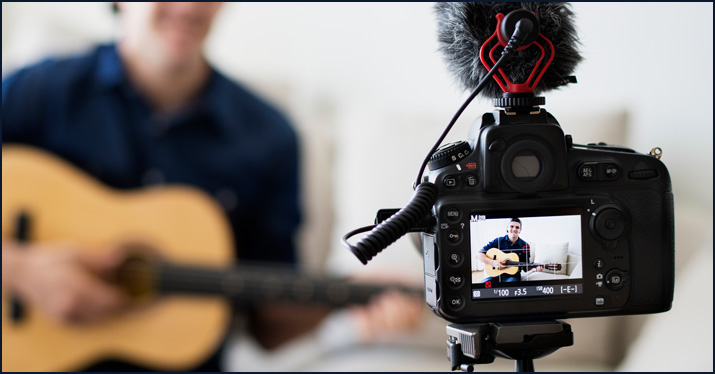 With the vast number of videos on the web, you can’t just record the same old footage and rise above the clutter. Here are 15 approaches to produce music videos that get attention.

Videos posted on video aggregators, websites, and blogs are an effective way to promote your music. But with the vast number of videos on the web, you can’t just record the same old footage and rise above the clutter. Here are 15 approaches to consider when setting out to produce your next video.

Laughter makes people feel good, so why not produce music videos that make people laugh? Singer/songwriter Dave Carroll wrote and filmed a humorous video called “United Breaks Guitars” after the airline trashed one of his instruments during a flight. Not only did the video receive over 18 million hits, Carroll received a sponsorship from a guitar case company and wrote a book on customer service. And while on the humor kick, check out “Drummer at the Wrong Gig” for another example of a hilarious video (whether it’s intended or not).

Produce music videos that depict the lifestyles of your fans and set your music as the soundtrack. If you’re an alternative, punk, or metal band, you might create videos of your songs with footage of kids skateboarding in the parks of Venice Beach, jumping the stairs at Hollywood High School, or cruising down the Hollywood Walk of Fame. To view lifestyle videos featuring skateboarding, check out Skatevideosite.com.

Use new technology to create a visually stunning music video, like End of Ever did using 360º technology. “A couple of years ago when YouTube first allowed 360º videos, and Facebook announced it was working on 360, we decided we had to be the first band doing it,” says End of Ever’s manager Sydney Alston. “We weren’t the first band to do a 360º video, but we were the first band to do a 360º full-action lyric video, and the first to post a 360º music video on Facebook. At the time I was going to the YouTube studios trying to learn as much as I could about the platform and I met a rep from Ricoh. I convinced him to help us make the first 360º lyric video, and he gave us two Ricoh Theta Cameras to use. Getting the camera turned out to be the easiest thing to do. We needed a director and someone who could edit the video. We found a young director, Aaron Brownlee, who was willing to take it on and also had the equipment to edit the video. In the end, the video cost us $800 to make. The video got 75k organic views and 2.1k shares on Facebook.”

Develop videos that feature the written lyrics to one of your songs set over cool still photographs or video footage. While lyric videos were originally created by fans as a show of admiration to the artists they loved, bands are also releasing their own lyric videos. Go to YouTube or your favorite music video aggregator and do a search to get ideas for your own.

Film and interview or a series about how you got started or how you are enjoying life on the road. Report upcoming shows, important happenings in your career, or thoughts about world events — anything that shows off a more personal side of your brand and helps you to connect with fans in an entirely natural way.

“We’ve always used video as a major tool to promote our band and music,” says Freddie Al-Hajj (Clepto), “from making small videos to promoting an upcoming show, even creating our own TV-like show, ‘Clepto Goes to America,’” which highlighted our Canada-to-California tour. Since the tour was completely funded via Kickstarter, we would film humorous ‘day in the life’ clips of us on the road merged with live performance footage and then post it to our YouTube channel to update fans and create engagement. This gave the fundraising a real-time push and showed that we were committed to the tour. This also helped get our fans excited enough to fund our next tour through Europe which lasted six months.”

Film yourself covering a hit song and capitalize on that song’s built-in audience. While there are millions of artists already doing this, there are new success stories unfolding every day. Chloe x Halle, an adorable teen sister duo, attracted Beyoncé’s attention after posting a cover of her song “Pretty Hurts.” Subsequently, the girls signed a five-year management contract to Beyoncé’s company, Parkwood Entertainment. Not bad!

Initiate a contest for the best lip-synched video of one of your singles. This might motivate your fans to create cool video content and help you spread the word of mouth. For his song, Lucky Animals, Devin Townsend inspired his fans to create humorous music videos dancing to his single. He then merged all of the fan footage into his official video. The video received nearly 200,000 views. Cool!

Use shock as another method to promote your music and get people interested in your band. Rapper Tyler the Creator released a video for “Yonkers” which showed him eating a Madagascar cockroach, throwing up, and then hanging himself. The video has over 100 million hits and counting. Shock may not work for certain genres, but as human beings are psychologically drawn to shock and gore, why not give this a try?

Record the typical music video of you performing along with one of your studio recordings. If integrating a storyline, just be sure to hire the appropriate professionals (i.e., actors, models, and/or dancers) where you might be lacking. Swedish indie rock band Dahlia didn’t use any actors in their video for the song “Gravity,” but it did hire a local dance teacher who choreographed a routine for the song. Jesper Westerlund, the band’s guitarist, explains how they got the video produced.

“We first planned how we wanted our video to look and what we wanted to accomplish. After settling on a concept, we talked to a local cameraman who worked at a nearby studio and he agreed to record us for the indie-friendly price of only $1,000. We scouted several locations to record, but jumped at the opportunity to shoot at my boss’ warehouse for free. We rigged up black molton fabric; put up some cool lights, including moving heads, sun strips, and LED fluorescent lights; and then set up all of our instruments on a stage in order to recreate a real live performance venue. It took us about two-and-a-half days to record: one evening for building up the scenery, one day to record different angles of the band, and one day to record the dancing.”

Capture footage of you performing live on stage. Club bookers and equipment sponsors typically love this type of footage since it doesn’t lie — what they see and hear is what they know they are going to get. Clubs are often already equipped to film your video for you for a small fee, though getting a quality recording of the audio is recommended.

Record a documentary about the making of your band. Film clips of the house you grew up in, the high school where your band members met, and any other behind-the-scenes footage you can think of. Fans really love this type of stuff because it helps them to learn more about the person behind the artist.

Use sites like Ustream or StageIt to present “real-time” videos for your audience. For instance, you can invite fans to tune in with you at a set hour every night while you’re recording your album and ask them for feedback. This makes fans feel like they are really invested in your cause.

“We use video and the new fast and easy technology of live streaming through Facebook and Instagram to show parts of our shows as well as to showcase the bands that come and play at our venue and studio, Doll Hut and Doll Hut Studios in Anaheim, California,” says Freddie Al-Hajj. “This definitely gives the people who are not attending the show a taste and a sense of missing out which will hopefully bring them to the next show. Doing these live streams and saving them on your profile is a good way to show your history for new fans that you might get each new show you play.”

Use still photographs of you and your band to create slideshow videos. You can use several videos that fade in and out using an awesome Ken Burns effect, or you can just use one continuous shot of your album cover and URL.

Get your videos produced by rolling up your sleeves and doing it yourself. Use high-def digital video cameras (like the ones by Canon or Sony), editing software (like Sony Vegas Pro or Final Cut Pro), and stock footage from sites like Videoblocks. You might also think about using online tools like Animoto to produce videos using photos and video clips. Just remember that producing high-quality videos yourself requires a little know-how and a lot of patience.

Indie artist Emily Zuzik presents an example of someone who took charge of the production on her video for “Alone,” only she was wise enough to know her own weakness and to outsource some of the work.

“’Alone’ has a very personal story and I wanted to get the video right. I also had some specific visual ideas for it. I’m a pretty good photographer/videographer and have both a digital Canon EOS Rebel and iPhone shooting HD video. My producer friends took my ideas and proposed that we both shoot atmospheres (them in NYC and me in Los Angeles) and upload them to a Google drive. I also shot footage with me in these “lonesome environments” using my tripod, a selfie stick, and some creative angles leaning against rocks and whatever I could find in the area. They also shot my concert at Rockwood Music Hall for some performance footage. Then my co-producer friend from Duende Vision Productions used Final Cut Pro to weave all this video together in a montage sequence. She sent me rough cuts, and we’d have phone meetings and emails dedicated to editorial changes and brainstorming sessions. Thank god for her skills because my editing efforts using iMovie have been basic at best.”

Hire a student at a local film school who has access to great equipment (which could cost you nothing or a few hundred dollars), a videographer at a club who is set up to record your live show (which could cost $100-$200), or an experienced professional who makes documentaries and videos for a living (which could cost you $3,000-$35,000+). Keep in mind that the multiple cameras, professional lighting, sound equipment, editing expertise, sound stage, make-up artists, and fashion consultants that professionals use make a big difference in quality. Contact local colleges, ask for referrals from other bands in your area who already have great videos, or do an online search for videographers to find someone who you feel can get the job done right.

Just remember that no matter what approach you take to your video, be sure to keep up to date with the latest techniques for creating and promoting video content. Search keywords like “video content creation” and “YouTube tutorials” to get basic tips about posting consistently, titling your videos, tagging your videos with keywords to make them more searchable, including links to get people to subscribe to your videos, responding to comments, and so much more. Some of my favorite tutorial pages can be found on YouTube’s Creator Academy.

2 thoughts on “Produce music videos that get attention”