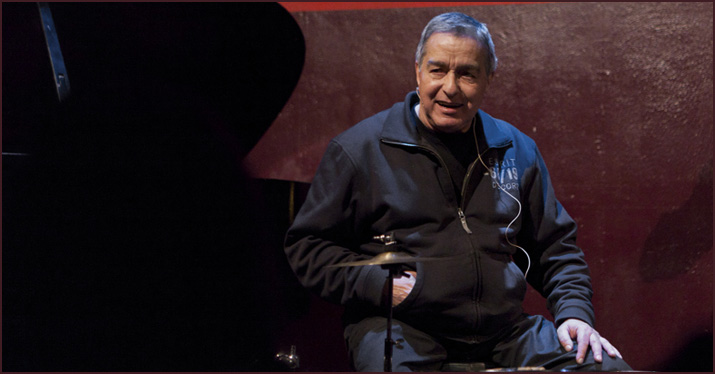 While his name may be missing from “top” lists around the web, Jaki Liebezeit forged a legacy with Can and numerous other artists on his way to being one of the greatest drummers you’ve never heard of.

For every Jimi Hendrix, John Bonham, or John Entwistle — the guys who usually land in the top 10 of those “greatest guitarist/drummer/bassist/kazooist” lists that frequent the Internet — there are dozens of lesser-known but absolutely amazing musicians who have left their mark on today’s music, if perhaps indirectly. This is the first part of an ongoing series that will focus on musicians’ musicians: musical figures who bring something unique to their craft, inspiring other prominent artists who often get more acclaim and attention.

To any fan of ‘70s Krautrock, Can’s Jaki Liebezeit (pronounced Yakee Leeb-uh-zite) is no obscure figure, but he’s not exactly a household name like Buddy Rich or Neil Peart, either. In fact, in a recent list put together by Rolling Stone of the top 100 drummers of all time, Liebezeit isn’t included. One can of course quibble with the exclusion of any artist from lists like this, but Liebezeit’s absence is astounding. Can is widely regarded as one of the most influential bands of all time (the band Spoon, for example, is named after a Can song, and Radiohead cited Can as a major influence for their albums Kid A and Amnesiac) and scores of drummers cite Liebezeit as a major inspiration.

Frankly, there are no casual Liebezeit fans. The Sex Pistols’ John Lydon called him “the most amazing drummer I’ve ever heard.” Check out the comments on any Can video on YouTube and half of them are singing Liebezeit’s praises.

Known for his precision, Liebezeit was often referred to as a human metronome. One fan joked that the difference between a drum machine and Liebezeit was that a drum machine has a “humanize” button. But if he had merely been a precise timekeeper, he wouldn’t have such a cult following. It’s not just his precision, it’s his funky, intricate-but-not-busy grooves that have drummers studying his work decades later. His style on those early Can albums combines Gene Krupa’s primal propulsive beats with the lithe stick work of Live-Evil-era Jack DeJohnette.

What appears simple is profoundly complex because it sidesteps all conventional rhythms and patterns and plays with the basics of the beat in ways that take incredible concentration, dexterity, and imagination. … He plays right on the beat but what he surrounds it with is so much symmetry [so] elegantly laid out and designed that it boggles my mind.

Perhaps the best introduction to Liebezeit is his funky, algebraic beat on “Vitamin C” from Can’s 1972 release, Ege Bamyasi. The beat is so infectious and driving the band was smart to have the drums be the lead instrument.

Liebezeit, whose last name literally means “love time,” began his music career as a jazz drummer — he even played with the great trumpeter Chet Baker. Liebezeit admired guys like Elvin Jones and Art Blakey, and he originally tried to emulate their playing. One day, however, a fan came up to him and told him he needed to “play monotonously.” That seemed to trigger something in Liebezeit’s mind, and he began focusing on repetition. “If you want to become an artist, you cannot copy other artists,” he said decades later. “You have to be original. That’s what I tried, then. To become original. It doesn’t matter if the people like it or don’t, so I cannot care about that. I have to do what I have to do.”

That “monotonous” approach of his is best exemplified on “Mushroom” from 1971’s masterpiece Tago Mago. The beat seems simple. Mesmerizing, even. But dive down a little past that driving snare, and there is a lot of subtle stick work to admire.

Liebezeit could also cut loose, as shown here in this live version of “Vernal Equinox,” from 1975, where you can hear his jazz roots.

Liebezeit was not one to play drum solos, but there was one exception. At a January 6, 1976 concert, the electricity went out, and to keep the crowd happy, Liebezeit played an 8-minute solo.

As Krautrock’s influence began to make waves outside of Germany in the late ‘70s and early ‘80s, Liebezeit became a must-have session musician. And like any great sessions player, Liebezeit altered his approach to best fit the music. He appeared on Eno’s classic Before and After Science (playing nothing more than high-hat on “Backwater”), and on the Eurythmics’ “Take Me to Your Heart,” where his restless but understated playing provides a propulsive, constantly shifting beat that provides an almost paranoid backdrop to this song. To see what a difference Liebezeit can make to a song, compare his approach on the studio version to Pete Phipps’ live in 1983.

For another example of Liebezeit’s incredible post-Can work, check out this dub-inspired noise-trance piece “Trench Warfare” from the 1982 album Full Circle, where he’s joined by Can’s Holger Czukay and Public Image Ltd’s bassist Jah Wobble. Any fan of PiL’s Metal Box will surely like this.

In the ‘90s, Liebezeit became infatuated with electronic music. This may seem like an odd choice for a drummer, but Liebezeit loved how European the music was. “It was not a typical American music anymore. I was very much interested in another way to play music and then I started to give up the traditional jazz and rock drum kit. I changed it to something else in a new configuration and also with a different drum technique.” A good example of Liebezeit’s new approach can be heard on Depeche Mode’s “The Bottom Line” from their underrated 1991 release Ultra.

Liebezeit formed many groups in the last few decades of his life and even reunited with Can on several occasions. His work with Brunt Friedman is especially interesting in how it looks back to the trance rhythms of early Can, with an eye towards the future of electronica.

I hope you find Jaki Liebezeit’s drumming as inspirational as I do. If you’re interested in learning more about his work, any Can album will do, though Tago Mago, Ege Bamyasi, and Future Days, are usually regarded as their best work. Also check out this excellent documentary.

Photo of Jaki Liebezeit by Hpschaefer from Wikimedia Commons.

2 thoughts on “Get to know a drummer: Jaki Liebezeit”