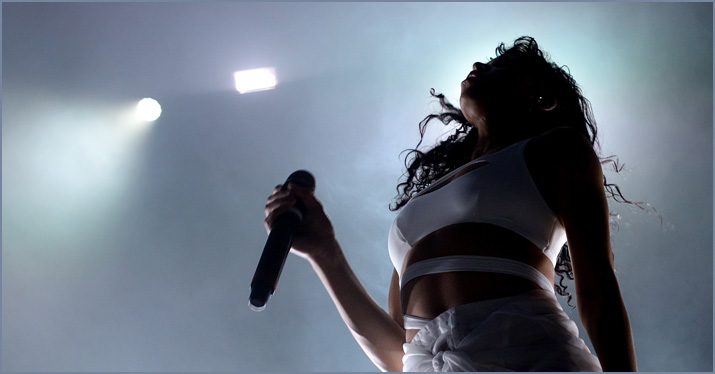 Want to launch a counterattack against homogenous music? This vocal recording advice can be the place to start.

Guitarist/producer Jim O’Rourke (Sonic Youth, Wilco) said he rarely used reverb when recording because it had become “culturally loaded.” Suddenly we realize — as echo, reverb, and compression have become so ingrained in the “professional studio sound” — that Trace Atkins, Beyonce, and James Hetfield all have the same vocal sound!

As most vocal recording advice is all about how to get the most pristine and professional sound possible, enjoy these seven ideas to experiment and subvert your vocal recordings.

Boundary, or pressure zone microphones (PZM), are not typically used in studio recordings. Most often, a PZM is an omnidirectional mic mounted to a plate, so the mic picks up all the reflections of the sound in an awkward space (e.g. inside a closed piano). But plenty of experimental engineers have their own secret recipe for getting the best sound ever! using PZMs: rolling one up in a tube made out of carpet, taping one to the ceiling above a drum set, or attaching one to a wall parallel to the neck of an acoustic guitar.

These mics used to cost $20 at Radio Shack, but the secret’s out, and these mics can cost anywhere from $120 to $399. But, you can mimic the boundary effect by placing a microphone perpendicular to a flat surface, 5-10 mm away. Experiment with different mics and different walls, singing directly into the wall from several feet away. The distance eliminates plosives caused by “S” and “P” and reduces the proximity effect you can get using cardioid microphones. Recording in this manner might produce a fairly thin-sounding track, but it could sit really nicely in a mix.

Almost any electronic device that makes noise can become a microphone when used in reverse. To turn the woofer of a three-way speaker into a microphone, you just need to sacrifice a mic cable and connect the wires (cable white to speaker red, cable black to speaker black) and you’ll have a mic suitable for bass drums and experimental vocals.

You can also use headphones — even earbuds — with no modification necessary: just attach a quarter-inch adaptor (if necessary) and plug them straight into a board. You might feel a bit silly singing into a big stereo speaker or surrounded by hanging earbuds (we recommend using several earbuds if you’re going this route, as the diaphragms are tiny and you’ll get cool stereo imaging with multiple pairs), but the tones are worth it. The low input volume of these mics works beautifully for high-SPL sources like drums and guitar cabinets, but you might need to crank up a preamp to get enough gain for a vocal recording.

3. Smartphone to the rescue

What if you chance upon a location with astonishing acoustics… whether a museum, an isolated forest grotto, or a courthouse stairwell? If you’ll have to record stealthily, or without power, you need a portable recorder, and luckily, you probably already have one: your smartphone. Prepare to take advantage of an off-site location by bringing your tracks with you on an MP3 player (or a band mate’s phone), listening with an earbud to your reference track, and singing into the phone’s mic. Try holding the phone at arm’s length to pick up ambient sound. Then, back at your home studio, fly your phone recording into a mixer and combine it with your backing tracks.

Lots of singers like to sing close harmonies with themselves or record multiple, identical tracks — but what about tracks that are literally the same? Try laying down a single vocal track, then clone the take onto another track (or record on multiple tracks simultaneously) and nudge the twin part 20-100 milliseconds behind the main vocal. You can do this as many times as you want, creating a house-of-mirrors effect with your vocals that gets even crazier if you pan the duplicates to the extremes of the stereo field. Moving the duplicates further from the original can create an echo — or “reverse echo” effect that anticipates the track.

Did you ever watch Twin Peaks? For the scenes in the Black Lodge, characters would deliver their lines phonetically — backwards. For example, the word “music” would be delivered as “Kiss-Yoim.” Then, in post-production, the lines were reversed, so the backward speech was now forward. The results were decidedly creepy in a way that was hard to grasp or explain (they walked and acted “backwards” as well). Among other backward gems in popular recorded music is Prince’s “Darling Nikki” outro, but has anybody ever tried singing backwards and flipping it forward? Digital workstations make these sorts of tricks easy, so harness this perverse power in your next recording!

When it comes to stacking vocals, most producers focus on unisons and harmonies, but you can also experiment with intensity (as Tony Visconti and David Bowie famously did on the track “Heroes”). What different vocal timbres can you achieve by adjusting your delivery? What if you sang the same track at a normal volume, in a scream, then a whisper, then blended all three tracks together?

Of course, you could also add harmony, and depending on which track is out front, the results could be silky or sinister. Try keeping your tracks as rhythmically identical as you can, making sure every note starts and ends in unison, to keep things tidy. With practice, and a little compression, you’ll sound like an angel (or a demon).

Digital reverbs have settings for churches, stadiums, and halls… why are there no settings for smaller spaces, like “coffin,” “outhouse,” or “car trunk?” Why not create small recording spaces? Nail a cardboard box to the wall, open side down, and sing standing inside.

2 thoughts on “Vocal recording advice for the experimental at heart”