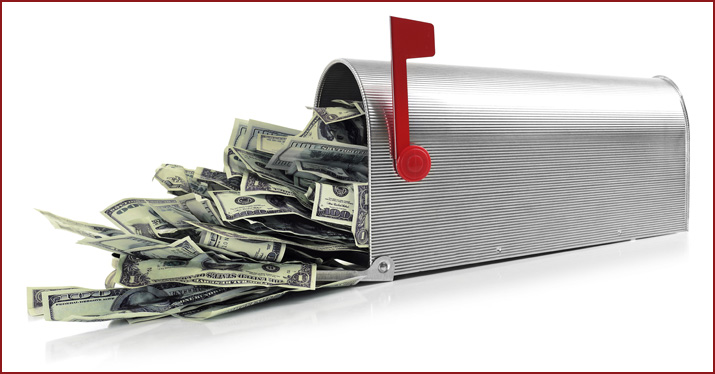 A “pitch” is when a song is presented to an artist in the hopes the artist will record it. When an artist records your song, it is commonly called a “cut.” When you get a cut, it can lead to a wonderful thing called “mailbox money.”

You’re an artist. You love being in front of an audience and doing what you do. You get a rush from leading a crowd into the palm of your hand and watching them sing every word back to you. Putting it all out there during a show and gaining some new hard-core fans by the end of the night can be really satisfying.

And selling CDs and some merchandise sure doesn’t hurt, either.

After all, guitars don’t buy themselves and groceries don’t mysteriously appear in your fridge. You need money to get these things, and money doesn’t always come easily for artists, does it? If you’re a live act, you have to get on a stage somewhere. If you aren’t on a stage, you probably aren’t making any money. But even when you are out there, as high-energy and amazing as your shows might be, you can still only be on one stage at a time. And if you’re not getting significant radio airplay, you’re only making fans one show at a time, one night at a time.

And what if you’re a non-touring artist? If you’re a YouTube, SoundCloud, or Spotify artist, it can be even more difficult to monetize your music. YouTube ads? Sending fans to your Patreon page? There has to be a way to make money outside of just hitting the highway or passing the digital tip jar.

Consider this way to monetize your songs, without selling your own CDs from a stage or a computer screen: get other artists to record your songs.

This begins with someone pitching your song to another artist. A “pitch” is when a song is presented to an artist in the hopes the artist will record it. When an artist records your song, it is commonly called a “cut.” When you get a cut, it can lead to a wonderful thing called “mailbox money.”

We call it mailbox money because royalties literally show up in your mailbox (or email inbox). If your song gets recorded by a major artist, the money can be amazing. But even if one of your songs gets recorded by another indie artist (much more likely, especially at first), it can help keep gas in the van and new strings on your guitar.

Here are some of the major royalties your song can earn when it’s recorded:

This post isn’t a deep-dive into every type of royalty stream. I suggest you use this as a starting point for your own research. The main point here is to make you aware that these revenue streams exist and that they could be working for you.

Over the course of the next few weeks, I’ll dive into how to get your song to an artist, outline additional benefits of writing for others, and detail some pitfalls to avoid. But first, there are reasons why writing songs for other artists might be something you should NOT do.

This strategy isn’t for everybody

This approach won’t work for everybody. For instance, writing songs for other artists is probably NOT a winning strategy for you if you don’t love to write songs. If you only write songs so you aren’t labeled a “cover band,” this is not for you. If you only write songs because it’s time to put out some new product, this is not for you. Getting cuts is not simple, and if you don’t enjoy the songwriting process, you’re going to be miserable. And you probably won’t be very good at it, either.

But if you love songwriting, if you write even when you don’t “have to,” this could be a profitable path for you.

If you are a true songwriter, you probably write more songs than you can release. And maybe not every song you write is for yourself as an artist, anyway. You probably have songs you really feel good about, but they don’t fit your artistic voice or band’s profile. Maybe you’re known for good-time party songs, but now and again you write a tear-in-my-beer heartbreak song. Or you’re a Christian artist who mostly plays churches, but you sometimes write about being a country boy who loves getting mud on his boots. Or you’re in a southern rock band, but you love writing pop songs every now and then. You get the idea.

You know you’re probably not going to put an “off-brand” song on your next album, but you write what you write because you’re a songwriter. It’s what you do. And as a songwriter, you can follow the muse wherever she leads. But as an artist, you usually have to stay “on-brand,” and it can be frustrating to write good songs that never see the light of day. But there is good news: If they are high-quality tunes, your “off-brand” songs don’t have to sit on a shelf. They might actually make you a little bit of money.

And don’t forget the music you’ve already released yourself. Nothing says another artist can’t record those songs too. There are several examples of songs plucked from indie or minor-label albums and turned into hits by a completely different artist.

So today, you have homework. Take out your stack of songs, released and unreleased. Ask yourself: “Could this song be amazing for another artist? Who would that be?” Then tune in next week and catch my next post in this series. We’ll dive into how to get your songs to other artists, so stay tuned.

Related Posts
The first steps to pitching your songs: Mailbox money, Part II
Landing a cut can jump-start your music career: Mailbox money, Part III
Are you writing for an audience of one, or one million? Mailbox Money, Part IV
3 steps to get your songs in music libraries
How to submit your songs to music blogs, record labels, radio, and press
The people who make music, Part I: Musicians, songwriters, and engineers
Marketing music? Where is the traffic coming from?
Want to make more money with music? Here’s How (Part 1).

12 thoughts on “Mailbox money: How cuts can increase your money-making potential”