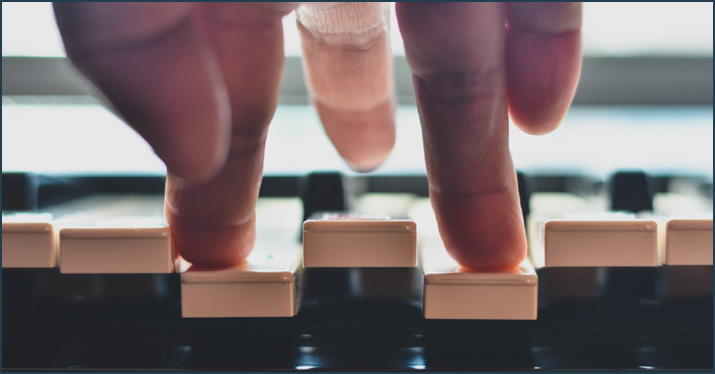 ADSR stands for Attack, Decay, Sustain, and Release, and each one of these four parameters (or “stages”) of the envelope affects how loud your analog synth sound will play over time.

In “Creating and modifying sounds on analog synths“, New York composer, producer, and keyboardist Enrico de Trizio gave advice on getting to know analog synthesizers and how to use these amazing instruments to jumpstart your creativity and music making.

Learning how to navigate the Amplifier ADSR envelope is a key step in getting the sounds you want from many analog synthesizers — and digital ones as well. ADSR stands for Attack, Decay, Sustain, and Release, and each one of those four parameters (or “stages”) of the envelope affects how loud the instrument plays over time, from when you first hit a key to after you release it and the note fades to silence. Here are some details to help you get started.

Turn this knob to adjust how quickly a note you play achieves full volume after you hit a key. A low attack setting means the note plays at full volume very quickly, like someone hitting a snare drum, while a higher attack means you will hear a noticeable crescendo from silence to full volume — more like a chorus or orchestra swelling into its part in a piece. If you’re playing a searing, guitar-like riff, you will likely want a short attack; if you’re looking for ambient clouds of sound to back up an ethereal vocal, a longer attack time can help provide the effect you’re looking for.

Once a sound you’ve activated hits its full volume, it won’t necessarily stay there. Depending on how you’ve programmed your instrument, the sound might drop down to a lesser volume, and the decay setting determines how quickly it does that. Think of this parameter in terms of a horn section, where there might be a loud initial stab of a note, but then the volume fades to a quieter level. If you want ambient synthy atmospherics, a longer decay might give you the texture you’re looking for.

A note will typically stay at a constant volume until you release the key (after the decay parameters have run their course). Sustain indicates the volume at which that note will play as long as you hold the key down. If you want to create a percussive synth bass sound for a propulsive track, for example, you may want a low sustain level, so it’s the rhythmic attack of the note that gets the most attention. If, instead, you want big swells, like a synthetic orchestra, you may want your sustain level to be high so your notes can sing in full glory for as long as you hold the key(s) down.

After you let go of the key or keys you’re playing, the notes can cut to silence nearly instantly — or take a while to slowly fade into nothing. The release parameter lets you control this. If you’re playing a rapid-fire, percussive line, you may want to keep your release low so your playing doesn’t get mushy and hard to decipher. On the other hand, more textural approaches for something smooth or ambient can benefit from a longer release that allows your notes to gradually fade after you release them.

As you’re experimenting with ADSR settings with your own synths, de Trizio recommends remembering how each individual parameter affects the sound you’re creating. “Attack, decay, and delease behave in the time domain, meaning they affect how quickly or slowly things happen to the sound, while sustain acts in the domain of amplitude, meaning it doesn’t affect timing, it affects the level — or volume — of the note you’re playing. This distinction is important, and it’s what most people have a hard time with.”

As per de Trizio’s advice in the previous article, the best way to learn these parameters — and nearly everything else about analog synths — is to sit down with one, twist some knobs, play some notes, and see what happens. There’s nothing like experimentation to help you learn how to dial in sounds, discover new sonic possibilities, and take your music in unexpected directions.

ADSR Envelopes: How to Build The Perfect Sound [Infographic] (LANDR)
What is an envelope? (Image Line)

2 thoughts on “The Amplifier ADSR Envelope: How to manipulate analog synth parameters”