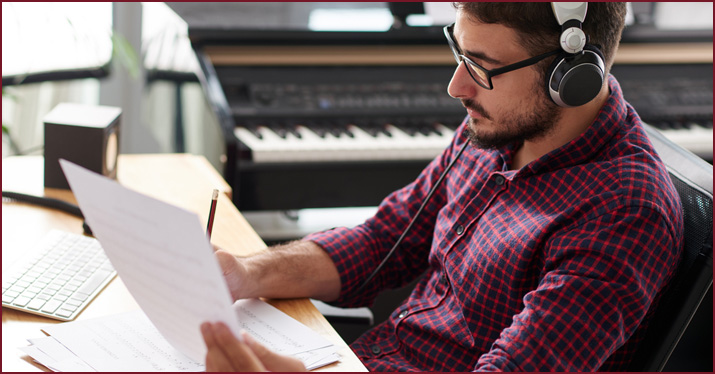 To write a great melody, throw in a dramatic flourish to enhance a moment, but sing the way people speak: It sounds better and makes a melody more memorable.

In part one of this series, we looked at ingredients that go into a great melody – including motives, rhythmic variation, and tonic and dominant notes – using “Over the Rainbow” as our model. Now we’ll offer some tips on how to build on that knowledge so you can write a great melody of your own.

But first, there’s one more important element of this song we need to cover, because this is going to be our starting point for writing.

Prosody is the matching of words to music in a way that sounds natural.

“Over the Rainbow” features nice examples of prosody, but also examples that are more theatrical than natural. The words “over the rainbow” are an example of good prosody. The melody fits in perfectly with the way people actually speak the phrase. For example, notice how when you say the word “over” your voice drops down on the syllable “ver,” just like the melody does.

On the other hand, the opening word, “somewhere,” is sung in a very unnatural manner, going up an octave. People don’t speak that way, unless they’re on stage, but it works in this situation because the emotion the songwriter is going for is wistful, and because “somewhere” is a word you can use in that manner. You couldn’t, for example, swap out “somewhere” for “salmon.” That wouldn’t work nearly as well. (You could swap salmon for rainbow: “Somewhere over the salmon.” Just sayin’.)

Good melodies mirror speech. It’s OK to throw in the occasional dramatic flourish to enhance a powerful emotional moment, but for the most part you want to sing the way people speak. It will sound better and make your lyrics and melodies more memorable.

Consider “Closing Time” by Semisonic, which has a very catchy melody, but which features both good and also terrible prosody.

The opening line “Closing time,” is a great melodic hook, and the words are matched perfectly in what is a nice example of a more theatrical way of singing. (After all, bartenders don’t tend to linger on that phrase in real life, but it works in the song, because it nails the emotions of the moment.) You hear it once and it’s in your head for life.

But the opening pair of lines after that are, prosodically speaking, terrible.

“Open all the doors and let you out into the world”

It’s hard to scan that line and hear the melody. When you listen to the song, note how the singer has to awkwardly pause on the word “and” and how terrible “let you out into the world” feels.

The second line is no better.

Not only is the phrase just plain weird, but he even sings the word “every” differently in “every boy and every girl.” People don’t speak like that, nor do we derive any interesting dramatic effect from this delivery. It’s just plain bad.

But! They get it right with the next pair of lines:

“One last call for alcohol so finish your whiskey or beer” and “You don’t have to go home but you can’t stay here.”

It’s no mystery why those are the most memorable lines in the song. The melody and lyrics match perfectly.

The chorus, too, is a nice example of dramatic prosody. People don’t speak the words “I know who I want to take me home” the way the singer sings them, but it’s not awkward. It feels right, and it enhances the emotional impact of the song. This melody also features some of the other traits we covered in the first article: a nice mix of steps and leaps, rhythmic variation, etc. Interestingly, the leap from “I” to “know” is an octave, just like in “Over the Rainbow,” and, like that song, the next note is a half-step down.

You can also use the concept of prosody to reverse engineer a melody. Rather than trying to fit lyrics to a melody, try writing a melody around your lyrics. If that doesn’t work, try writing your melodies around people’s speech.

English is a very musical language. It’s hard to pick up on it when you’re in a conversation, or when you’re listening to people speak, because we tend to focus on the words and not the melodies. But if you can turn on your TV and walk into the next room where you can hear the voices but not the words, you’ll pick up on it. Scott Johnson did a great song called “John Somebody” that took this notion literally.

John Lennon frequently mentioned how he would write songs based on words Ringo would say in conversation, like “it’s been a hard day’s night.” Not only is that a funny turn of phrase, it’s also rhythmically interesting.

Here are some of the most famous opening lines in history. Read them aloud. Feel the rhythms. You can see how the songwriters used them to create melodies.

“Hello darkness, my old friend”
“On a dark desert highway”
“Once upon a time you dressed so fine”
“It’s a godawful small affair”
“In the day we sweat it out on the streets of a runaway American dream”
“When I find myself in times of trouble”
“Please allow me to introduce myself”

My guess is Dan Wilson wrote “Closing Time” after hearing a bartender say “one last call for alcohol,” which has a great rhythm.

You can do the same thing. While it can be hard to listen to the music in speech when you’re in a conversation, try sitting in a café or bar and eavesdrop. If that makes you uncomfortable, there’s always TV. Actors tend to speak with more emphasis than everyday people do, and they also use a wider range of notes as they talk. Speeches are good, too. Listen to great orators, like politicians and preachers, and mine their speeches for music. Hip hop can also provide great ideas for melodies. Take a rhythm from a rap lyric and add notes to it to see how it works. (You’ll want to change the lyrics, of course.)

If you’re still having trouble coming up with a melody or motive, try working with a chord progression and playing the notes in the chords. (For example, the opening notes of “The Star-Spangled Banner” are a C major chord.) Linger on some notes, maybe holding them over after the chord has changed to see if that sparks any ideas. Try starting on a note that’s not in the chord (like a D over a C major) and having that resolve to a note in the chord. Start singing on the seventh (a Bb in C major) and see where that takes you.

As I mentioned in the first article, most melodies are made up of motives, so you don’t need a long string of notes. Four notes can be enough to get you started, then take that motive and play with it. Transpose it up and down the scale. Invert it. For more lyrical music, you may want to include a flurry of steps leading from one transposition of your motive to the next one, a la “Yesterday.” For rock, funk, hip hop, etc., you might just keep that one motive and only vary the last note (e.g. Imagine Dragons’ “Thunder”). But even in those genres, you want some variation to keep your songs interesting.

“Get Lucky” by Daft Punk is a great example of this. Amazingly, this is a four-chord song and the progression never changes. But they manage to keep things interesting by using three different motives. The verse motive is very static, with short bursts of eighth and sixteenth notes, with only the last note changing. (Note the nice prosody with the lyrics, “Like the legend of the phoenix.”) The pre-chorus (“We’ve come too far…”) is much more soaring with half notes and a constantly transposing motive. And the chorus is choppy and fairly non-melodic, featuring mostly one note. (As much as I love the prosody of “We’re up all night to get lucky,” “get some” in “I’m up all night to get some,” always feels off.)

Maybe you’ve got a motive you like, but it’s not quite fitting into your song. Try varying where it fits in the beat. Last time we looked at the Raiders of the Lost Ark theme by John Williams. Here it is again:

He doesn’t begin playing the melody on beat number one. It’s the third note of his motive that is played on the downbeat, giving the music a galloping feel.

Or take Owl City’s “Fireflies,” which starts just after the first beat, giving the motive a nice syncopation that just sticks in your head.

One last thing to keep in mind: melodies don’t have to be melodic to be catchy. Remember, melodies are mostly about rhythm. We saw this in action for the chorus of “Get Lucky.” The chorus of the Beatles’ “All You Need is Love” features one note sung over different chords even when those chords don’t feature the sung note (in this case, they are singing a D note on the words “need is” over an A major chord). But it works because the rhythm and the phrase are so catchy.

7 thoughts on “How to write a great melody, Part 2: Putting the rules to work”