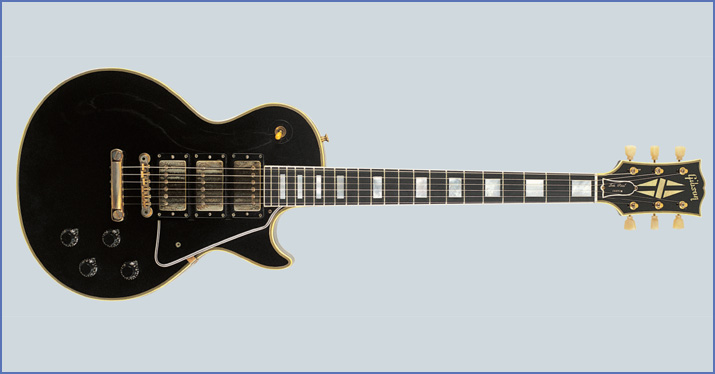 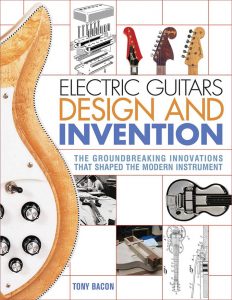 At Gibson, 1958 turned out to be a remarkable year. The company made commercial inroads with electric guitars in the ’30s, developed its hollowbody lines into the ’40s, and reacted to Fender’s new solidbody by introducing the Les Paul Goldtop, launched in 1952. Some of its new models for ’58, however, were like nothing that had gone before. By 1955, the Goldtop had two P-90 pickups and Gibson’s new Tune-o-matic bridge and separate tailpiece. In 1957, Gibson developed some new pickups, designed by Seth Lover, a radio and electronics expert who worked for Gibson in the ’40s and early ’50s in between jobs for the US Navy. He joined permanently in 1952. In the electronics department, run by Walt Fuller, the industrious Lover first developed the Alnico pickup, the one on the original Les Paul Custom. Soon he set to work on a more important design.

Lover was asked to find a way to cut down the hum and electrical interference that plagued regular single-coil pickups, including the P-90 that Fuller had designed. Lover knew about the humbucking choke coil of some Gibson amplifiers, installed to eliminate any hum caused by the power transformers. “I thought that if we can make humbucking chokes,” Lover recalled later, “then why can’t we make humbucking pickups?” No reason at all, he concluded, and started to design prototypes.

Gibson’s publicity blurb said that the new humbucking pickups – the name comes from the way they buck or cut the hum – “eliminate interferences from neon lights and outside disturbances, reduce annoying feedback, and greatly improve clarity of tone.” Lover wired together two coils, with opposite magnetic polarity, connected in reverse so the current went clockwise around one coil and counter-clockwise around the other. The coils were out of phase, the magnets were out of phase, and the resulting pickup was in-phase, but the sixty-cycle hum was out of phase and cancelled. Starting in the early months of 1957, Gibson began to put the new humbuckers in the place of P-90s on many of its models, including the Les Paul Goldtop and Custom, with the Custom promoted from two P-90s to three humbuckers. 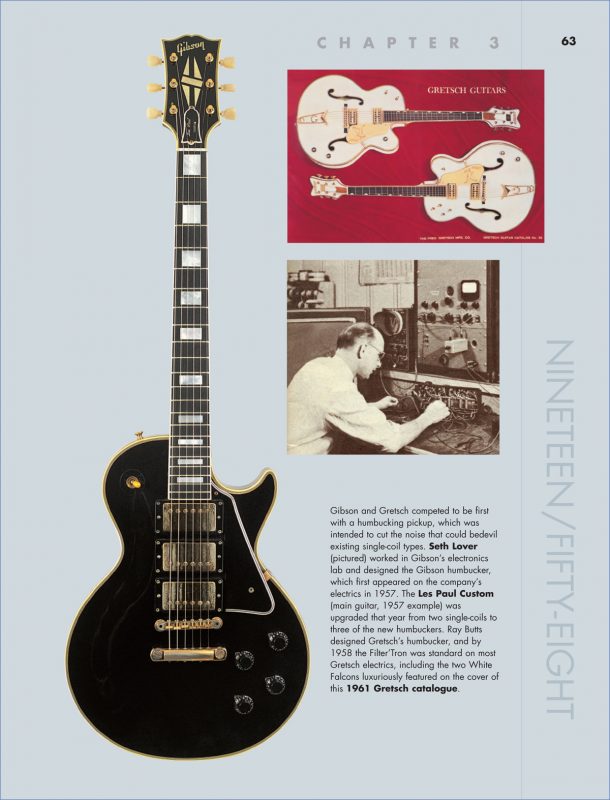 Lover was not the first to design a humbucking pickup, as he discovered in 1955 when he applied for a patent, assigned to Gibson. The patent attorneys made reference to no fewer than six previous efforts. The earliest, dating from 1935, was Armand F. Knoblaugh’s patent for Baldwin, apparently made with an electric piano in mind but offered as appropriate to other steel-string instruments. “I had a hell of a time getting a patent,” Lover remembered, “and I finally got one with more or less one claim: that I’d built a humbucking pickup.” Ray Butts came up with a similar principle around the same time while working with Gretsch, for whom he designed the Filter’Tron humbucking pickup.

Butts was an electronics expert who owned a music-store in Cairo, Illinois, and in 1954 he travelled to Nashville, hoping to meet the city’s guitarists and interest them in his combo amplifier, which offered the unusual facility at the time of echo from a built-in tape loop. One of the musicians he met there was Chet Atkins, who talked to Butts about his quest for an improved guitar pickup. Atkins didn’t like the single-coil DynaSonic pickups on his signature Gretsch model, the 6120. “So he said to me, why don’t you make me a pickup?” Butts recalled. “I had done some experimenting with pickups before, so I said OK. My idea from the beginning was to build a humbucking pickup. I knew about the concept from working with transformers, and Ampex used the humbucking principle in the pickups of their tape-recorder heads. It wasn’t a new idea, and it’s a very simple principle.”

Atkins arranged for Butts to meet with Jimmie Webster at Gretsch, and an agreement was made for Butts to design a new pickup. Butts applied for his patent in 1957, and it was granted two years later. Gretsch probably debuted the pickup publicly at the summer ’57 NAMM show in Chicago, where Gibson, too, probably showed off Lover’s humbucker to the instrument trade for the first time. In typically grand style, Gretsch called its new pickup the Filter’Tron Electronic Guitar Head. By 1958, Gretsch was advertising Filter’Trons as standard on virtually all its electrics, proudly claiming they “eliminate absolutely all electronic hum – you get pure guitar sound.”

Meanwhile, the most unexpected additions to Gibson’s lines in 1958 were the Explorer and Flying V. As usual, the company had its ear to the ground for trends among other makers – and over on the West Coast, those mavericks at Fender were at it again, this time with their sleek new solidbody, the Stratocaster. When it appeared in 1954, Gibson seemed stuck in a Midwest frame of mind and in danger of falling behind the times. The Stratocaster defiantly moved away from the classic symmetrical guitar-body template, throwing the shape forward with offset waist and cutaways. The overall effect of Fender’s new design was of a guitar where all the elements worked together. It looked excitingly modern and it had a space-age name. Gibson had to compete. “Leo Fender was always downgrading us, which is why I was so fond of him,” Gibson boss Ted McCarty recalled with a touch of irony. “He was going around the country saying that Gibson was a stodgy old company, that we’d never had a new idea in our lives, that we were still making things like we did fifty years ago. He was saying that our line was all stodgy things and his was the bright new deal.”

McCarty decided to play Fender at its own modern-design game. Soon, probably in the spring of 1957, his team came up with a plan for three potential new models, given the group name Modernistic and intended to dispose of Gibson’s fusty old conventional guitar shapes by introducing some shockingly of-the-moment designs. “We were getting ready to think about the summer trade show,” McCarty said, “and we were thinking, what can we come up with that’s new or different? I said, you know what? Let’s make some guitars that are so outlandish, they’ll cause a stir at the show. We’ll prove to Leo that we can make something different.” The three proposed models would become known as the Flying V, the Explorer, and the Moderne.

Gibson’s development team was much the same as it had been for the Les Paul, consisting of a number of people from different parts of the company, notably Larry Allers, who was promoted to head the woodworking department following the success of the Les Paul Goldtop, and Seth Lover, from the electronics lab. Gibson researcher and author Gil Hembree said: “Larry Allers was in charge of the whitewood shop, the pattern-makers, and the machine shop. He was the one who would have organized the work on the Modernistic guitars in ’57 and ’58, selecting one of the pattern-makers and giving them the assignment. It’s certainly possible that he might have tweaked some of this prototype work on them, because he had fine skills. Not only did Larry supervise, explain, and coordinate, but also he would have done some of the most difficult hand work on the designs.”

Seth Lover at Gibson said later that he was significantly involved in the Modernistic guitars. During a ’90s interview, Lover pointed out a Flying V in an old Gibson catalog. “That’s a body style I designed for them when I was at Gibson,” he said proudly. “The idea behind that was to get some new shapes, and I designed this. I sketched out a number of shapes and styles that I thought would be different for guitars, rather than going back to older designs.”

An outward sign of the search for fresh approaches came in June 1957, when Gibson filed three patent applications for new guitar designs. It was unusual for Gibson to apply for this simple type of ornamental-design patent: most often, the company applied for utility patents, which had detailed mechanical plans and full descriptions of the finished item. For example, the utility patent for the Tune-o-matic bridge, granted in April 1956, had a page of meticulous drawings with thirty-five keyed parts and then thousands of words of descriptions and claims. What prompted Gibson’s sudden interest in design patents? It seems that with these three stark Modernistic documents, Gibson was again sizing up to Leo Fender. Fender had claimed simple design patents for the Telecaster and the Precision Bass, granted in 1951 and 1952 respectively. McCarty said he patented the new Gibson designs because he “knew what Leo would do.” Presumably he meant that something like a Fender Flying V-type model might follow. “If I had a patent, however, he wouldn’t dare,” McCarty said. “I never bothered with patenting a lot of the other models, because it costs money to patent a guitar shape.”

Excerpt and images published with permission of the publisher.

Special offer for Disc Makers Blog readers: Get $5 OFF Electric Guitars: Design and Invention! Go to Backwingstore.com and use the promo code DISCMAKERS at checkout.

Tony Bacon writes about musical instruments, musicians, and music. He is a co-founder of Backbeat UK and Jawbone Press and lives in Bristol, England.