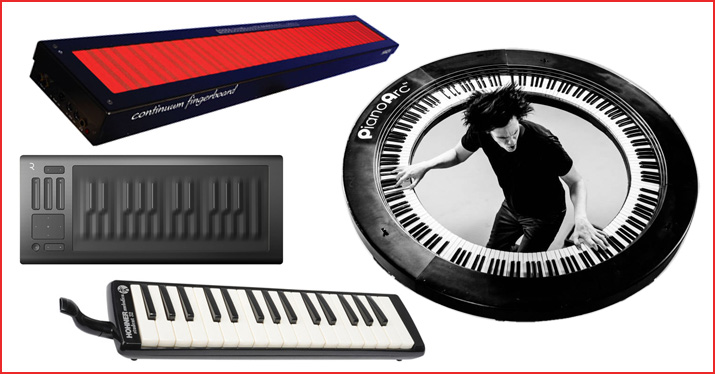 When the word “keyboard” is mentioned, you might think of a grand piano or Hammond organ, old-school analog synth or cutting-edge Korg digital workstation. But the possibilities for keyboard instruments go far beyond.

If you enjoy using the standard keyboard format as an interface to making music, check out the following unconventional keyboard-flavored instruments. Ranging from highly affordable to boutique and custom-crafted, highly portable to requiring a dedicated road crew, they each have the potential to inspire and push your music making in new directions.

The melodica is a wind-powered, portable keyboard instrument that can sound like an accordion, oboe, and/or harmonica, depending on the type you’re using and how you play it. When you blow into the instrument, internal reeds vibrate, creating the melodica’s signature sound.

Hohner is the best known maker of melodicas, and their versions range from student versions to their new AirBoard model. Hammond, the maker of classic tonewheel organs, makes a professional-oriented melodica called the Melodian. The list of melodica types, from entry level to boutique and professional, goes on; there’s even been experimentation with using 3D printing to make custom melodicas.

If you’re looking for a portable, affordable, and versatile way to add different colors to your music — whether you want a cutting lead instrument or some warm and evocative textures to play underneath vocals, a melodica could be the answer.

To see the instrument in action, check out this amazing rendition of Gershwin’s “Rhapsody In Blue” played on solo melodica. 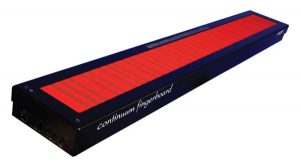 Looking for a “fretless keyboard” where you slide, bend, and lean into notes at will, just like a guitarist? The Continuum could be the answer you’re looking for.

Though it may not look like a traditional black-and-white keyboard, the Continuum follows the same overall layout as a piano — it just lets you slide between notes up and down the entire instrument, create custom vibrato just by wiggling your fingers, change certain characteristics of the sound by pushing your fingers closer or farther away from you, and further tweak your sound in real time by leaning harder or more softly into the instrument. When you play the Continuum, you can trigger sounds that are included internally, or use the instrument to play external digital instruments via a MIDI connection.

The Continuum is far from cheap, but in the right hands, it can be a compelling instrument with some amazing playing possibilities for a huge variety of musical genres. Watch globally renowned composer A.R. Rahman play the instrument here.

Roli describes the Seabord as “a radically new musical instrument that reimagines the piano keyboard as a soft, continuous surface and puts expression back at your fingertips.” Similar to the Continuum, you can bend and slide between notes and affect your sound in real time by applying more or less pressure to the instrument’s surface – adding a guitarist’s level of expressiveness and tonal variation to your keyboard playing.

When it comes to sounds, the Seabord comes with Equator, a built-in sound engine that features tones custom built to take advantage of the instrument’s capabilities. If you want to go deep into editing and customizing sounds, you can plug the Seabord into your computer and adjust patches in detail from there.

Smaller Seabords can cost in the high hundreds of dollars, while larger ones are in the low thousands. To see the instrument in full rock-and-roll action, check out this dirty prog jam, featuring Dream Theater keyboardist Jordan Rudess, from the 2016 NAMM show. 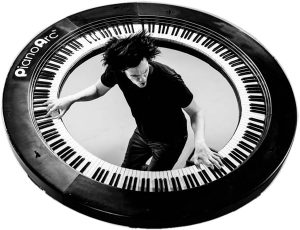 The PianoArc is a 360-degree circular wrap-around keyboard, where the keyboardist stands in the center and can use his or her hands to hit any of the keys in any position. The instrument was created in collaboration with Brockett Parsons, keyboardist for Lady Gaga, and was used on the Born This Way tour in 2012-2013 and the ArtPop tours of 2013-2014. More recently, Parsons could be seen playing a PianoArc with Lady Gaga during the Super Bowl halftime show.

One of the key benefits of the PianoArc is that it looks powerful, different, and cool, and provides keyboardists with an opportunity to give a highly dynamic performance rather than feeling like they’re stuck hiding behind a large, sedentary slab of furniture. Just watch Parsons jam on the instrument to get a real sense of this. Two keyboardists can even stand inside the same PianoArc and wail at the same time (I had the privilege of doing this with Parsons at a NAMM show a couple years ago, so I can testify to how much fun it is).

When it comes to sounds and performance, the circular keyboard can be split into multiple different zones, each with keys triggering a different sound. With so many keys at your disposal (288 for the full version of the PianoArc, to be exact), it’s easy to have every sound you’ll need for a given song ready and waiting for you on a different chunk of the keyboard – all you have to do is swing around to the right portion of the instrument and start playing.

Keep in mind that the PianoArc does not contain any sounds by itself; it serves as a MIDI/USB controller that can trigger external sounds that you’ve programmed on a hardware or software synthesizer. On the Lady Gaga tour, for example, Parsons used Apple’s Mainstage program as the source of sounds that he would trigger from inside the PianoArc.

PianoArc says that the price of a custom-built new instrument is comparable to that of a nice acoustic grand piano, so for many indie artists, this is an instrument to aspire to; the company provides PianoArcs for temporary rental as well. To see Parsons wail on the PianoArc, check out this video.

Do you have a favorite unconventional keyboard instruments? Tell us in the comments below.

Related Posts
Six tips for adding Hammond organ to your music
The B-3 in action: Five examples of Hammond organ done right
Managing latency with your keyboard to lock in your parts
Seven tips for recording great keyboard parts in the studio
Virtual synths and musical instruments on your mobile device