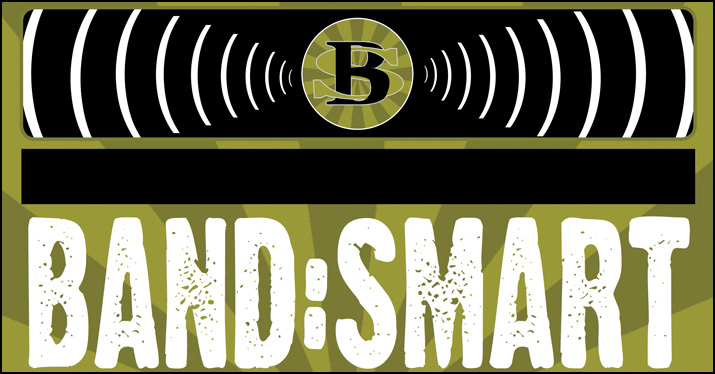 People train for everything: marathons, driving tests, hotdog-eating competitions… Why on earth wouldn’t you train for something as huge, as dangerous, as awe inspiring, as being able to succeed in the music business?

This post is excerpted and adapted from Martin Atkins’ book, Band:Smart, Succeed In The Music Business On Your Own Terms. Atkins’ book is exclusively available for free from Disc Makers, but only for a limited time. Get your free copy today!

I thought that success was a house with a pool in LA flanked with palm trees. It really confused me when we had a worldwide hit single and I didn’t feel very good. It took a while to realize I just wasn’t happy. At that point it’s tough to get advice from anyone… you have to trust whatever internal barometer you have.

It’s like: a symphony between the music, the marketing, the imagination, the stage show, the ability of the band to promote themselves/make friends/be nice, the popularity of their chosen genre and the availability of transportation. It’s teamwork except you, the person reading this, you are all of the team members and there’s no high in team.

I’m not saying “don’t have ambition” — you HAVE to have it. But if your head is always looking up into the clouds, then you’ll miss the NEXT step — which is just a little bit higher than the place you are standing right now.

I DON’T KNOW how you can put 20,000 people in a stadium, but I know that if there were two people sitting on a fictitious couch in the corner of the room right now and you were to make friends with them – or at least make contact – have a conversation, exchange your music, a CD, a shirt, a download card whatever for an email address, then all you need to do is THIS VERY THING 9,999 more times and you have your 20,000 people!

This would also fall into the motivational poster category of “It’s not the destination, it’s the free tickets to see Journey.”

Of course, this means that, packed in your new shiny diversified skill set, “people skills” needs to be in there – don’t fool yourself – people aren’t born with these skills, but the more you practice, the better you will become at anything. I’m VERY shy and look at me – sitting alone in a basement typing!

If you’ve seen my lectures you’ll know that this is the point where I play my home movies of the Great Wall of China – a terrific metaphor for success – on the one hand you can stand off to a distance, hands on hips shaking your head, wondering how on earth they created this amazing seventh wonder of the world. OR you can realize that it’s just a pile of bricks.

Start your own pile of bricks.

After six or seven months, you’ll have a bit of a wall going on and people will stop and ask “What are you doing?” and you can answer with pride! “I’m building the Great Wall of China #2: The squeekquel!”

They’ll say, “This is ridiculous,” “You are an idiot,” and “I preferred you when you were drinking.” And then they’ll ask, “How can I help?” Because people will help with wild crazy crusades that no sane individual would undertake. When everything makes perfect sense, then all you have is a business plan… and who cares about that?

One of the largest obstacles to your success might be you!

How tragic is it, with all of the obstacles to overcome (finances, shyness, geography, technical stuff, workload stuff) that one of the largest obstacles to your success might be YOU? I have seen this so many times it’s not funny anymore – I have also been this person many times. I could hide behind the fact that I’m shy and sometimes I know that people take the manifestations of shyness as an aloofness – which sucks! BUT, be careful that your insecurities don’t manifest themselves as some kind of raucous jerk type behavior because you think that’s how rockstars act. The real stars are NICE to people, they connect with their fans – that’s all that’s left, really. The essence of all of this, the connection with you, the music, the lyrics, whatever, you can either help it along – or destroy it.

You have to create a FACE TIME CONTINUUM!

Unfortunately, any opportunities (to fail or shine) will be accompanied and multiplied by the X-factor, karma, and Murphy’s law.

According to Nan Warshaw (co-founder of Bloodshot Records), “It will be 97% grind and 3% glamour.”

I hope this all helps. So far, from a scientific standpoint, it looks like it boils down to this: Don’t start a band whatever you do. If you won’t listen to me and you do start a band, then DO NOT get in a van, a bus, or god forbid a PLANE. Don’t do drugs, a sandwich, or anyone else’s girlfriend. Make sure you hire a lawyer (or two!) before you begin playing any instrument. Don’t leave the country. Don’t write any songs and don’t come up with a band name, an album cover, or t-shirt design.

Remember, for a long time, it looked like Ginger Spice leaving the Spice Girls was the end. But, now they are reunited and better than ever… just remember THAT when everything seems hopeless!

Don’t be in a hurry. So many people are aiming for something huge like, “I want this album to be #1!” People think in very grandiose, massively successful terms, but really, sometimes all you need in any business is just the ability to get through to next week and the week after and to do it again and to do another show and to record another song and if you can keep doing that, you keep getting incrementally better and you’ll eventually get to where you can be: learning, growing along the way.

Train for success. People train for everything! Marathons, driving tests, hotdog-eating competitions! Why on earth wouldn’t you train for something as huge, as dangerous, as awe inspiring, and as potentially rewarding as this? Anything, except perhaps the economy, can be fixed.

Martin Atkins is a drummer who has done it all – he helped shape the post-punk industrial sound, expanded the brands of Public Image Ltd and Pigface, and his personal moniker is renowned all over the world. Simply put, the dude knows his stuff. And now you can learn everything he has with a free copy of his latest book. Band:Smart, Succeed In The Music Business On Your Own Terms is over 600 pages of music know-how on just about everything an indie musician needs to learn. Get your FREE copy today, exclusively from Disc Makers.

BONUS: Here’s a playlist of some of Martin Atkins’ best lectures found on YouTube!

4 thoughts on “Train to succeed in the music business”