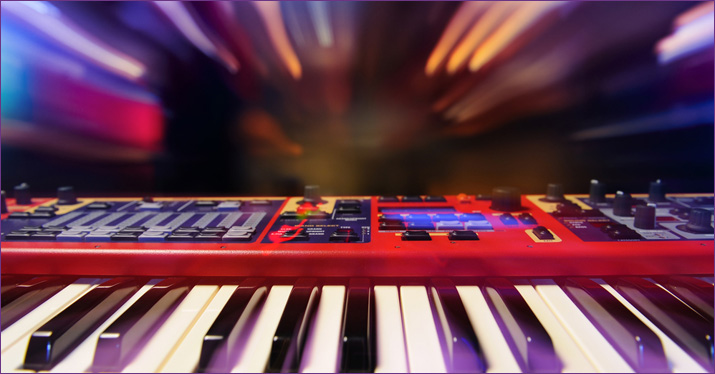 When playing keyboards, latency can refer to the delay between hitting a key and hearing the resulting sound. Just a little delay can derail your part.

Recently, I played in a recording session where the goal was to track live, full-band instrumentals for five tracks in six hours. The first four songs went down as smoothly as we could have asked for, but the sixth tune gave me some unexpected trouble — for the first couple run-throughs, I couldn’t seem to get my piano parts to lock in with the groove of the overall track. I knew the song well and had performed it live dozens of times with my bandmates. Here in the recording studio, I wasn’t sure what the issue was.

After some reflection and listening back to our first couple takes, the hang-up became clear: latency.

In the context of playing keyboards, latency can refer to the delay between when you hit a key and when you hear the resulting sound. In many situations, this delay is minuscule and not noticeable, but in some situations, like the one I describe here, it’s something that has to be actively managed if you want to get your best playing on record.

Here are a few tips to help you keep latency issues from getting in the way of recording your own great keyboard parts.

The delay between when you hit a key on a vintage clavinet and when you hear the resulting sound will be less than the delay on a nine-foot concert grand piano. This is simply due to the designs of the instruments and the amount of machinery that needs to move in order to make a sound. The distances those pieces of machinery need to travel are significantly less on the clav, so the sounds are produced more quickly when you play it.

Now, that difference may only be a matter of milliseconds, but when you’re recording exposed keyboard parts on a hard-grooving track, those milliseconds can make the difference between a tight rhythm section and one that sounds sloppy.

The moral here? Spend some time getting to know whatever keyboard instrument you’re recording before you start tracking — whether it’s a brand new synth, honky tonk piano, or Hammond organ — and keep latency specifically in mind. If the instrument displays short latency, perhaps it makes more sense for you to play right on the beat, or even a bit behind, in order to make your parts really lock in. If your instrument has longer latency, you may want to be on top of the beat, playing your notes just a bit earlier than you normally would to account for the added delay.

Regardless of how you approach it, the proof is in the playback. If your parts are locked in when you listen back to your takes, you’re doing something right.

In my recording session, the big latency difference with the troublesome last track happened because, for that song only, I was using a software instrument. In other words, I was playing a MIDI keyboard that triggered samples that were housed on the studio’s main computer. This setup created more latency than my muscles were expecting, given my experiences tracking the other tunes of the day. But once I became aware of it, I was able to adjust my playing and record my part in a way I was quite happy with.

If you’re working with software instruments yourself in the studio, be aware that such setups can have the potential to create latency issues like the one I experienced. If you encounter such a scenario, talk to your recording engineer and ask if there’s anything on his or her end that can be done with the computer or software to minimize latency. Or, if you can just adjust your playing like I did — and play a little more in front of the beat to compensate for the delay — all the better.

If latency issues make it so that every single one of your synth horn stabs on your song’s big chorus show up just a hair too late, try selecting your entire recorded part in Pro Tools, or whichever recording program you’re using, and shifting it just a few frames earlier. A few mouse clicks might be all it takes to have your part sound exactly as you meant it to sound, unwanted delays aside.

Read more
What is Latency? How to defeat it (TweakHeadz Lab)
How to Manage & Minimize Latency in Your Audio Projects (Envato Tuts+)

Related Posts
Seven tips for recording great keyboard parts in the studio
Virtual synths and musical instruments on your mobile device
Using a MIDI Controller In Your Home Studio
Six tips for adding Hammond organ to your music
The B-3 in action: Five examples of Hammond organ done right