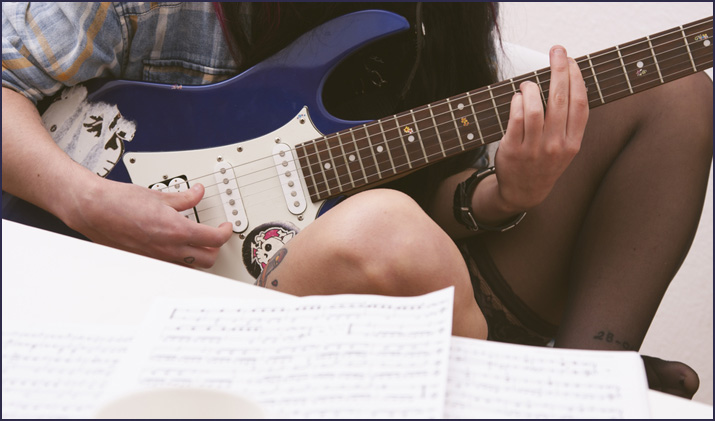 If your music practice routine has plateaued, it’s time to challenge yourself and try something new. We’ve got tips to get you out of your creative rut.

It’s something musicians face all the time: the dreaded plateau. We all know what it’s like: you’re on a roll, regularly practicing, making some awesome progress, taking great strides in what you can produce creatively, and then all of a sudden… you stop improving. Every music practice session finds you playing the same old stuff. It becomes repetitive, mindless, and definitely not useful.

A lot of times we chalk it up to writer or creativity block and sit around and wait for inspiration to strike. But who has time for that? As it turns out, there are some great ways to get out of these creative ruts, and it all boils down to challenging yourself and trying something new.

Identify and name what you are playing

Before you can change anything you need to figure out what you’re doing, and I mean actually name what you’re playing. Are you using a certain scale over and over? Or a particular set of chords? Is there a rhythm or groove you always find yourself falling back on? Can you name these scales, chords, or rhythms? This takes discipline because it requires stopping, thinking, and doing some honest reflection. You might be surprised to see just how monotonous your music practice has become.

If you are self-taught or play by ear, you may need to look up some concepts or find an instructor if you don’t know how to name what you are doing. In the beginning, if you don’t know where to turn, online lessons or videos with a qualified teacher can help steer you in the right direction.

Stop playing what you identified

Once you know what you are doing, it’s time to break the pattern! This can be the hardest part. We all get that sense of immediate gratification from playing something we know inside and out, but remember, the goal here is to grow and the tried and true isn’t helping you right now.

The most efficient approach is to designate a small amount of music practice time each day to just play new things. Maybe it’s a new song, a new scale, a new couple of chords, or a new concept or technique. Gradually increase the time you spend on new material until you’re comfortable and excited about exploring new ideas. This is the purpose of practice, after all: to learn something you don’t already know.

As you develop this approach, make sure you always have something new to focus on during your practice sessions. It can be a technique, a music theory concept, a performance approach – anything. Just make sure you are regularly finding these concepts and working on applying them.

Break things down and rebuild

One of the easiest ways to break out of habits is to just change your approach, or how you go about playing or writing. This simple shift can be enough to open the flood gates and get fresh ideas flowing out.

When you sit down to write or practice, perhaps you always find yourself falling back on the same predictable chord progressions. Instead of thinking in terms of chords names and chord shapes (where it’s really easy to fall back into that I-IV-V or I-vi-ii-V), try going to the lowest common denominator and stack intervals you like to hear what sounds they produce.

In music theory, an interval is the distance between two notes. Chords are built by stacking thirds, so a C Major chord would be built from C, E, and G.

But what happens if you stack something other than thirds? What if you stacked fifths? Or what if you harmonized riffs instead? What kind of harmonies would those lines produce? Experiment, and if you come across something you like, write it out and try to figure out what chord you were playing.

As another example, you could challenge yourself to create a very simple motif and build an entire song around it.

A motif is a short musical phrase. It can be a melody or a rhythm but it’s always short and simple. Think of a motif as a single musical idea – like a short sentence, or even just a word.

With this approach, you’re forced to create interesting variations on that motif to keep things from getting boring. Maybe you drag out the rhythm, accent different notes, or add embellishments. Just jam on it and see what you come up with.

When you’re stuck in a creative rut or a plateau, chances are it’s because you’re not challenging yourself creatively. A really great exercise to get you on the upward trend again is to give yourself little challenges throughout your personal music practice, rehearsal, or writing sessions.

Maybe it’s as simple as using a scale you’re not comfortable with. If you’re tired of just major and minor, try experimenting with modes to add a little variety.

Try using a mode instead of the major scale to see what kind of sound it gives. So if you were playing in F Major, try swapping out the melody for F Lydian for a few measures and see how it sounds.

Another option is to change modes as you follow along your chord progression. This allows you to pick out notes that are best suited for the chord being played and can really help you create stronger melodies. So if you were jamming on a I-IV-V progression in C Major, you would play the C Major scale over the I chord, the F Lydian scale over the IV chord, and the G Mixolydian scale over the V chord.

As a final step, remember to slow down and be patient with yourself. Explore things fully and deeply and don’t let yourself blow by concepts at surface level. If you rush past new ideas too quickly they won’t really sink in and become second nature. It will be challenging, but you’ll find yourself growing more as a musician and a creative if you put in the time to really “get it.”

That’s it! Name what you are doing, stop doing it, and find something new to learn. Break things down, challenge yourself, slow down, and be patient. Like any other creative work, music is always more about the process and the journey rather than the destination. Many would argue that with creativity and music there never really is a “destination” – it’s a constant horizon for the next great idea. There’s always something to learn and something new to excite your creativity.

Now get to it and have fun!

Related Posts
Six ways to promote your music
Music promotion tips from Dave Kusek
Four ways to find new sounds and energize your music
Getting out of a creative rut
Songwriting and a quick lesson in music theory
Want music success? You’ve got to love the grind.

10 thoughts on “Challenge yourself when music practice gets stale”