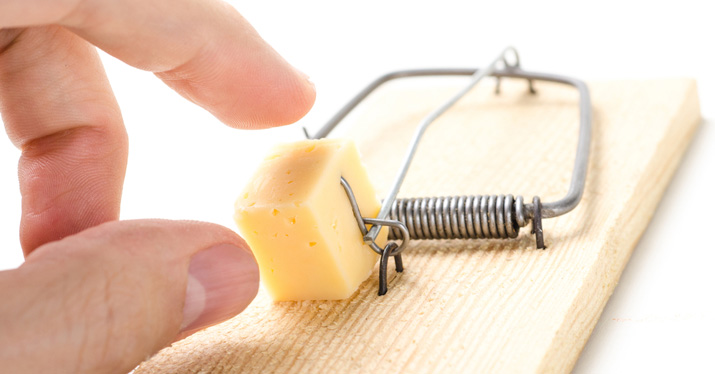 Successful risk-taking always involves rethinking the possible. The four-minute mile was impossible until Roger Bannister broke it; now it’s commonplace. Take risks, learn from your mistakes, and you’ll have a much higher chance of succeeding.

Things continue to change rapidly in the music industry, as old sources of income are drying up and new sources are emerging. When the world is uncertain, one temptation is to play it safe. As economies contract and a perception of “things are tight” pervades, people don’t want risky art or challenging new ideas, they want to be reminded of the familiar, the safe, the known. They are looking for comfort.

On the flip side, new technologies are skyrocketing what is possible in leaps and bounds. Yet with infinite possibilities often comes a kind of decision-making paralysis. Like the jungle-dwelling native who becomes paralyzed with fear when taken out to see a flat plain with no trees, being faced with too many choices and possibilities can lead to a creative shutdown.

But you can’t let the overwhelm of what some are calling the “quantum era” (based on the theories of quantum physics which have transformed our perceptions of reality) force you into inactivity. Quite the contrary! When the possibilities are endless, you need to look within yourself and rethink your motivation, approach, and methods. Dig deep and find answers there. What is true for you? What is your journey? These questions matter more and more in this day and age as your unique contribution will always be the one thing that you and only you can bring to the table.

So, with the clowns of contraction to the left and the jokers of possibility to the right, where does that leave you? Stuck in the middle – you know the tune. But there’s no need to be stuck! Times like these are made for bold risk-takers. With the infinite possibilities of the quantum era comes the potential of a quantum leap toward making more money, creating more music, and reaping more rewards.

Here are some tips that can help you feel the fear, face it, and act in spite of it.

When you take risks, sometimes you will succeed and sometimes you will fail. The bigger the risk, the bigger the reward – and the bigger potential belly flop. No matter how hard you try to avoid it, you will make mistakes and occasionally fail at your music. This is a good thing! If you are committed to the artistic life, there is no other way to become a better artist. It’s how you manage the failure that will determine your artistic journey.

In scientific fields, failure is often seen as a natural part of experimentation. The scientific method is based on the process of experiment, fail, and experiment again. The same is true for the arts. Without failure, music and art would remain stagnant and “safe.” If you ever want to see examples of safe “art,” watch some of the live (non-animated) Disney Channel shows popular with today’s elementary school kids (if you’re a parent suffering through this, I feel your pain). Any artist with a large catalog of releases has likely made some lousy albums on his or her way to new and exciting work (Bob Dylan, David Bowie, and Miles Davis come to mind).

So the first step is to define what failure is for you. Is it commercial? Artistic? Both? There’s a million out there: artistically successful albums that didn’t sell and commercially successful albums that stink. The fear of commercial failure and ignominy can lead to a lack of risk-taking creatively, though. You need to give yourself the freedom to experiment with style, technique, the writing process, and even recording methods. This is how we discover who we are as artists, and ultimately this is your most valuable creative currency, because no one can deliver your unique contributions to the music world but you!

This can also lead to the very important opposite question: What is success? Defining success gives you a goal to shoot for and a vision to accomplish, and there’s no one single answer.

Be ready to fail

The most successful among us have failed, and often they have failed more than they’ve succeeded! Human being make mistakes. That’s what makes us people. Most successful people say, since you are going to fail, fail BIG and fail OFTEN. Screw up colossally! Take crazy chances with your next song, play, poem, or novel. Like I mentioned in “Creative Strategies to Keep Your Songwriting Flowing,” a willingness to make bad art will open the door to finding your unique creative voice. While the modern music business can be extremely results-oriented, the creative side is all about process.

This is not easy. Many of us have financial pressures because we’re responsible adults with children. For older artists, risk-taking can feel frightening because we fear aging and not having enough money to live. It’s easier in the teen and 20-something years to eschew commercial aspirations in favor of focusing on art, but also tougher in those years to weather the storms of emotional failure. Often younger people take failure harder because it feels like the end of the world. With experience and maturity comes a certain kind of artistic confidence to be able to discern your failures. When I was younger I’d think, “I screwed up that song. I suck as a singer and an artist.” Like the opera singer Janai Brugger says, “Every setback is a huge learning experience, and means that some other door will open. Have faith and trust in that.” That quote comes from “The Art of Failure: The Importance of Risk and Experimentation,” a 2014 publication from the National Endowment of the Arts featuring interviews with many brilliant artists from different disciplines on the importance of failure in their work. I highly recommend you check it out.

It’s important to find a balance between thinking you’re the Divinely Ordained Gift to Music and thinking you’re horrible and should never make a musical sound again. The constant ability to be self-aware and realize how to fix things that go wrong is a valuable life skill that will lead to constant improvement in your art. So the way to fail correctly is not take it too much to heart. Realize that you are a worthwhile person and artist with a lot to say and writing one or two (or 20) bad songs does not mean you should stop. Take risks, learn from your mistakes, and you’ll have a much higher chance of succeeding. A creative life is about the journey, not the destination.

In quantum physics, reality and truth are not as absolute and fixed as we think they are. Those who subscribe to the notion that we are living in the quantum era believe that this discovery is having a ripple effect through all facets of our society – political, social, and artistic. One manifestation in the music business is the breakdown of the old traditional ways of doing things. When the fixed truths disappear, we have to figure out new avenues of possibility. We can complain about the failure of the music industry to provide us with artist-based recording contracts, or we can attempt to solve the problem of how artists can make money in the new world, like Jack Conte did when he formed Patreon or the numerous entrepreneurs who have formed crowdfunding sites and creative music resources. Successful risk-taking always involves rethinking the possible. The four-minute mile was impossible until Roger Bannister broke it; now it’s commonplace.

Another example of the quantum era taking hold is the disappearance of time, explained at the quantum level by the theory of entanglement. It’s extremely complex, but basically scientists have proven that two particles can have a relationship to each other that transcends time and space. Think about it – we live in a time where practically all of recorded music is available at our fingertips. It has never been like this before! We can listen to Robert Johnson and Drake back to back on the same playlist. Music that was recorded 100 years ago is as viable and accessible as music recorded yesterday, which means modern music can be influenced by these older sources just as readily as the current pop charts. This allows us to rethink what’s possible in music artistically.

When taking risks and evaluating the terrain, it’s important not to artificially impose limitations on yourself of what is possible – the path to a solution lies in rethinking what’s possible. This stretches to all sorts of elements we hold as constant. Some, such as songwriting teacher Mike Errico, have posited that even the length of the three-minute pop song might be anachronistic. With so much uncertainty, it’s not exactly clear what a modern pathway to success looks like. Jack Conte has made a name for himself by establishing structure where there was none (the “videosong” format his band pioneered on YouTube), some have made names for themselves through pursuit of a strong musical vision and relentless touring.

Focusing on finding your path and being open to the arcane, the strange, and the unexpected is a much more viable career strategy in the quantum era than expecting to be discovered by the next John Hammond or other great A&R guy (though that might happen too). The Schwab’s drugstore counter where numerous Hollywood stars were discovered has not necessarily disappeared; it’s just that we are now the ones there discovering ourselves.

Related Posts
Why a portfolio music career is right for you
Five traits you need to make a living in the music business
Creative strategies to keep your songwriting flowing
Predictions for the music industry: Part 1
Want music success? You’ve got to love the grind.
Eight music video ideas to help grow your YouTube channel

7 thoughts on “Take risks with your music”