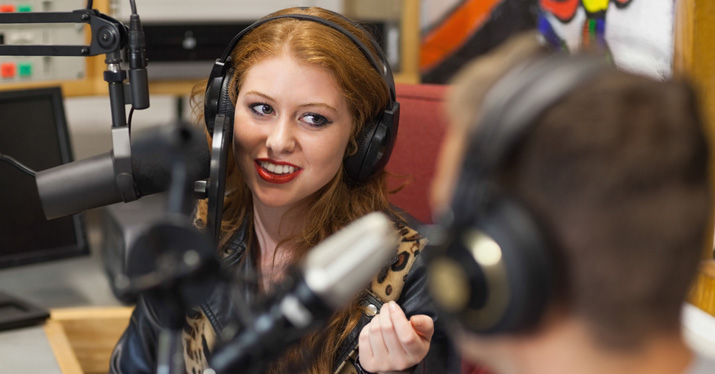 Part 2 of our series on non-commercial radio looks at KDVS in California and the model it employs as a self-described non-Top 40 station.

Going to college and community stations

As mentioned in Part 1 of this post, the majority of NPR-affiliated non-commercial radio stations have ties to a college. That said, there are many college radio stations that are not part of the NPR family. One such station is KDVS, located on the campus of University of California Davis, an hour northeast of San Francisco. KDVS is a true community-based station, combining the youth, talent, and energy of UC Davis students with local community members who share a passion for music and culture.

Davis is a college town of about 65,000 residents boasting a higher-than-average percentage of college graduates. Like many college towns, it has an eclectic indie spirit and is informally known as the bicycling capitol of the state. Since first going on the air in 1963, KDVS has been a pioneer in what is defined as “free form FM” radio, where each individual disc jockey is able to curate his or her format based on their own musical tastes and what they believe their audience would appreciate. Check out the station’s current schedule to get an idea of just how diverse the programming can be.

With shows titled Prog Rock Palace, Buried Alive in the Blues, and The Mosh Pit, the station features music you won’t hear on most any commercial radio station.

I spoke with the station’s general manager, Olivia Henderson, who confirmed that the majority of the station’s 24/7, 365 day a year fare is music. “We do talk programming from 8:00-9:30 am, 4:30-6:00 pm, and Democracy Now! airs from noon-1:00 pm; but otherwise it’s all music,” she says. “The station’s staff is made up 50-50 between students and community members. We only have two guidelines when it comes to programming: don’t run afoul of FCC rules and don’t play any Top 40 music, unless it’s for educational purposes.”

I asked how bands could have their music considered for play, and Henderson says a band rep can send her an email or connect with the station’s music director listed on their website. The station prefers a physical copy of the music – CD, vinyl, or even a cassette. “We can’t use a digital-only track as we play from physical copies and have the second largest music library west of the Mississippi,” Henderson explains, “with CD preferred because it’s easiest to cue up. If we like the music, we’ll add it to the station library. Since we are a free-form format, the music that’s played is exactly what the disc jockey wants to program.”

KDVS also occasionally hosts a Live from Studio A session, which is a pre-recorded live concert taped at the station during the day and then replayed in the evening. Another weekly show, Tuesday night’s The Chicken Years, hosted by Mr. Mick Mucus, has invited musicians right into the studio to broadcast a set live on the air.

When I asked about live events the station supports, Henderson revealed that less than 20 percent of the station’s funding comes from the university, leaving her and the rest of the staff to raise the bulk of their annual budget. The methods they rely on include various events throughout the year, many with a focus on presenting live music in the community. The station has an events director who leads the efforts, which culminate in a major music festival near the end of May each year dubbed “Operation Restore Maximum Freedom” or ORMF.

“At ORMF, we’ll have 15-20 bands from all over the West Coast play throughout the day with a local venue as partner,” Olivia explains. “Last year it was held at Sudwerk Brewing Co., a local craft brewery, and the ticket was $20 for a full day of music. We also host a range of house concerts every month, in homes, galleries, and other spaces where we’ll ask the audience to make a donation that we then split with the performers. We’ll also program music once a week at the campus farmer’s market, as well as host two week-long fundraising events with live disc jockeys and bands playing at locations throughout the Davis community.

“We invest a lot of time presenting live music throughout the community,” she concludes, “and end up working with dozens of indie bands and artists every year.”

Unlike mainstream commercial radio, the opportunities to have your music programmed at KDVS – or possibly partner for a live performance opportunity – are limited only by the appeal of your music and your ability to strike up a relationship with the station’s staff and show hosts.

If you’re wondering if there is a station like KDVS near you, note that KDVS is part of the Pacifica Network of non-commercial stations, with nearly 200 stations listed on its website. Self-identified as a “broadcasting network for grass-roots community radio,” members of the Pacifica Network, like KDVS, are proud of their singularity. And for artists who don’t fit the current mold of the mainstream music industry, Pacifica Network affiliate stations offer a pathway to building relationships with independent-minded music programmers, and an audience that is not on the lookout for the latest hit record from the Billboard charts.

There’s no question that a DIY approach to court non-commercial radio broadcasters requires research to find stations and markets that will fit your demographic target market. Once you build up a database of the stations and key personnel to contact – usually the music director, program director, or head of programming – the journey of sending emails and making follow up calls begins. The patience and persistence required is demanding, but if you invest the time and are tenacious, you might generate honest feedback and cultivate relationships that can lead to airplay or an invitation to perform in-studio or at a station-sponsored event. Of course, before you reach out to any station, listen to a webcast to get familiar with its programming to ensure your music fits the station’s preferences. Don’t make the mistake of sending death metal to a station that only programs classical music!

If you don’t have the fortitude and persistence to keep a sunny disposition and do the necessary legwork, check out “How to Get Your Music Played on College Radio” by Patrick Hertz. In this article, he offers simple ideas for doing your own DIY college radio promotion. He also provides links to a few firms that do fee-based 60-day college radio marketing campaigns for indie artists. There is also the College Music Journal (CMJ), the bellwether of new music trending on 200 college radio stations across America. Programmers such as Nick Brunner from NPR affiliate Capital Public Radio keep an eye on it, as do indie and major record labels and mainstream radio programmers who are trying to get ahead of the competition and identify the next X Ambassadors or Leon Bridges.

Because of the changes to American radio in the past 20 years, it’s an easy argument that non-commercial and college radio is where Indie artists should be prospecting for promotion and spins. These non-commercial stations also rely on local community members to help as volunteers, with indie artists regularly tapped to play shows or make an in-studio appearance. As you build relationships with local, independent radio personnel, ask what you and your band can do as local volunteers.

The indie music scene needs non-commercial radio’s tastemakers, the music industry mavericks willing to take a chance on new music and deviate from the mainstream. To be sure, our whole nation relies on a free and objective media, so get involved and find opportunities to build your audience and be part of the movement to counterbalance the homogenization of our nation’s commercial radio airwaves.

Part 1 of this post explores a brief history of radio deregulation, its impact on the national radio market, and the opportunity local non-commercial radio represents to indie musicians.

Story Links
KDVS FAQ page
Includes tips for submitting music to their programmers, and likely transfer to many other non-commercial stations.

Global Hit
Does your band feature international music or band members? Public Radio International’s The World, a daily news and information show airing on 300 stations, has a segment called “Global Hit” that features a wide range of world musicians.

Start and Run Your Own Record Label
Daylle Deanna Schwartz’s informative book has a great chapter that offers real-world, commonsense advice on how to approach radio and build relationships to get airtime.

The Indie Bible and The Musician’s Atlas
Two directories that have lists of indie-friendly radio stations.

NPR Stations and Public Media
Learn how NPR affiliate stations are managed for the public benefit and why they have a vested interest in being the voice of their local communities. You can also find your closest NPR affiliate using the zip code finder.

The Death of Diversity in U.S. Broadcast Ownership
Jeffrey Blevins penned this thoughtful and disturbing piece in Cincinnati’s City beat documents how media consolidation has resulted in not one single TV station being owned by a minority, greatly stifling diversity.

Who Owns The Media
A link to the Pew Foundation’s 2011 report on major media ownership.

Keith Hatschek subbed as a late night college radio disk jockey at KUCR Radio in the 1970s. He’s a regular contributor to Disc Makers Echoes blog and directs the Music Management Program at University of the Pacific. He has also written two music industry books, How to Get a Job in the Music Industry, which just came out in its third edition, and The Golden Moment: Recording Secrets from the Pros.

Related Posts
Can radio boost your music career? Pt. 1: Commercial vs. non-commercial radio
How to submit your songs to music blogs, record labels, radio, and press
How to run a successful record label (by giving away the music)
Predictions for the music industry: Part 1
Placing your music in video games: advice from Halo composer Tom Salta
Performing Rights Organizations – a history and overview