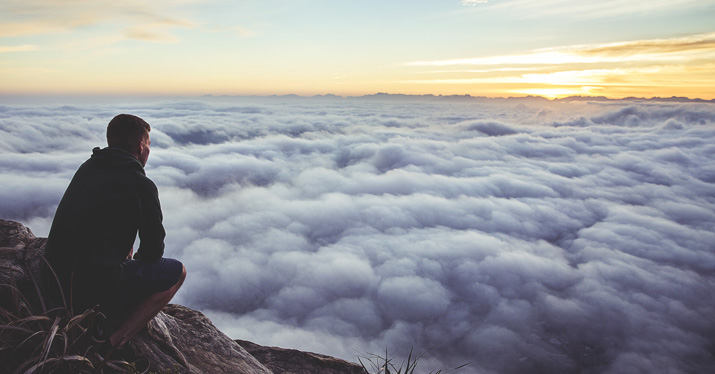 Think about the first instrument you owned or played. How excited were you just holding it? Think about the excitement you feel when you buy a new pedal or piece of studio gear before you’ve learned to use it. This is beginner’s mind.

Whatever your current interests, it’s an interesting exercise to think back to your childhood and early teens to a time before your critical adult mind kicked in. It might give you new insights into your own current interests and the foundation they’re built on.

Personally, I’ve always been interested in spirituality and world religions. My father was a broad-minded hippie theologian and academic, so I think I started exploring this topic with his all-inclusive attitude. I’ve spent many years reading books and practicing various principles of Buddhism, and there is a concept I’ve always admired in Zen Buddhism called shoshin, or “beginner’s mind.” Simply put, it is an attitude of openness, enthusiasm, and lack of preconceptions when approaching a subject or task.

Think about the first instrument you owned or played. How excited were you just holding it, even before you had learned to play? Think about the excitement you feel when you buy a new pedal or piece of studio gear before you’ve learned to use it. This is beginner’s mind.

As a guitar teacher, I always prefer teaching beginners, and it is mainly because of their attitude (shoshin). Beginners don’t think they “know” anything; they are open to whatever teachings might come their way and open to trying any suggested method of practice. In his book Zen Mind, Beginner’s Mind, the great Zen teacher Shunryu Suzuki describes it as such: “In the beginner’s mind there are many possibilities, but in the expert’s mind there are very few.”

A beginner’s mind is a ready mind and an empty mind, doubt and possibility exist simultaneously. Heavy concept! But for any student of music and life, it is as important to question things as it is to be open to possibilities. So here are some ideas I have about how having a beginner’s mind makes you a better musician and/or music professional.

If there’s any one hallmark of beginners, it’s that they absolutely know they don’t know everything. Some think they don’t know anything! It has become a cliché, but I believe paraphrasing Alexander Pope applies here: “A little knowledge can be dangerous.” Thinking you know something and being eager to show that off often gets in the way of letting your authentic creative voice shine through.

The players and artists I truly admire were always searching; they never saw themselves as completed, finished products. The same goes for audio engineers and producers. The late great Sir George Martin said, “When you’re young, you’re not only confident, but damned arrogant. I was full of myself and thought I was terrific. I didn’t realize how inadequate I was.” By the time the Beatles came into his studio, he felt he was of sufficient maturity to have something to offer: a willingness to experiment and stay open.

Who likes to work with a know-it-all? Does it inspire you to play your best? And do know-it-alls really know it all or just think they do? David Bowie would hire players who could do things he couldn’t and who he trusted to bring their “best selves” to the table, meaning that he wasn’t going to micromanage their performances and contributions. Not surprisingly, many musicians who recorded with him did their best work on his records.

This isn’t just a Zen concept either. Socrates is often credited with the phase “I know one thing: that I know nothing.” Whether he actually said that or not is debatable, but the concept remains. You don’t need to show off your knowledge; there is no one you need to impress. Knowing the limits of your own skill and knowledge will impress people more as you will be the kind of person that people are naturally attracted to. To reverse the Alexander Pope statement: “A little humility goes a long way.” And in turn, your open beginner’s mind will maximize the creative flow – both alone and in collaboration.

A friend of mine recently described an encounter with a famous engineer who had recorded some of the greatest bands of all time. His engineering philosophy in a nutshell: “Use your ears. If the mic sounds good there, leave it. If it doesn’t, move it.”

There is really no manual on how to make records or perform rock music. There are things that can be taught; music and engineering schools exist for a good reason. But even great players and pros with proven track records often cannot duplicate previous successes, and performers with 20 years’ experience don’t necessarily know how to engage an audience. Those who overly complicate are often trying to compensate for the insecurity they feel or a belief that they don’t know something. There is no need to be insecure! Keeping things simple will allow your beginner’s mind to stay open to possibilities and keep you in the present moment where things can happen and you can learn.

John Lennon boiled down his songwriting method to this: “Say what you mean, make it rhyme, and put it to a backbeat.” Our minds want to complicate things; it makes us feel like we’re doing something. Following the path of beginner’s mind, we focus on the next right thing to do and don’t worry so much about being right. This does not mean don’t have goals and don’t be focused – on the contrary! You are more likely to achieve your goals if you approach them with beginner’s mind, with full attention on an activity as if you were doing it for the very first time. This is what many motivational coaches call “working smarter, not harder.”

Creativity involves repetition. Learning to play an instrument, recording and mixing an album, writing songs, and learning a new piece of gear all involve repeating similar actions over and over and over again. When I was listening to a recent recording from one of my gigs the other day, my daughter asked me if I thought it was weird listening to myself sing. I told her no, that I was used to it after so many years, but the more that I thought about it, the more that I thought yes, it still is always a little weird. And that’s good! The fact that it’s weird keeps me from falling too in love with my own music and losing all perspective. That is beginner’s mind in action.

Beginners may be alternately excited and freaked out the first time they hear themselves professionally recorded and/or filmed. I believe it’s important to have both to maintain perspective. If you are too freaked out, you will hate everything you do and throw out the musical baby with the bathwater. If you’re too excited, you’ll be too in love with your own music and won’t be able to discern what’s working and what’s not.

Even deep into our musical careers, we may have to start again. Every time an artist makes a record, even if it sells a million copies, he has to answer the question, “What’s next?” For those who have suffered great creative or commercial disappointments, starting again can feel like a fate worse than death. Even those with great success can be so intimidated to repeat it that they feel paralyzed trying. This is where beginner’s mind helps. One Zen practice (though not unique to Zen) is the repetition of mantra – repeating words or phrases over and over again. The goal of beginner’s mind is keep these repetitions fresh. Whether you are practicing a C major scale or trying to learn the left hand of Liszt’s Hungarian Rhapsody #2, approaching them as if you were practicing them for the first time will keep you enthusiastic and make the work seem like play.

This is not easy! Our society is geared towards experts. We hear them pontificating on the news channels, on sports shows, and in music magazines. Laurie Anderson has a wonderful take on this in her brilliant song “Only An Expert,” where she mocks the societal expectation that “only an expert can deal with a problem.” Beginner’s mind is the antithesis of this. It says that to make real progress in our practice, we need to stay open, simple, and straightforward. We shouldn’t be “trying” to make something skillful or beautiful; we should be focusing on the present moment and working with full attention as if we are discovering what we are doing for the first time.

Rock music has a good track record with beginner’s mind. It is generally accepted that beginners have just as much potential to “get it right” as those who are considered experts. “Louie Louie” is as valid as Yes’ “Heart of the Sunrise” – it’s certainly more widely known. In your own musical endeavors, it can be very frightening to start again. A helpful thing I’ve found is to try to reconnect with the feelings and reasons that got you started in the first place. This is a direct hotline to the beginner’s mind, to a time before things got complicated, when you would follow a musical impulse without question. Cling to that. You will need it when you start again, and your work will ultimately be more creatively satisfying if it comes from an open beginner’s mind.

Related Posts
Burned out? Maybe it’s time to pause and refill the well.
13 musicians and music icons who died in 2016 (so far)
A Great Live Music Performance Requires More Than Being Rehearsed
How do you achieve success as an indie artist? Enjoy baking and sell your bread.
Psychology and the music producer