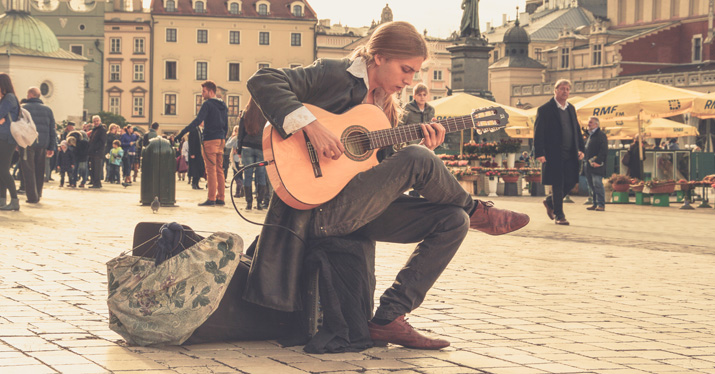 Being an organic musical artist doesn’t mean you shouldn’t cultivate an image and market yourself. You need to identify your “known unknowns,” create an artistic lane, and rethink your definition of “organic.”

“Nothing attracts a crowd like a crowd” – P.T. Barnum

Without the management of Colonel Tom Parker, Elvis Presley would never have been The King. It is interesting that Parker, not unlike P.T. Barnum, had spent time as carnival huckster, with an affinity for luring bystanders into the tent. Parker understood showmanship and how to monetize talent, which Elvis had. But without Colonel Parker, we probably wouldn’t have ever heard of Elvis.

You may think the image, artistic career arc, and performance style of your musical favorites and influences evolved organically, even magically, as if the artists always had a clear vision of what they were going to be, were always polished and ready to go, and were just waiting for their audience to catch on.

Not so. Just about every popular musical artist was developed artistically and commercially in the marketplace.

Brian Epstein, the Beatles’ manager, worked in his family’s furniture store. He was a music lover, and he also worked in another family business, a record store called North End Music Stores (NEMS), which is how the Beatles came into his awareness. Though he had no previous experience managing a musical act, Epstein had a major influence on the Beatles’ transformation. If the definition of “organic” means “to happen naturally without preconception or outside guidance,” theirs was not a simple organic progression.

In regard to their image, Epstein insisted The Fab Four clean up a bit. Yes, they had unusually long hair for the early ’60s, but Epstein wanted it trimmed evenly and styled. When Epstein met the Beatles, they were scruffy, when he was through with the makeover, they were clean shaven. Epstein even added the touch of the famous black suits with the ties.

Epstein taught the band to bow and thank the audience after completing each song. This promoted the Beatles with the safe, socially acceptable image of four boys you could bring home to mom, which is exactly what Epstein envisioned. What’s more, the Beatles agreed to do it, which is rare. Often, artists will fight taking outside instruction or doing anything foreign to their own creative impulse. You’ve heard it before: “I just want to be as organic as possible.”

Now let’s talk about how Beatlemania began. Did the band cut a record, get distribution in a few records stores, and sit back and watch the pandemonium ensue? No.

Did an army of “tastemakers” pick up their first single, freak out, and share it with two friends, who then told two friends, and so on, until they became a sensation? Not exactly.

Understanding that people respond to momentum, even if it’s manufactured momentum, Epstein helped manipulate the band’s market force by gaming the British charts. He was shrewd enough to know there were 11 record stores in his locality that reported to the chart company. Epstein would send out fans/friends, with his money, and have them purchase records at these select stores on the day of release. This would get the record immediately charting, which got the public and the industry’s attention.

Did this artificially create a #1 record? No. But it did give the Beatles enough credibility to get industry and radio people talking. This clever move also built the bandwagon for consumers to join the ranks of Beatles’ fans because everybody else was clearly liking them. There are the early adopters, and then there are the people who think they’re the early adopters because the crowd is small enough that they’re still part of an exclusive group – but big enough that there’s a bandwagon to hop onto.

So was the Beatles’ rise organic? Maybe. Then again, my definition of organic is usually different than an artist’s. You see, I believe that all the gaming of the system, all the hustle, marketing, all the payola, and all the money in the world won’t make a crappy or derivative record good, or even popular. At the same time, a fresh, original, uniquely talented artist will remain a nobody without applying some or all of these marketing techniques.

Epstein had lightning in a bottle and he knew what to do with it. He was able to introduce it to the public in a manner that allowed it get its own legs and create sustained momentum. Thankfully, the Beatles were smart enough, talented enough, and had enough faith in the strategy to let Epstein execute his plan while they did their part.

So the fact that Andrew Loog Oldham, the original manager for the Rolling Stones, started out as Brian Epstein’s assistant should come as no surprise. Oldham did exactly the same thing with the Stones.

Of course, Oldham needed a new artistic lane. The Stones had to be different. He suggested that the Rolling Stones be the “anti-Beatles.” He wanted them scruffy, not clean cut. He wanted them in leather or hipster mod clothing, not in suits. He wanted them to be dangerous, not “boys you could take home to mother.”

Was this organic? It depends on how you look at it.

As Bill Curbishley, manager of the Who, once said: “When God gives you something special – a talent – he takes a little bit away from somewhere else. If you look at any artist, they’ve all got something missing. And I’m the guy that replaces it.”

Scott Borchetta recognized there were no country artists who were writing and speaking for 9-14 year old kids when he encountered Taylor Swift. They created a whole new artistic lane.

How is your artistic lane different from what is already going on? What pieces are you missing, your “known unknowns,” that will require you to have faith in someone else? Is it time to rethink your definition of “organic”? These are the questions a smart artist should be asking.

2 thoughts on “Are you an organic musical artist? That depends on your definition.”