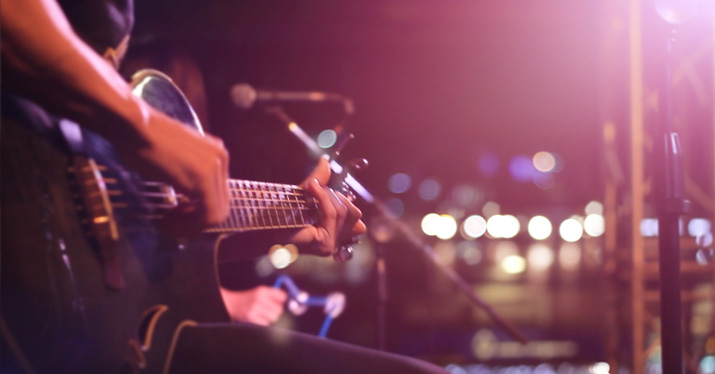 Whether it’s a virtuosic guitar, a transcendent piano, or a funky breakdown on bass, a great solo can add power and personality to songs in any genre.

Spicing your song up with a great solo isn’t all about playing certain notes between verses or trying to sound like Jimi Hendrix before the final chorus; indie artists of all styles should think about solos not just as opportunities to shred, but as parts of the song’s overall composition, opportunities to add depth, power, nuance, or momentum.

Here are case studies that can shed some light on how to make your own solo the best it can be – for you as the artist or band, your audience, and the song itself.

[Solo @ 5:34] I love the solo on this Grammy-nominated song from the very first notes, when James Hetfields’ climactic scream at 5:34 in the song seems to morph seamlessly into the first dirty chords of Kirk Hammett’s guitar rampage. During the solo, Hammett changes up guitar texture at just the right times, leaning into the wah wah pedal to keep things boiling. Most interestingly, though, the descending riff at the end of the instrumental, around 6:28, is attention grabbing – in all the right ways.

Why is this? For the vast majority of the solo, Hammett plays “in,” choosing notes that reside comfortably within the relevant chord scales as the solo chugs along. At that final point, though, the figures he plays are more “out,” venturing beyond the obvious note choices and throwing in some dirty, angular chromaticism. After so much “in” playing, the “out” phrases come off as jagged and powerful.

There’s a lot of good stuff to learn from Hammett’s playing – starting (or ending) your solo in a way that uses the vocals as a launching or landing pad and incorporating different effects to change up your tone mid-solo for excitement – but the “in” and “out” dichotomy is the most interesting to me. In your own playing, experiment with notes that fit smoothly within whatever chord you happen to be playing over, but then try throwing in some notes that definitely do not fit. Mixing in some chromatic phrases, or even dissonant note choices, is an art that requires good taste and lots of practice, but if you learn to do it right, it can be a great skill to bring to play in your own solos.

Dixie Chicks, “Cowboy Take Me Away”

[Solo @ 2:26] The first noteworthy thing about this solo? It’s played not with guitar – the instrument we tend to hear the most when it comes to solos in popular music styles – but a fiddle. Even though fiddle may be a widely utilized instrument in country music, it’s placement as such a prominent solo instrument here adds a unique, soaring feel to the song.

The solo is also notable simply because it’s played well, and fits perfectly within the context of the song. The solo doesn’t get cluttered with too many notes and the build to the uplifting, sustained high notes towards the end reflects the bittersweet longing of the central story.

In crafting your own solos, try following the Dixie Chicks’ example by using an instrument that might be a little unconventional, but that gives you a sound that gels well with the rest of your song’s soundscape. And as you choose what notes and phrases to play, make sure that, emotionally, you do your best to reflect the scope and meaning of the song – and not just solo for the sake of soloing.

[Solo @ 2:30] When the harmonica solo kicks in, it is masterfully crafted and unmistakable as a Blues Traveler signature. Plus, John Popper’s rapid, double-time figures do a great job of foreshadowing the equally rapid, double-time vocals that come in immediately after the solo. That said, the solo is not a constant flurry of notes; rather, it’s a playful mix of rapid phrases and tasteful pauses, an approach which keeps the solo propulsive and interesting, rather than boring or numbing.

To channel the best elements of this solo in your own playing, again, try picking an instrument or tone that might be a little different, but that works in the context of your song. Then, regardless of whether your song is fast or slow, dense or sparse, mix things up with your playing – some notes in rapid succession and then some pauses or sustained notes, and vice versa. As described above, do this with the overall intention of the song in mind and you might be surprised by what you come up with.

[Solo @ 3:39] What makes this solo so remarkable is how Mike McCready manages to build excitement and fury over the same four chords, repeated over and over again. Interestingly, he does this without resorting to obvious tactics of playing faster, louder, and higher; rather, he just crafts tasty phrase after tasty phrase, alternating between chords and notes, using the entire range of his guitar, and patiently riding the swelling energy provided by the rest of the band.

Want to do the same in your own solos? Get your band to start at a moderate level of energy, cycling through the same simple chord progress, and start your own slow burn on top of it. See how long a build you can sustain, just like McCready, without getting impatient. You might end up with an anthemic solo for the ages, like the one in “Alive.”

[Solo @ 4:39] 6:00 7:13 Whether you love them or hate them, there’s no arguing that the members of Phish are extremely talented musicians, and Page McConnell’s piano solo to close “The Squirming Coil” is a great example of this. McConnell slowly brings the energy of the song to a peaceful, virtuosic, and beautiful close, showing his proficiency at incorporating genres like blues and gospel, pop and classical, in a seamless and effortless way. He also takes his time doing so, all without boring the listener. None of this is an easy feat.

Choose one of your own songs that could benefit from an instrumental epilogue, take some time to experiment (in the rehearsal studio or even on stage), and see what happens. You can try this just like Phish does in the recording, with the band gradually fading out as the solo takes hold. Try to tell an entire story through your extended solo as it takes the song to rest. As always, don’t play notes for the sake of playing notes, and don’t make the solo drag on just because you can; rather, use it as an opportunity to reflect on what you just played, to channel the entire power and meaning of the song through just a single, solo instrument, or to do something else entirely. Sound chaotic or uncomfortable? It could well be, but that’s the nature of soloing sometimes. There’s no reason not to try and see what magical, unexpected things might just happen.

What are some of your favorite instrumental solos, and what did you learn from them that you applied to your own playing? Share your thoughts in the comments below.

7 thoughts on “A great solo can elevate your song”