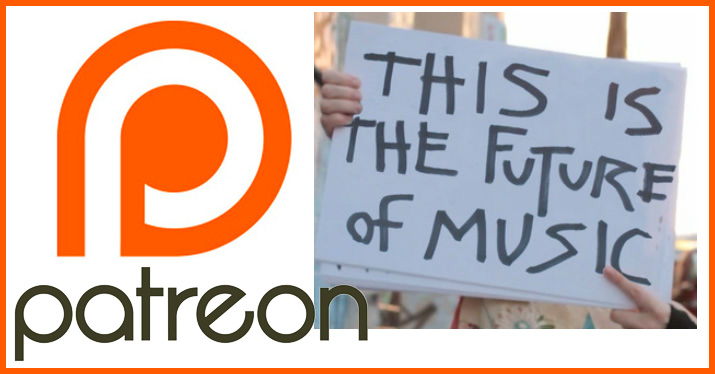 Patreon offers artists with a following a path to a sustainable, recurring income through its platform, ushering in the era of crowdfunding 2.0.

Hardly a day goes by that we don’t hear of another artist that who has launched a crowdfunding campaign to underwrite an album, tour, or other creative endeavor. And while we often read about notable successes, such as Amanda Palmer’s $1.2 million Kickstarter campaign that made global headlines, few artists command her level of fan dedication and loyalty. Palmer, perhaps the most savvy and successful social media maven, has utilized a range of platforms to provide her audience with the opportunity to support her art. But one platform she now embraces, San Francisco-based Patreon, is providing artists the opportunity to change the strategy of how to engage with audiences and find sustainable financial support in a way that may be a game changer for indie artists – the era of crowdfunding 2.0.

Instead of the traditional short-term, “reach a goal” campaigns typically managed using Kickstarter, IndieGoGo, or Pledge Music, Patreon allows artists to ask their fans to support them with a fixed amount of money – either monthly or on a per-project basis. So instead of a “one and done” hit to the fan’s Visa card to support an album, tour, or special project, the Patreon fan (or “Patron”) signs up for an ongoing monetary relationship with the artist. It’s analogous to paying $10 bucks to see a movie in the theater versus $10 per month to subscribe to HBO – but in this case you’re subscribing to an artist’s channel.

To put global crowdfunding activity in perspective, realize that it’s growing at a phenomenal rate. In 2013, the World Bank reported that $6.1 billion was raised through 344 different crowdfunding platforms; two years later, individuals and organizations using crowdfunding received $34 billion. Gazing into their crystal ball, the World Bank reports that within 25 years, crowdfunding campaigns are likely to result in $90-96 billion in annual funding. The potential for bands, start ups, nonprofits, comedians, and film makers to tap into this growing trend means crowdfunding strategies deserve serious study. 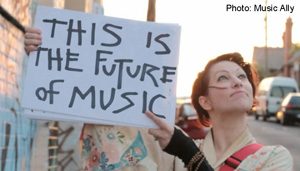 In Palmer’s case, the current level of support her fan base has committed to her on Patreon whenever she releases anything new is just north of $35,000 and growing daily. While she shares everything she creates online for free, her Patreon backers receive it first. Palmer currently has 7,959 patrons with the average amount pledged per “thing” she creates pegged at just $4.59 each.

Scanning the top 10 Patreon creators, their collective per-patron average varies between $2.50 to $8.00 per month or thing.

Palmer creates, on average, one new “thing” per month. At that rate, forgetting any growth in patrons she may accumulate, she can project an annual income of $400,000 for her work from her nearly 8,000 patrons. That’s not all profit, of course, as she’s got actual expenses to create the new works, plus she has a small full time staff. She discusses this model in her Patreon post explaining to her fans why she migrated from Kickstarter to Patreon. It’s vital to realize that since she already has developed an extensive social media network, her cost to announce and market her new works is basically the time it takes for her to craft her messages across various social media platforms and hit the various “Send” buttons. That’s the payoff in having developed your artist brand online.

Looking beyond musical types, the Patreon creative roster includes video game streamers, podcasters, comic writers, graphic artists, and film makers – all of whom are finding various levels of financial success on the platform. Based on these numbers, it’s clear that the model works for artists who have a following. At the time of this writing, Patreon is reportedly distributing approximately $2.5 million per month in patron support to its more than 17,000 creators. For their services, Patreon keeps five percent of every exchange and charges an additional three percent to cover credit card processing fees. 92 percent of the pledged funds go straight to the artist.

Patreon was started by a musician. Jack Conte, one half of the band Pomplamoose, who we’ve written about before, wanted to find a way for DIY artists outside the major label system to have a sustainable financial income they could rely on. With Sam Yam, his friend and programmer, he launched Patreon in May 2013 as a way to do just that. Within 90 days of their launch, the company drew the attention of investors and received $2.1 million in seed money that year. Since that time, the number of artists using Patreon has skyrocketed, as has funding from investors. Through January 2016, the firm, which has gone from two employees at its founding to more than 60, has received a total of $47 million backing from venture capital firms who are betting on Patreon’s long term success.

In a 2014 interview with Billboard, Conte stated, “On the Internet, it’s not just content that’s king… it’s regular content. But models like Kickstarter don’t work for regular content. And the advertising you earn on YouTube is nice, but it doesn’t seem to assign the appropriate value for the amount of work and passion that goes into certain types of content.” The last statement is putting it generously, to say the least.

Few artists will create a video viral sensation, a la “Gangnam Style,” which used a traditional label approach for creative and promotion; or “Harlem Shake,” which alternately was a DIY meme created by fans to match an excerpt from an EDM track, and then copied by thousands of other fans. These are outliers. Independent artists usually see very little income from YouTube plays. An article on Patreon in Forbes cited a stark example of YouTube vs. Patreon earnings for an artist named Molly Lewis. While her YouTube video got 14,000 views, a decent number for an emerging artist, it only generated $28 in earnings, whereas the same video posted on Patreon to her patrons earned her $2,000!

Further highlighting the difference between YouTube and Patreon, Conte has argued that ad-supported platforms treat each viewer as being worth the same amount, unlike Patreon which “reflects the actual strength of your fan base, and monetizes engagement accordingly,” meaning that a super fan can pledge $100 per month, while a casual fan can get on board for as little as $1 per month. Like many great ideas, Patreon is stunning in its simplicity. And it’s a model that YouTube, the largest single distribution channel for music in the world, is unlikely to embrace anytime soon.

How is Patreon different?

Patreon gives creatives an entirely different way to monetize their original content. Similar to Kickstarter or Pledge Music, many Patreon artists set different levels of support, so for instance, at $1 per video, fans get exclusive access to the latest video; for $5 per video, they may get that, plus another exclusive “making of” video and a link to a song download; more expensive subscription perks might include a Skype session with the artist, or for $250 or more being credited as an “Executive Producer” on the video itself. The options are only limited by your creativity and that of your fans – why not have them suggest what they would like to receive in exchange for providing ongoing regular support for your art? Patreon also has a support team that advises artists on how to ensure that the perks offered to patrons are scalable and don’t take so much time to make and deliver that you have no time left to create new art. This last point is critical, as the point of using a service such as Patreon is to free up the artist to create more great art!

Will it work for you?

Using an artist such as Amanda Palmer as the case study for why and how Patreon works may discourage an artist who so far has a few hundred followers on social media versus the 393,000 Facebook followers Palmer currently has. But Patreon isn’t just for social media superstar creators. In fact, these two charts give an accurate breakdown of how much Patreon creators are making and how many patrons they have accumulated so far, and give hope to those that are still in the process of building up their following.

Looking at the first chart below, in March 2016, just 100 of Patreon’s 4,647 (<2 percent) creators had more than 1,000 paying patrons, while 403 had more than 300 patrons (8.6 percent). However, 65 percent of the total number of Patreon creatives had a much more modest 30-plus patrons. It is important to note that the artists with 30-300 patrons are receiving a supplemental income to whatever else they are using to support themselves (day job, bar band, guitar teacher, etc.). As they continue to build their fan base and post new exclusive content to their patrons, their regular earnings will increase. 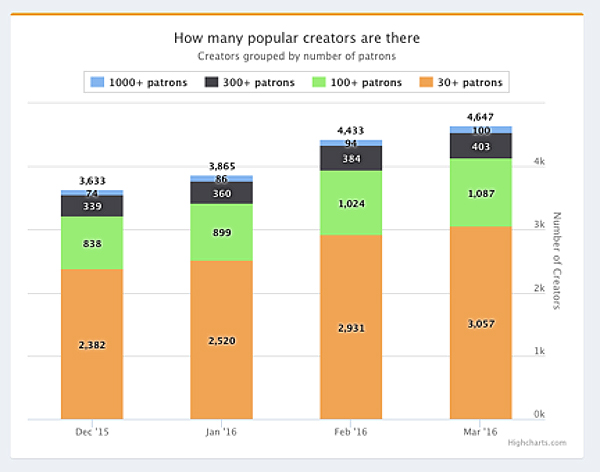 The second chart below, which tracks Patreon creatives’ revenues over the past four months, mirrors the first chart with a small percentage of the Patreon creative garnering the biggest receipts for their creative works. 213 creatives are receiving $3K-plus per work/month, while 726 are getting $1K-plus. (Graphs via of Graphtreon.com.) While these amounts may not be enough to pay the mortgage and car payment, the fact that so many artists are gaining direct, predictable payments from their fans points to a future where in time, they can build a community of patrons that is 100 percent capable of providing a sustainable income as a way of supporting original art. 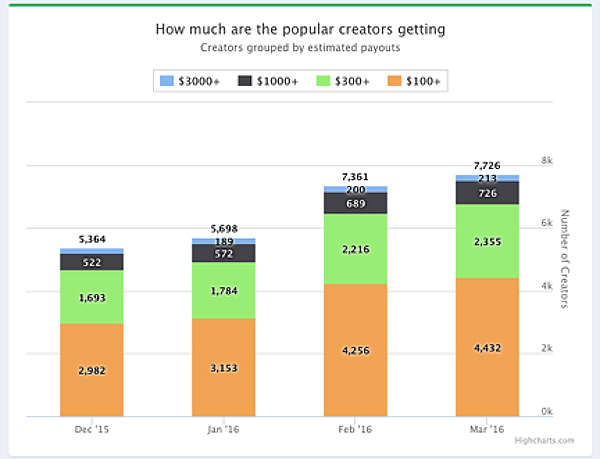 Clearly, Patreon is not an “If I build it, they will come” platform. For an artist to benefit, it is crucial that you have a clear voice and are developing a consistent and effective two-way dialog with followers and art that inspires a fan base to pledge support for things that you haven’t yet produced. Without that type of communication, the chances of receiving adequate support to actually grow a sustainable income is unlikely.

And don’t make the mistake of thinking only musicians and gamers can benefit from the Patreon model. Check out astronomer Neil deGrasse Tyson’s Star Talk Radio page, which has 500 patrons giving $3K/month support. If you have ideas, art, or any type of message that is meaningful to some group of individuals and want to build a community of financial support, Patreon can help you do it.

Special thanks to Brandon Dill for research assistance for this article.

Related Posts
Crowdfunding success is a process, not a fluke
Crowdfunding for musicians: tips, tactics, and trends
Give fans more reasons to buy your music
Developing your artist brand
How to leverage your YouTube music channel

One thought on “Crowdfunding 2.0: from project funding to career planning”