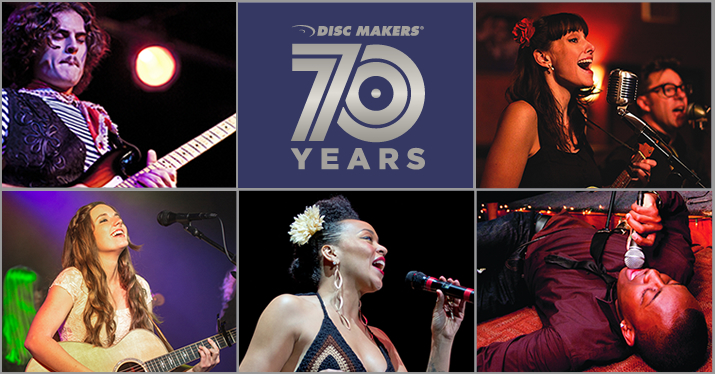 When I tell people I’ve been at Disc Makers for 20 years, they often assume that’s when the company was founded. When I say, “No, no, no – Disc Makers has been around for 70 years,” it’s usually followed by a strange silence. I can almost see the gears turning. Folks are hesitant to say anything, because they’re thinking, “CDs aren’t that old… no way, hold on, CDs came out in the ’80s right? Or was it the ’90s?”

I typically put them out of their misery and follow that up with, “Disc Makers predates the CD by many years. Things started with shellac records and vinyl. Then 8-tracks and cassettes, and then into CDs and optical media.”

Even that is followed with silence, as people try to grasp what the scene might have been like back in 1946 when Disc Makers was founded.

It is pretty amazing. 70 years for any company is a mighty good run, and 70 years for a company that has seen the rise and fall (and rebirth) of numerous products and media, in the ever-volatile world of the music industry, a family business where the owner knew everybody’s name… I’m getting all misty over here.

I arrived at Disc Makers ready to make a major life change. I was going to move from the East Coast and head to San Francisco (bike across the country, no less) and give music a try out there. Then someone recommended I check out the job posting for the Independent Music World Series, a little event Disc Makers was developing to celebrate indie music by showcasing independent artists all over the country.

When I walked in to the building, it’s hard to describe, but I could absolutely feel the creative energy in the place. It emanated from the people and the walls; it surrounded you. I’m not kidding, I think my heart rate was elevated just being here. Disc Makers had just moved, months before, to its current location here in Pennsauken, NJ. Its origins were Philadelphia, but the burgeoning CD market had made a move to a bigger and expandable location necessary.

The place was crawling (and considering what was going on in Marketing the moment I walked in, I can say it was literally crawling) with creative people. Musicians, graphic artists, writers, filmmakers – you could walk into any department and find folks who not only loved their work, but were living it. Needless to say, I dropped my plans to head west and joined the fray.

I was super lucky to get the gig. The IMWS was such an outside-the-box venture, and those of us who got to devote ourselves to it were rewarded with some pretty fantastic perks. We worked hard, just as everyone in the company does, but we got to travel and host parties and meet industry legends and see new cities and produce shows in iconic venues across the country, all in the name of putting the independent musician on a pedestal. And why not? This company owes everything to the independent musician.

So, I didn’t want to make this post about me, but it’s appropriate to get personal, because this place has a way of connecting those of us in the DM family to something we are passionate about, something very personal for us. And I’m a newbie compared to some of the folks in the building. There are people who, when I arrived, had already been at DM for 5, 10, 20 years… and they’re still here! Morris Ballen, whose father founded the place, was part of everything, part of our lives, part of the history of the company (and so was his brother, Larry). Morris is not around as much as when I got here, but he can still crash a meeting with the best of them. And I can claim the distinction of having played in President Tony van Veen’s re-formed band, at least for one night, at one of our first-ever DM Palooza shows. Wearing a dress I borrowed from one of the product specialists. This place has a way of making the strange seem normal.

We’ll be celebrating this milestone all year with special promotions and we’ll solicit more stories to post on the blog. In the meantime, enjoy this 70th anniversary Spotify playlist, made up of employee favorites:

And check out our 70th anniversary web page:

7 thoughts on “Disc Makers is celebrating its 70th anniversary”