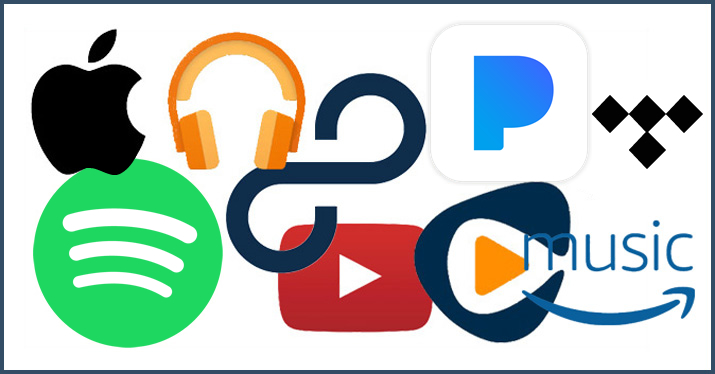 Our two-part look at music streaming 2016 includes this post about the current landscape and an overview of revenue equations in Part 2.

2015 was marked by a number of high-profile artists continuing to speak out against the music streaming business model while excluding their music from providers like Pandora, Spotify, Apple Music, Tidal, and many more. From Thom Yorke to Neil Young, Adele to Taylor Swift, mainstream artists have publicly challenged whether the streaming paradigm can ever be profitable for artists.

Brooks’ change of heart heralds the introduction of a new streaming service, Amazon Music Unlimited, the service where his music will exclusively be available. According to an article on The Verge, “Amazon has done a number of things to differentiate Music Unlimited from [Spotify, Apple Music, and Google Play Music], but the most notable one is its price: the service will be available to Amazon Prime members for $7.99 per month or $79 per year, which is cheaper than the premium options from Spotify or Apple Music. In addition, owners of one of Amazon’s voice-controlled Echo devices will be able to get the service for just $3.99 per month.” Amazon is also planning to attract listeners with major album exclusives.

So, should everyone else – especially indie artists – follow their lead in fighting the rising tide of music streaming?

The most recent stats from the Recording Industry Association of America (RIAA) that cover the first half of 2015, show that recorded music sales in the US are approaching a tipping point. According to the RIAA’s latest numbers, income to music rights holders from music streaming services for the first half of 2015 topped $1.03 billion in revenue.

Comparing the 2014 end of year income stats (top) with the first half of 2015 (bottom), you’ll find streaming’s contribution to overall revenue jumped from just over a quarter to nearly a third. That’s a 23% increase in just six month’s time. 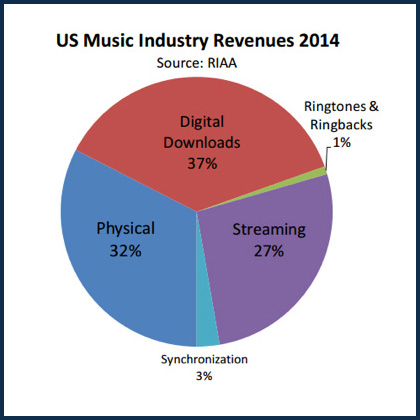 Assuming comparable growth going forward, within one to two years, streaming could become the dominant music revenue source reported by the RIAA. More importantly, making your music available on streaming services can introduce your music to a new listener anywhere in the world, which can lead to a number of other revenue opportunities. 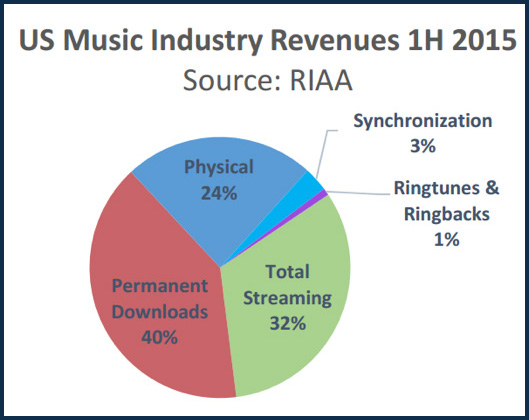 Before we move forward, it’s helpful to get a few lingo terms covered. Knowing what these mean will help you understand this new distribution medium.

In addition, if a listener has a paid subscription to Apple Music, Rhapsody or Spotify, their spins of your tunes generate a bit more coin for you than if your music is accessed on a free service. And streaming rates are heading up due to a recent change in streaming rates.

Freemium. The model used by Spotify and Pandora’s free tiers, where there is no charge to set up an account, but listeners hear ads between sets to help pay the cost to license the songs played. With Spotify’s mobile app, freemium listeners receive non-interactive playlists based on chosen preferences – desktop freemium users can use the service interactively.

Exclusive content. With a wide range of music streaming options, fans are faced with making a choice of which music streaming service they will use. Here’s where the services diverge in their approaches. Tidal, the upstart service now owned in part by Jay-Z and a handful of other top artists including Coldplay, Lil Wayne, Beyoncé and Alicia Keys, offers exclusive content from bands such as Daft Punk and the White Stripes as well as exclusive tickets to shows only available to subscribers to help differentiate their service. Apple Music is offering exclusive content as well, with Drake’s “Energy” video and Taylor Swift’s 1989 concert movie only available through their service.

Spotify has taken the opposite approach, basically offering their paid subscribers and freemium listeners access to the same music. As has been seen with Taylor Swift and other superstars, that has not gone down well, and as a result, talks are underway to adapt a savvy strategy used by the movie industry known as windowing.

Windowing. This strategy offers a major benefit to paying subscribers: access to the latest releases on the day they drop. Freemium listeners would not have access to the newest music, until a later date, likely somewhere between three months and a year later. It has worked well for the film industry for more than 30 years and it appears Spotify, the number one streaming service (in terms of paying subscribers), has started negotiations for a test run that would embrace a windowing strategy. If successful, this approach might possibly entice artists such as Taylor Swift, Adele, and Jason Aldean to offer a new release via streaming services.

Here’s a rundown of the major streaming providers and how they currently stack up in terms of number of users and the services they offer.

Spotify. The leading music streaming service, Spotify boasts over 75 million users in 58 countries. Their model offers an interactive user experience to paying subscribers (who number more than 20 million), and a non-interactive user experience to free users of their mobile app (desktop users get the interactive experience). In other words, paying users are allowed unlimited access to Spotify’s entire catalog of music across a variety of platforms, while free mobile app users are confined to a shuffled radio-like feature similar to Pandora. The service is responsible for creating much of the current buzz around music streaming, but has come under fire from both artists and record labels for their continued practice of making all music available to both paying and non-paying subscribers.

Pandora. The oldest of the bunch, Pandora has been around since 2000, and in its 15 years of existence has attracted roughly 250 million users, though only 78 million are considered active. Unlike Spotify, Pandora is not an interactive service, and users instead create stations based around a genre, artist, or song. Premium subscribers, who make up roughly 5% if their users, don’t have to listen to ads, and are allowed more song skips, though playback is still limited to the shuffled station format. Like Spotify, Pandora has been struggling to make a profit, though its recent acquisitions of terrestrial radio station KXZM, ticketing service Ticketfly, and streaming service Rdio, show that it will soon have more to offer.

Apple Music. The newest of the bunch, Apple Music was launched just this past July and already has 6.5 million subscribers in 100 countries around the globe. Though Steve Jobs famously denounced music subscriptions, Apple’s entry into the music streaming market shows that music streaming is not something to ignore. Its service is similar to Spotify’s, and paying users have interactive access to an unlimited amount of music of their choosing. Unlike Spotify and Pandora though, there is no free plan available.

Rhapsody. Rhapsody was one of the first music streaming services available, having been launched in 2001. Despite its long existence, it only recently has picked up in popularity and currently has nearly 3.5 million paying subscribers. It offers two levels of paid service: a Pandora-like radio service without advertisements called UnRadio, and a Premier service which is similar to Spotify and Apple Music. It also has no free tier.

Tidal. Tidal is an interesting player because it claims to be run by artists for artists. It was originally launched in October 2014, and was then bought out by Jay-Z last January. Growth has been slow for the company, and it recently celebrated its first million subscribers. It offers an interactive service similar to Spotify and Apple Music, and for a higher price also offers that same service in a higher quality lossless format to please audiophile streaming fans.

Google Play Music. Google Play Music started out as a digital music locker where users could upload their music and access it from anywhere. It then expanded to include a digital download store, and finally a full-fledged music streaming service in 2013. The music locker feature is still available for free, as is ad-supported radio, but a paid subscription is required for the interactive service a la Spotify and Tidal. Their user base is growing, though an exact number of users has not been released.

YouTube. Launched in 2006 and now owned by Google, YouTube is the third most visited website in the world with over 1 billion users. Though primarily a video content provider, it has become a music streaming service in its own right thanks to users uploading music videos, lyric videos, and cover performances. In fact, Nielsen market research shows that 64 percent of teenagers today use YouTube as their main source of music. Though it has otherwise remained free since its launch, Google recently launched YouTube Red, which offers enhanced services (including no ads and the ability to save videos offline) and includes a subscription to Google Play Music for $10 per month.

8Tracks. Taking a decidedly different approach to curation, 8Tracks does not offer an interactive experience like Spotify, nor does it offer algorithm-created radio stations like Pandora. Instead, it hosts a community of users who create and share their own playlists of music with one another. The experience is still non-interactive, but that’s almost part of the allure of each digital mixtape. The service is supported by advertising revenue, but they offer a paid subscription that removes advertisements. As of 2014, 8Tracks had over 11 million registered users.

Amazon Music Unlimited. Unlike Amazon’s Prime Music service, which gives users access to two million songs, AMU offers “tens of millions” of songs, closer to Spotify’s 30 million (these are, of course, all rough numbers). AMU lets you skip songs and offers the option of downloading tracks for offline listening. After a 30-day free trial, the AMU Echo plan is $3.99, but that requires you use the service on your Amazon Echo, Dot, or Tap. If don’t own one of these devices but are a Prime member, you can pay $7.99/month or $79/year fee (in addition to your annual Prime fees), or subscribe to the family plan and get up to six family members subscribed for $14.99/month or $149/year. If you don’t have a Prime membership, you can get an individual plan for $10 per month, the same price as Spotify and Apple Music.

Robert Bassett is a freelance engineer, producer and bassist living in Northern California. He teaches music while completing his degree in Music Management this spring.