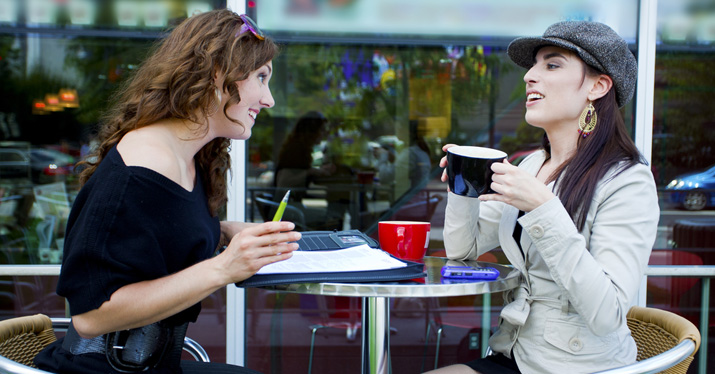 Getting press requests but not convinced you know how to give a great interview? These seven tips can help you prepare, focus, and deliver an interview that can impact your music career.

Press attention can make a significant difference in the career of nearly any independent artist. Whether it’s a feature article in a major music magazine, a band profile blurb on a local music blog, or anything in between, the right mention in the media can raise your cachet as an artist, draw new listeners to your music, and prime you for opportunities that you might never have imagined or expected.

If you’re at the point in your career where music journalists and bloggers want to interview you, it’s important to be prepared. If your hometown newspaper calls asking to speak with you for a piece about your latest release, or a guitar-focused website wants to talk about how you got that deep, searing tone on your latest single, how do you prep yourself to give the best interview possible?

As a long-time musician and music writer, I’ve conducted scores of interviews with other musicians, from young indie artists up to stars like Billy Joel, Justin Timberlake, and will.i.am. Here are some tips from my experiences — and those of a pair of music industry experts, as well — to help make sure that you give a great interview and get the kind of press that can make a positive difference in your career.

Know how you want to talk about your music

While interviewers can ask you all sorts of questions, you may notice several themes that will come up repeatedly. “Who are your influences?” “How did you come up with your sound?” “How would you describe your music?” Questions like these can get at the core of how you want to be seen and understood as an artist, so spend some time before the interview reflecting on such subjects.

If you’re not sure where to begin, start by checking out these previously posts from the Disc Makers blog:
How To Write a Killer Artist Bio
Sell your story, sell your music
Creating the perfect pitch
Branding Yourself in Your Artist Bio and Beyond

Whether you end up rewriting your artist bio or just jotting down notes about how you want to describe your approach to vocals, time spent crystalizing your thoughts prior to the interview will help you feel cool, calm, and collected when it comes time to verbalize answers on the fly with your interviewer.

Before you go one-on-one with your interviewer, ask some friends, fans, family members, or bandmates to throw questions at you in a mock-interview setting. After all, giving an interview is a sort of performance. Even if it’s a performance that’s going to involve lots of improvisation, as nearly any interview will, rehearsing ahead of time can help you get in the right headspace to do a great job.

Whether the questions your mock interviewers ask turn out to be serious or silly, insightful or irrelevant, simply the experience of having to talk about your music and career in a Q&A setting will help acclimate you, so you can better relax and have fun when it’s time for the real thing.

When you’re asked for an interview, make sure to spend a little time looking up the writer and some pieces that he or she has written in the past. That way, you can walk in with an idea of the sorts of questions you might be asked and the overall personality of the interviewer. But don’t stop there – take a little time to research the outlet in which your interview will be appearing.

“To me, giving an interview has lots of similarities with writing an article,” says Lloyd Sachs, who has decades of experience writing about music for Rolling Stone, Chicago Sun Times, DownBeat, Playboy, and many other outlets. “You have to know who your audience is and who you’re trying to project to with your answers.”

If you’re being interviewed for a magazine that appeals to songwriters, for example, it can be helpful to be ready to talk about your song structures or chord changes and voicings, whatever details might appeal the most to the magazine’s readership. If you’re speaking with a newspaper or general interest magazine or blog, Sachs continues, you might be better served by cutting back on technical jargon and instead describing, in general terms, what you’re trying to communicate through your music.

Keep the final readers of the article in mind as you’re giving your interview. “Don’t feel like your answers have to be geared only towards the interviewer who’s sitting in front of you,” says Sachs. “Aim your answers towards the people who are going to read the article once it’s written. Talk about things that you think will interest them as well.”

Try to do the interview in person

I’ve conducted interviews with musicians in person, on the phone, via Skype, through e-mail, and even once or twice through Facebook messenger. But regardless of the different ways technology allows interviewers and interviewees to connect, there’s nothing better than being in the same room as your collaborator – just like when you’re sitting down to jam.

“For me, in-person interviews are always the better option,” says Sachs. “There’s nothing like face-to-face contact. It just leads to a more natural conversation and connection. You learn more as a journalist and I think artists are generally more comfortable in those settings as well.”

If the interviewer presents you with the option, do your best to make the conversation happen at a coffee shop, park, studio, or anywhere where you can spend some relaxed time together talking about your music. One common solution is inviting the writer to come backstage at a show, and speaking with him or her before or after you play, whichever feels the most comfortable for you. Some of my most memorable interviews with artists have happened in green rooms, or at the bar of a club, before or after soundcheck.

Use technology if you need to

If you and your interviewer happen to an ocean apart from each other, a wonderful interview can still be had. If you’re planning a phone or Skype interview, for example, just make sure that you’ve planted yourself somewhere quiet; comfortable; and with good Wi-Fi, cell reception, or landline access.

Test out the connection before the call to make sure that everything sounds alright. I’ve had a small but notable number of interviews seriously hampered by a fuzzy and distorted cell phone connection on the interviewee’s end that turned the artist’s answers into unintelligible mush.

Similarly, avoid conducting an interview in a moving vehicle. There’s little more frustrating on a writer’s end than having a spontaneous, inspired, and articulate response to an interview question cut off in the middle due to driving through a bad service area.

If an interview has to happen via email, just do your best to write in a conversational, thorough, straightforward way, and realize that your answers may end up in print, or online, exactly as you write them (sometimes, typos and and misspellings included, unfortunately) — so be sure to proofread before hitting send. Whatever the case, send your responses back as quickly as you can and offer to immediately answer any follow-up questions that come up. It also never hurts to ask your interviewer ahead of time for details about how long your answers should be.

Have a conversation, not an interview

The coolest and most rewarding interviews I’ve conducted all have one thing in common — they’ve quickly diverged from a strict interviewer / interviewee dichotomy into a vibrant, music-based conversation between two people who just love music.

“Try not to sound like a politician — bland, politically correct, saying the same thing every time, and just repeating verbatim what’s written in your press release or bio,” advises Mike Wilpizeski, Vice President of Publicity for Concord Music Group. “It’s better to have a fresh answer, like you’re just talking about music with a friend.”

“Approach every question like it’s the first time you’ve ever heard it, even if you’ve been asked the same question dozens of times,” he says. “Even though you can be prepared and have your talking points, try to have something spontaneous and interesting to say as well.”

Any number of Sachs’ interviews have ended with him feeling that he’d sparked a friendship, and he reports having successfully followed up on a number of those budding positive relationships. “When you’re in a really good interview, you know it,” he says. “You feel a certain vibe and the specific questions become less of the issue. It’s all about the music and the conversation.”

The best way to cultivate such a vibe in your own interview? Relax, go in with positive energy and confidence, treat your interviewer with respect, and see where the conversation takes you.

While you don’t need to worry about every word that comes out of your mouth, do pay attention to the topics at hand and avoid touching on things that could hurt your career down the line.

“Don’t diss anybody when you’re being interviewed, especially your label, if you have one,” says Wilpizeski. “It might sound cool at the time, when you’re talking on the phone, to say something about your label, or another artist, but remember that, especially with the Internet, everything lives forever and there’s no right to have things you’ve said be forgotten. You say it, and someone writes it – it’s permanent.”

It’s never attractive when one artist rips on another, adds Sachs. “Even if it’s done on a thoughtful level, it costs the interviewee something when he or she tears down somebody else or criticizes their work.”

Wilpizeski also warns against saying things you wouldn’t want in print, even if you ask for those portions of the interview to be “off the record.” Even if the writer doesn’t write about the specific topic that you’re mentioning, your comments still make an impression and color how he or she writes about you; furthermore, Wilpizeski says, sometimes things that you say “off the record” end up in the article anyway.

The more relaxed and open you feel, the better your interview will turn out. Remember that it’s a privilege to have people ask you about your art, so dive in, geek out, and try to have a blast following the musical conversation wherever it leads.

Do you have any tips or stories related to giving great artist interviews? Leave them in the comments section below.

3 thoughts on “Talk the talk: How to give a great interview as an indie musician”