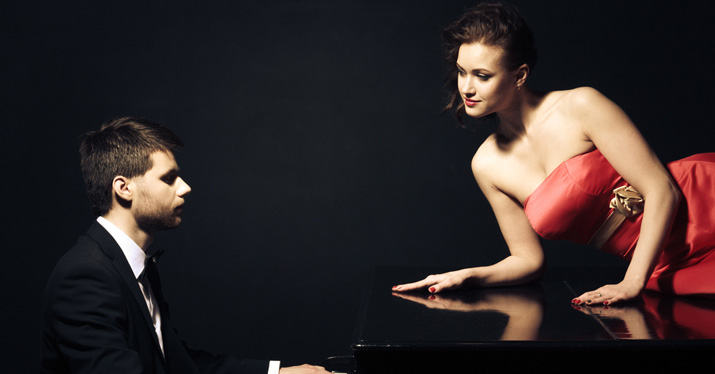 There are many benefits to collaborating with another musician, including creative growth, more press opportunities, and a chance for a whole lotta exposure.

Collaborating with another musician can produce great creative results. At the very least, working with someone new can take you out of your comfort zone, introduce you to new songwriting practices and ideas, and force you to up your game.

For unsigned and independent musicians, there’s another major advantage to collaborating with another artist: it can be an awesome boost of exposure. Strength is in numbers, as they say, and bringing someone new into your creative circle is a great way to expand your fan base and contacts and get your name out there.

You can tap into a new fan base

Since you first started taking music seriously, you’ve probably been steadily building up a fan base. The more you’ve gigged, the more self promotion you’ve done, the more people have become interested in your musical exploits. Depending on how far along your musical career you are, you may even have hardcore fans. The sort of people who buy every record and every piece of merchandise that you put out, come to every single one of your shows, and act as a promotional mouthpiece for your band to anyone who will listen.

If the person you’re collaborating with is worth their salt, then chances are they’ll also have built up a similar fan base. And, depending on how close in proximity they are to you and your local music scene, their fan base will be made up of people different from your own. By working with that artist, you have the opportunity to tap into their fan base. Your music gets exposed to new people; people who have a predisposition to like your music based on the positive association that you have with one of their favorite artists. Provided that the music you and your collaborator create together doesn’t suck, it’s hard to go wrong.

It’s not just fans that you can gain when collaborating with another musician, it’s also their network of useful contacts. As you pursue a career in music, you tend to make contact with people who can help you along your way – gig promoters, producers, sound people, merchandise manufacturers, bloggers, etc. As with fans, your collaborator will have likely done the same. And, now that you’re working together, their rolodex of contacts (and by rolodex I mean smartphone contacts list, ‘cause it’s not 1974) is available to you.

This is mutually beneficial to the both of you. If your collaborator is friends with a promoter in a region that you want to play, he can put in a good word for you. If your collaborator is looking for someone who does great deals on short-run CD production and you know a company, you can return the favor by passing on the details. If either of you is playing a local club looking for an act to complete the bill, you can put in a good word for the other. Or, if you’re appearing on the same bill, you can even get up on stage together to do a rendition of that sweet song you recorded together. There are many possibilities.

Being on friendly terms with someone who has connections means that you are also connected. And being connected with the right people is a sure fire way to get your band noticed.

You double your promotional effort

When it comes to getting exposure, one of the great things about working with a collaborator is that you double your promotional effort. Assuming you’re an unsigned or independent musician, you probably spend a lot of time promoting your music via social media, at gigs, or trying to persuade local press to give you coverage (more on that in a minute). So does your collaborator, and together, you can cover much more ground than you would on your own. That track or album is getting double the exposure on social media than a non-collaboration would have received. You’re both mentioning your latest collaboration at your respective gigs, so more people are becoming aware of your material than would normally. And, between you, you’ve got more contacts to local, independent press outlets, so you can get more exposure there as well. Speaking of getting your music featured in the press…

It makes for great press

As somebody who has spent the past few years working in music journalism, I can tell you that collaborations make for great press. First, they’re still relatively unusual. Collaborations between two established artists don’t happen every day. Even in a genre like hip-hop, where guest appearances and collaborations are far more common than in, say, rock, records credited to a single artist or band are still the norm. Consequently, when it emerges that [established artist A] is working with [established artist B], the press tends to be all over it. Second, two artists names in a headline is going to make more people click on the title, and for online publications, more clicks often means more money.

A great example of collaboration bringing in lots of press was Robert Plant and Alison Krauss’s Raising Sand album, released in 2007. The former Led Zeppelin singer and the renowned country chanteuse were afforded more attention for that release than either of their stand-alone solo albums had received in years. Krauss was exposed to an audience that wouldn’t normally seek out her music because Plant’s association meant the record was covered by the likes of Classic Rock magazine and news outlets. Similarly for Plant, who went on to carve out a successful niche in country and roots infused rock music following the collaboration that has defined the latter years of his career. Everybody won with Raising Sand, and both Plant and Krauss were given a career boost because of it.

This, of course, is a very high profile example, but the same principle works at a smaller, independent level as well. Even on your local scene, collaborations don’t happen every day. So when they do, they’re big news. If your local zine, blog, or newspaper is going to afford you more column inches because of your association with another artist, that’s more exposure for you.

Finally, the creative benefits are worthwhile too. Collaborating will allow for your music to grow since you now have to integrate another artist’s creativity with your own. By doing so properly, your sound can further evolve into new places which will also allow you to attract new potential fans.

Alec Plowman is a contributing writer for Soundudes, the intelligent solution for musicians to grow their audiences online. Soundudes’ unique targeting algorithm identifies and connects you with hundreds of real, new, and relevant fans on SoundCloud every month. Fans who will love and share your music – your potential superfans.

Related Posts
Ask a songwriter: 5 questions for Rachael Sage
How to split the music publishing pie
Expand your audience with opening act and support slots
A DIY Songwriting Workshop Idea
Songwriting: advice and insight on the craft of writing a song

7 thoughts on “Collaborating with another musician can boost your exposure”