When planning a music crowdfunding campaign, focus on getting more pledges from more people, enticing backers to pledge at higher amounts, and aiming to achieve your goals quickly. 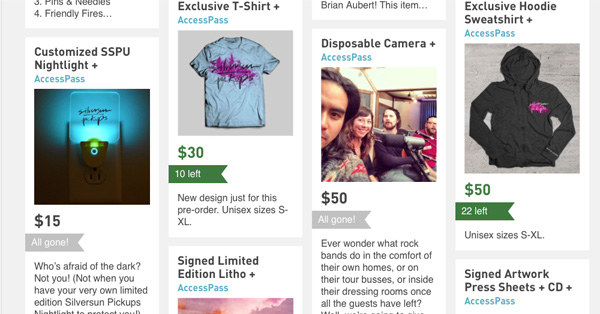 Over the past few months, we’ve written a few posts about music crowdfunding, a popular avenue for independent musicians to get a CD release or other creative projects paid for upfront. Whether you are trying to cover the cost of producing your next album or get a tour off the ground, crowdfunding gets your fans involved while generating the necessary dollars.

A truly successful music crowdfunding campaign can capture your current fans’ enthusiasm while also spreading the word to new eyes and ears, which can bring in even more money and build your fan base.

Following all the steps we outlined in “How to crowdfund your next project: 11 steps to success” will help you maximize your efforts, but today we want to dive into step #6: setting a mix of rewards to encourage backers to pledge the most amount of money to your project. Your approach should focus on getting more pledges from more people, enticing your backers to pledge at higher amounts, and aiming to achieve your goals (and stretch goals) quickly.

When setting your reward levels, make sure you avoid pitfalls that can discourage pledging or cause you to lose money. Beware, they aren’t always obvious! Do the following:

Set the right price. Don’t offer a reward that costs more than what your backer could reasonably find elsewhere. For example, a simple digital album reward should never cost more than what you’ll be charging for the digital download on iTunes or CD Baby.

Factor in the shipping costs! Don’t offer a reward for less than $25 if it requires shipping. If you do, the shipping and postage costs will eat your profit. Instead, offer digital-only rewards – MP3s, digital posters – for your lower price points.

The key price point where you can offer physical goods as rewards – a CD, a printed poster – is typically around $25-$30. But that reward should fit in a 6″x 10″ padded envelope and weigh less than three pounds. As reward limits grow, size and postage options can grow, but keep in mind, every dollar paid toward shipping is a dollar that’s not going to your project.

Keep small price gaps between rewards. Offer your backers many different pricing options and reward levels to choose from. Each backer is different, some want to support you but can’t afford to pledge a lot while others can afford more. Your goal is to provide multiple options so you can help people find the level they’re most comfortable pledging.

How do you get people to pledge more than just $5? What inspires donors to pledge higher amounts? The answer is in the types of rewards you offer and the pledge levels you set. Be creative. Offer a lot of special and limited-run rewards at ever-increasing levels, from as low as $1 to as high as $10,000 or more.

To get the most out of your pledges, set:

$1 rewards. Always set a $1 reward! This level hooks people who are only casually interested in your project. Once someone becomes a backer, crowdfunding platforms allow you to message them. With each update comes another opportunity to up-sell these backers to a higher reward. If you follow our advice from the “11 steps” columns, you’ll be communicating when you’re close to achieving each goal – not just the first goal, but the stretch goals as well. You might influence a backer to pull in other people to help the project succeed. For a good, low-barrier $1 reward, try offering an exclusive (unpublished) downloadable track or a handwritten PDF of your lyrics.

$10 rewards. A $10 reward is an excellent price point for a downloadable digital album. But don’t just offer the exact thing someone could by from CD Baby or other digital stores. Add something extra so it becomes a true reward, like an additional song, or a custom wallpaper for their computer.

$25 rewards. The $25 reward is the most common pledge point, so offer a variety of rewards at this level to capture numerous types of backers at this value. This is also the first level where you should consider non-digital rewards. But it’s a good idea to offer both a physical version and a digital equivalent so you can push the “save-the-earth” message. Non-physical rewards that don’t require shipping are better for the earth, and better for you!

Rewards greater than $25. Prepare a graduated set of rewards for values greater than $25 all the way through $500 or more. The types of rewards you can create are practically endless. Offer previous albums or rarities from your back catalog. Create various packaged rewards: different CD cases, vinyl, USB drives, etc. Offer a souvenir photo book of the “making of” your project. Offer to add funders’ names to a “thank you” page in the liner notes.

You can also let fans buy some control. For example, offer backers who pledge $100 or more a chance to vote for the album art (from a pre-selected array of finalists) or create a set list for a show in their city. Mix and match the rewards to create bundles at various price points.

Top rewards. Always include multiple high-level rewards – some fans really might donate at these levels, but not unless you ask. Also, psychologically, offering high-priced rewards makes the mid-level rewards appear more affordable. Personalization options are most appropriate for those who pledge the largest amounts. For example, you can offer backstage access, a day with the band, or a house concert. Think big, but don’t over commit yourself to something you can’t do.

Finally, don’t forget to look at other successful music crowdfunding campaigns, and use the best ideas for your own. Don’t be afraid to adjust the rewards during the campaign. Some fans might change funding levels as the campaign goes forward. Monitor progress and see what’s working. Note what your fans are choosing, or skipping, and make changes as you go. The right reward mix can not only get them to pledge in the first place, but also increase their support level as the campaign goes forward. The difference between campaigns that fail and those that succeed lie in choosing the right mix of rewards that entice backers to not only buy a part of your dream, but earn a reward that allows them to share in your success.

Read More
How to crowdfund your next project: 11 steps to success
Four ways you can fund your next music project
Planning your album: your CD release (and post-release)
Sell your story, sell your music
An independent musician needs to make CDs

One thought on “Planning the rewards for your music crowdfunding project”