Just as your creative endeavors demand a fresh and personal approach to ring true and be successful, there’s an art to finding ways to raise funds for your indie album release.

It’s all falling into place. You’ve got your songs, arrangements, musicians, and studio all set and ready to go; plans for CD replication, distribution, and publicity aren’t far behind. The only question? How to pay for it all.

Even if you barter, bargain, and DIY like a pro, the expenses of creating and launching an independent album can add up, and countless musicians have had to come up with creative business solutions in order to let their musical projects soar.

Here are just a few case studies, tips, and strategies from independent musicians on gathering the funds to make their own dreams of an indie album release a reality.

Go for the grant

Toni Jannotta has received multiple grants to help with her music projects, with her first grant-related victory helping to fund her latest jazz vocal CD, Is It Magic?. It all started thanks to public access television.

“When I was living in Ventura, California, I turned on CAPS-TV, our public access station, and saw a piece on winners of a grant from the city called the Cultural Affairs Commission Fellowship,” she says. “I’d never heard of it before, so I called the city and found out what they were talking about.” Jannotta went to an orientation related to the grant program, learned what the parameters were, and submitted an application, which led her to be selected to receive funding.

Grant applications can vary widely, Jannotta says — that first application was very simple, while the second was so thick and complicated that it resembled a longwinded legal document and required its own index. “It took me six weeks to compile,” she says of the latter, “but it was worth taking the time to fill it out. As an indie artist, at the end of the day, you have to be your own everything, including grant writer.

When it comes to writing grant applications themselves, Jannotta’s advice is simple: “They give you guidelines and then you follow them,” she says with a laugh. “There are narratives that must be written and I suggest speaking from the heart, as opposed to selling and saying that you’re the greatest thing since sliced bread and that your work is groundbreaking.”

Instead, she advises, talk about how much your project means to you and why, how it’s touched you personally and how you hope it will touch others. “Talk about how it might help and why it’s a good fit for the particular grant,” she continues. “Don’t try to be a PR person. Tell them what you have to offer and be honest. That’s what I’ve done every time I’ve had to apply.”

While finding the right grant, writing a killer application, and actually winning may seem daunting, Jannotta says it’s a road worth pursing. “From my experience, once you receive one grant, you get on the ‘grant superhighway’ and you start receiving information on all kinds of other funding sources, asking you to submit applications,” she says. “So if you get one, it opens the door for many others.”

Case in point, Jannotta’s second successful grant application came about as a result of a random email she received describing an Artist In The Community Partnership grant program sponsored by the Ventura County Arts Council and funded primarily by the James Irvine Foundation.

“That’s how I made my project ‘Voices of the Homeless,’” she says. “I put on a jazz concert where a quartet of improvisers backed up storytellers from the homeless community, and then I made a documentary out of the performances. For the live performance, I had my grant money,” she continues, “but when I decided I wanted to make the documentary, I went back to CAPS-TV because, by that time, the money was spent. Luckily, almost every city has a public access station.”

To find grants in your area like the ones that helped Jannotta, a great way to start is looking up local arts councils and inquiring about opportunities. Here’s an article I wrote for the National Endowment for the Arts on the subject.
http://arts.gov/NEARTS/2010v1-art-works-how-art-work/ground

Crowdsource with a chocolate twist 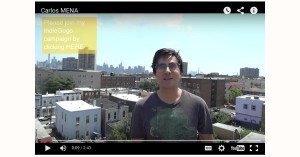 As of the writing of this article, Argentinian musician and producer Emilio D. Miler is in the midst of a crowd-funding campaign for Carlos Mena‘s indie album release, a New York-based artist who Miler has produced — and his efforts have taken him in an interesting and unexpected direction.

“Since Carlos is Ecuadorian, a while back, I suggested he get in touch with the Ecuadorian Consulate and Embassy, and he was able to get a distinction from the consulate as a Distinguished Personality of Ecuadorian Arts and Culture in the United States,” says Miler. “That in turn raised some eyebrows in his home country, as well as with his fellow musicians in New York who already knew him, but didn’t pay attention to the fact that he was from Ecuador. Also, it was a big deal for Ecuadorians to see that one of their own was in a scene as big and important as New York, and was making some noise and progress,” he continues. “For the last few years, he has been doing great work as a sideman, performing with a number of bigger-name artists in the jazz and Latin scenes.”

When brainstorming ways to raise funds for Mena’s debut solo album, Miler wanted to find a way to capitalize on the artist’s existing buzz, as well as his personal heritage. “We wanted to find something to make the campaign unique,” Miler says, “not just for the sake of uniqueness, but something that would fit his music and the fact that he came from Ecuador.”

Rather quickly, Mena and Miler came up with the theme of Ecuadorian chocolate. “It’s one of the flagship products of the country and has won many awards in the last few years,” Miler says. “So I made it my job to search for companies that sounded like they made chocolate in the same way that we made music — with passion, intention of growth, and awareness not only of where they come from, but who they want to reach. I wanted to find a company with a message, not just a product.”

Through his research, Miler located a company called Pacari, a small but growing business that exports chocolate to the United States. “I talked with the owners directly,” he says. “One of the key factors when trying to reach out to somebody outside of the music business is a natural, instant connection. I wanted to work with someone who just got what I was going for off the bat, and that was the case with Pacari.” As a result, Mena and Pacari began an official partnership, one through which the perks of Mena’s IndieGogo campaign include Pacari chocolates.

As the campaign is still in progress, time will tell how Miler’s ingenuity will pay off — but in the meantime, he sees pursuing such offbeat ideas as part of the gig. “When you’re going to produce music with an independent artist, sometimes you and the musician are as much of a team as you’re going to have,” he says. “The chores and responsibilities to make a project happen are essentially the same as with any project, but there are just fewer people doing them. You literally can’t afford to have the attitude of, ‘this is not my job.’ It’s the price you pay for being independent,” he continues, “but it’s a fair price for what you get in return, if you do your job right.”

If you decide to pursue creative partnerships outside the music industry, like Miler and Mena did, follow their lead and look for companies that have an organic connection with your music and identity as an artist as a whole — not just companies that have a lot of money. Also, Miler recommends, make sure that you can have persuasive materials and a detailed game plan to present once you receive initial interest; even if there is an immediate connection on the idea up front, multiple people within a company may need to give approval before any partnership is set into action.

Most of all, Miler recommends, look for a company that can be a true partner in your efforts. “It’s not just the funds,” he says. “It’s the attitude.”

Diversify – and go back to basics

Even if your crowd-sourcing and grant-writing efforts are pulling in substantial funds, or that wealthy uncle of yours agrees to cover all of your studio or musician costs in exchange for Executive Producer credit, it can always help to have a few other sources of production income on the side.

“Right now, I’m dog-sitting and house-sitting for some neighbors,” Jannotta says. “I’ve done it before and it’s not bad. I usually walk away with enough money to buy the illustrations I need for my next project. Next year, I’ll do some crowd-funding and, before that, work some of these extra jobs, in addition to gigs and my day job, to get the first few bits of my project together. That way, I’ll have something to show when I do dive into my crowdfunding campaign.”

Whether it’s setting aside a small amount of every paycheck from a regular day job or taking on some extra gigs, musical or otherwise, whenever your schedule allows, Jannotta has found that small and persistent savings can add up and make a difference when it comes time to pay for your album project. “It may not seem like a lot at the time that you’re doing the work, but every bit that you can put away towards your project can help,” she says.

What are some of the most unique ways you’ve raised money for an indie album release? Tell us in the comments below!

Read More
Home grown crowdfunding tips
Fan Funding – 9 steps to find patrons completely on your own
How to crowdfund your next project: 11 steps to success
Four ways you can fund your next music project
Fan Funding: Should You Ask Your Fans for Money?
Give fans more reasons to buy your music