Playing unconventional music venues can be a great way to expand your brand. Make those gigs a success through creative promotion, storytelling, and finding a unique narrative. 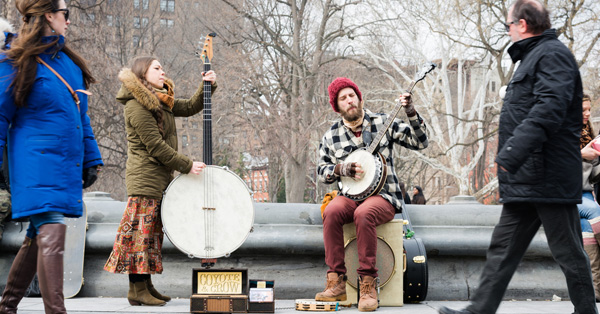 In “How to find and play unconventional music venues,” we published advice from Hillary McAndrew Plate, founder of Arts Consulting and Entertainment Strategies, on planning and booking gigs in unconventional venues. And while unusual performance spots can offer great opportunities to indie artists of all sorts, they also bring their own set of challenges.

“Never assume that the audience is just going to show up for you,” says Plate. “Unconventional venues require footwork on your end and you should see it more as an active partnership with the venue, rather than expecting wherever you’re playing to promote you to their followers or patrons and pack the house for you. Non-conventional venues generally have something else going on – if it’s an airport, they’re busy being an airport, or if it’s a museum, their time might be spent publicizing exhibits. So you generally will need to anticipate some involvement when it comes to spreading the word.”

This is not a hard and fast rule, as some of these venues might have excellent marketing people and large mailing lists of fans who are eager to hear what you can do. Just make sure to ask explicitly what outreach and marketing your venue can be expected to do on its own and be ready to fill in the gaps yourself when it comes to promotion. And even if the venue promises a widespread campaign, you should still spread the word through social media, posters, or whatever other strategies have worked for you in the past.

One strategy Plate advises is to examine the nature of the venue itself and weave it into the fabric of your promotion. “Whether you’re playing a house concert, which is its own niche these days, or some sort of underground club, try to build a whole story or angle around the unusual venue to help make it something really special, and use social media to spread the word.”

Are you performing at a graveyard on Halloween, or in a library on the birthday of a poet who inspires your songwriting? Are you planning on singing your anthem to resilience and perseverance at a hospital for wounded veterans? Whatever the venue, look for any creative way to create a narrative that turns your performance into an event – and not just another gig.

Plate further recommends that you approach every element of your unconventional gig with a sense of fun and experimentation. “As an artist, you can learn so much from unconventional shows,” she says. “You learn how to problem solve on the fly, how to make your whole act more portable, and how to adapt your performance and connect with your audience, no matter where you’re playing.”

Image by wayfarerlife via ShutterStock.com.

Read More
How to find and play unconventional music venues
Improve Your Live Music Show – Get Visually Creative!
Artist Booking Essentials: College concerts and the military market
Indie Touring Strategy: Getting Out on the Road
Tales of the worst music gigs ever
Owning the crowd: music performance tips from the “One Man Sideshow”