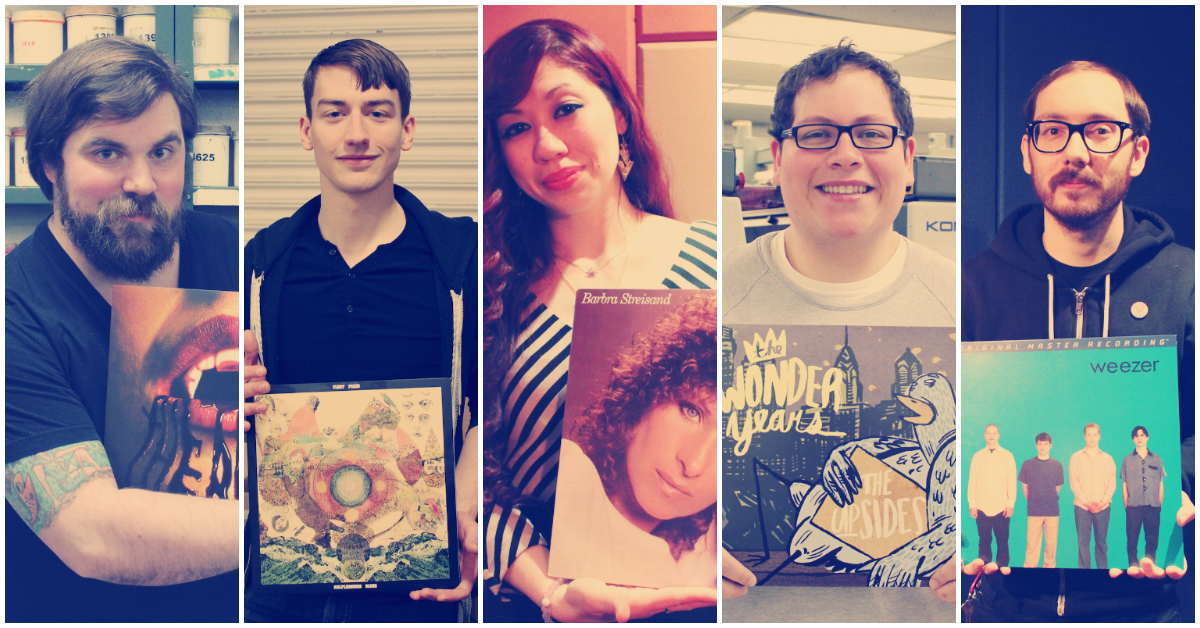 Join us all month as we celebrate Record Store Day and the importance of the independent record store!

National Record Store Day 2017 is on April 22nd, and Disc Makers is joining in to help celebrate the enduring importance and coolness of the independent record store. Vinyl plays an important role in our history–we started pressing vinyl records for Philadelphia R&B bands in the late ’40s, and we’re continuing that tradition as vinyl continues its surge into mainstream popularity and accessibility.

According to the Record Store Day website, RSD is a “day for the people who make up the world of the record store — the staff, the customers, and the artists — to come together and celebrate the unique culture of a record store and the special role these independently owned stores play in their communities.” Record Store Day is actually a global event, with special vinyl and CD releases made exclusively for release on this day. Special performances and promotional releases are also part of the celebration, and we’re joining in. We asked some Disc Makers employees to show off their favorite records and share why music and vinyl albums are so important to them. 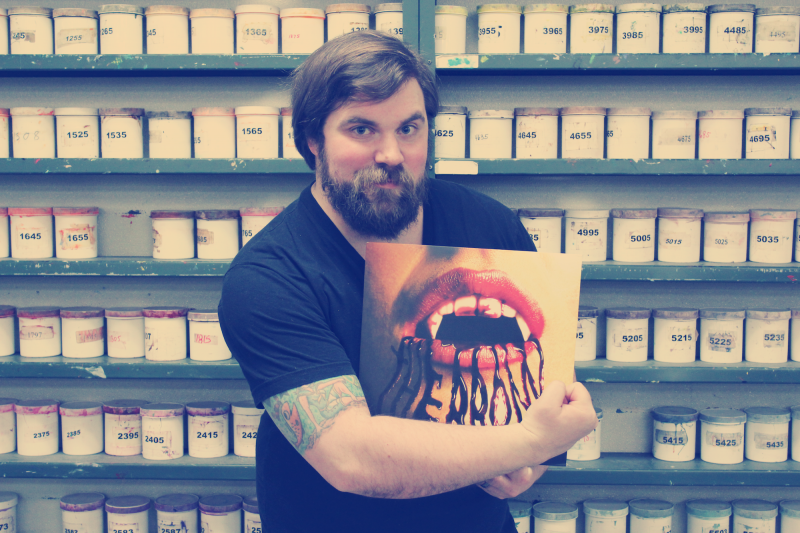 Which record did you choose and why is it significant to you?
The Bronx – Bronx I. This record is super important to me. It was one I was trying to find for years. Every time I would go to a record store, I would immediately go to the “B” section and look to see if they had it. I almost bought it on eBay a few times, but the price would always get real crazy. One 4th of July in Ocean City, NJ, I found it at Toilet Water and almost lost my mind. This record changed the way I play guitar and looked at songwriting. 10 songs in 28 minutes… it’s everything a hardcore record should be. This record is perfect…the album art, the liner notes, the songs, everything about it. 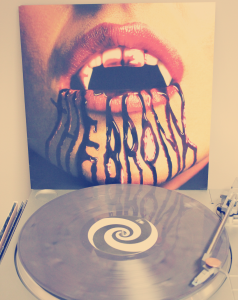 What is your earliest or most memorable music memory?
Most memorable would be seeing The Replacements in Chicago in 2013. Something I never thought I would have the chance to do.

What are your thoughts on the experience of physical music mediums?
I love having physical copies of records, vinyl especially. I have been collecting for about 15 years now. There is a lot of time and effort that goes into the sequencing of a record and when you put it on a turntable, you are listening to the record the way the band wanted. I think digital music is great, the fact that I can walk around with 20,000 songs on something smaller than a CD is amazing, but nothing beats the experience of listening to a record while holding the sleeve and liner notes, or finding a gem after spending a few hours at an independent music store.

What do record stores and Record Store Day mean to you?
Record stores are incredibly important to me. I have met a lot of friends from going to, and working at, record stores throughout my life. Record Store Day is great for the indie stores. There are lines wrapping around buildings and people really seem to have taken a shine to it. I waited for over an hour last year at my favorite spot in the city [Philadelphia, PA], Long in the Tooth. 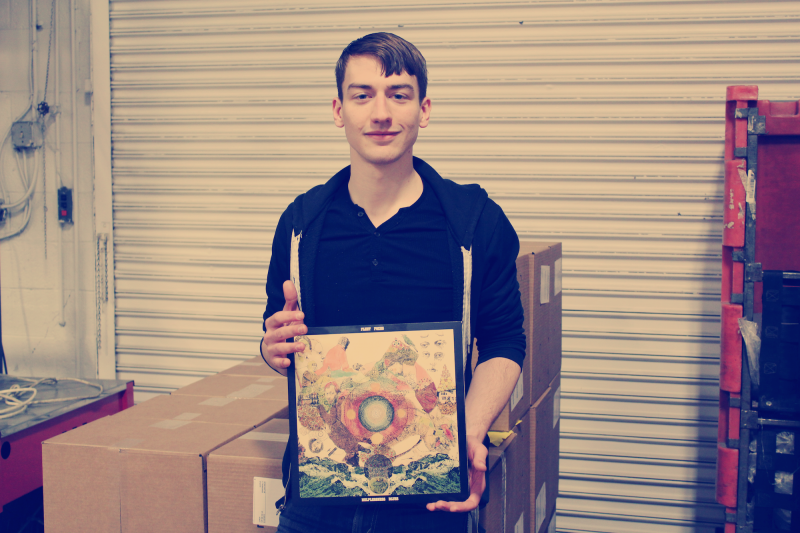 Which record did you choose and why is it significant to you?
I chose Fleet Foxes’ Helplessness Blues. For me, this album holds the honor of being the first vinyl record I ever bought; it was my introduction to an entire new facet of music and what it means to appreciate music. 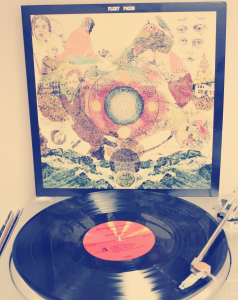 What is your earliest or most memorable music memory?
I vividly remember, when I was about 10 years old, I had a major “ah-ha!” moment – a bit of a musical epiphany. I had been given a burned CD of Jethro Tull’s 1977 album Songs From The Wood. However, whoever burned the disc had burned the entire album as a single 42-minute track. I wasn’t able to skip around and meander through the songs like I was used to doing. I believe this was the first time I listened to an entire album front-to-back, in one sitting. I discovered a new appreciation for the album as a whole composition, rather than a collection of individual pieces. I still get chills when I listen to some of those songs.

What are your thoughts on the experience of physical music mediums?
Having been raised in the age of digital music, my early experience with physical music mediums was treating them almost as an inconvenience. By the time I was 14 years old I had an MP3 player. Any CDs that I got were hastily copied to a hard drive and then placed on a shelf, never to be glanced at again. It wasn’t until I was older, maybe around 20, when I took the leap into the world of vinyl records. My music tastes had expanded quite a bit and I was trying to be more discerning with what music I consumed and how I consumed it. When I bought my first LP, Fleet Foxes’ Helplessness Blues, I remember sitting on my couch, staring at the cover artwork. The intricacies of the illustration seemed crisp and new, even though I had seen the artwork a hundred times on my computer screen. I opened the gatefold jacket and peered at the lyrics, penned in the frontman’s own handwriting. I remember how newly intimate the album seemed to be, even though I had heard it dozens of times before. There was just something different about the sound — it seemed “warmer”, for lack of a better term. I quickly realized why so many audiophiles are smitten with vinyl. Overall, I feel there’s a sense of sincerity that goes along with playing a record. The ritual involves a kind of commitment which isn’t present with CDs and MP3s. It commands a more attentive ear from the listener. It’s a more personal experience.

What do record stores mean to you? Record Store Day?
I find that there’s a sense of whimsy and wonder that goes along with indie record stores. If I pass by a record store, I can rarely resist the urge to pop in and pick around a bit, hoping to unearth some treasure from a dusty milk crate. All of these establishments are labors of love by the owners and the workers; these are people that truly love music. 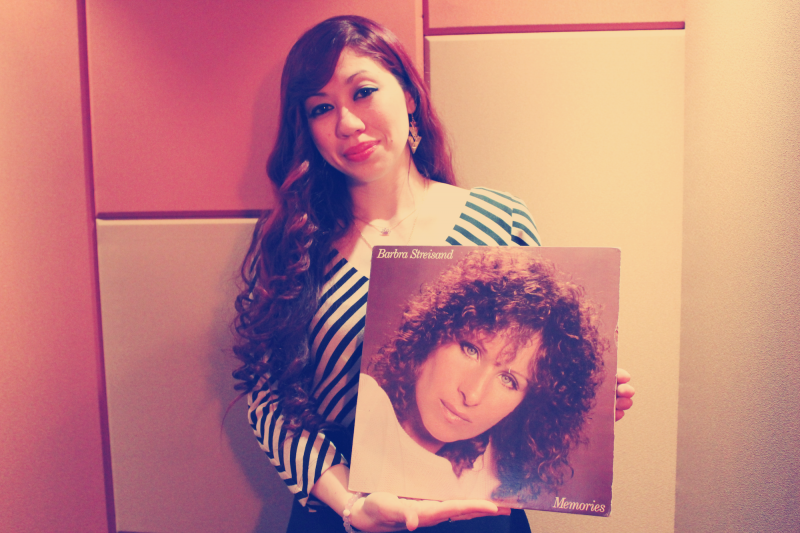 Which record did you choose and why is it significant to you?
I chose Barbra Streisand’s Memories as my record. It is significant to me because it gives me fun memories of my childhood. When I was 12 years old, one of my favorite cousins and I used to dress up and dance around while lip syncing to a song on the album called “Enough is Enough”, which is a duet between Barbara Streisand and Donna Summer. 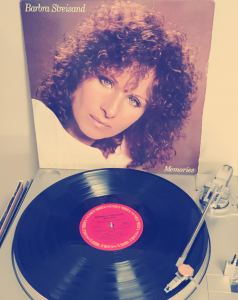 What do record stores mean to you? Record Store Day?
Record stores are very important to me, because it’s so nice to just be able to go to one of them and browse through all of the albums. You can discover artists that you’ve never heard of, and sometimes you come across that rare gem. Also, albums usually capture a specific time in our history, sometimes just reading through the album artwork on the jacket or sleeve has the capability of making you feel like you are in that time period. 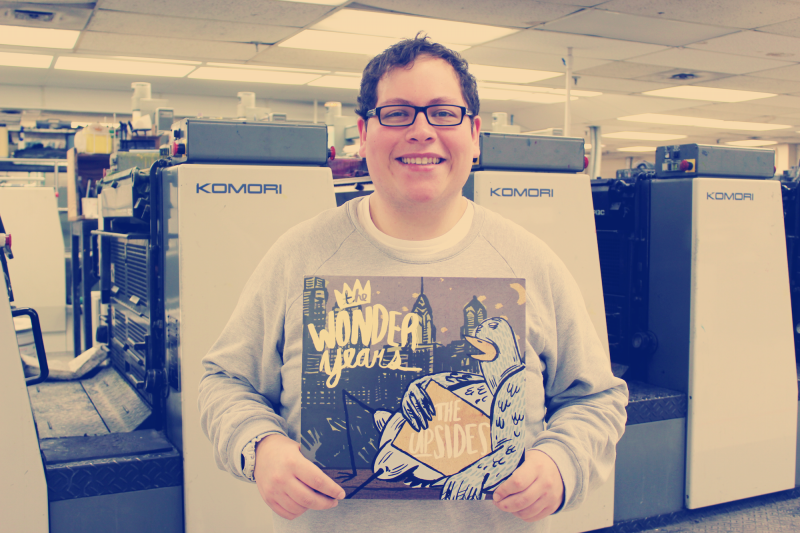 Which record did you choose and why is it significant to you?
The Upsides by The Wonder Years – This album means a lot to me because I’ve listened to it for the last 5 years and its helped me through some me through some low and high points in my life. It came out around the same time that I was a senior in college. It was a scary and crazy time in my life because I had no idea what was going to happen next and this album really touched on that fear of the unknown. With songs like “My Last Semester” it helped me cope – with lyrics like “I’m not sad anymore, I’m just tired of this place – The weight of the world be okay if it would pick a shoulder to lean on – So I could stand up straight.” Once I graduated and got a great job here at Disc Makers, I still found myself consistently turning to that album for inspiration, background music, and help. The intros in songs like “Hostels and Brothels” and “Washington Square Park” are so much fun and still get me so hyped up. As time has progressed, The Wonder Years have put out some great albums and they’ve blown up from this small local Philly band to one of the biggest pop punk acts out there. Whenever they come to Philly, I make sure to see them play. In fact, last month I saw them play four shows in one week. 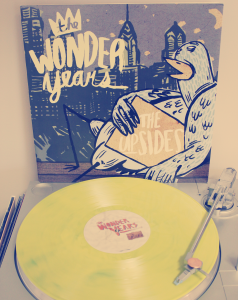 What is your earliest or most memorable music memory?
My earliest music memory was dancing in my grandmother’s living room to REM’s hit classic “Losing My Religion.” I loved that song because of the instrumentals and melodies, but I had no idea what it was about. I used to make my mom play that cassette over and over again just to hear that one song. It must have drove her crazy.

What are your thoughts on the experience of physical music mediums?
I couldn’t imagine going to a show and not seeing merch plastered all over the place. Whether it’s a small local show or a 7,000 person max capacity venue, there’s always going to be merch. From small bands doing a weekend tour in their state to major artists, physical music mediums create a connection between the bands and their fans. When I pick up a vinyl record in my collection, I instantly get teleported back to that show where I picked it up. Even though the digital age is upon us, music fans want that connection and bands love to give it to them.

What do record stores mean to you? Record Store Day?
Record Store Day is amazing and I look forward to it every year. It’s not only a day when some of my favorite bands drop limited edition vinyl, but it’s also a day when everyone gets together and bonds over a vital part of the music scene. I grew up with iPods which were amazing, but there’s nothing like putting on a record and listening to it in its entirety. When you get a group of people in the same room who feel the same way, it brings a sense of comfort that no matter what the future gives us, people still care about the craft, creativity, and overall originality that homemade independent music can bring you. 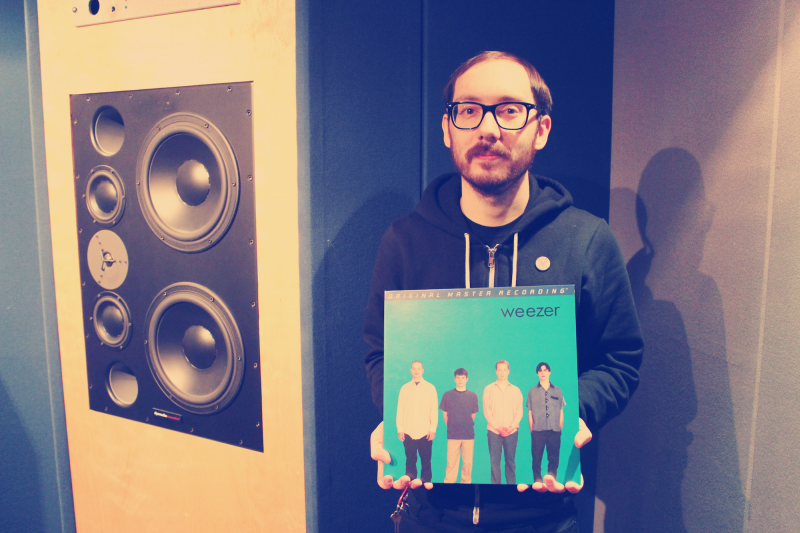 Which record did you choose and why is it significant to you?
I selected The Blue Album by Weezer. I chose this album because it is the first CD I ever bought and it inspired me to become a musician. Owning the album on vinyl now makes the listening experience even more fun. 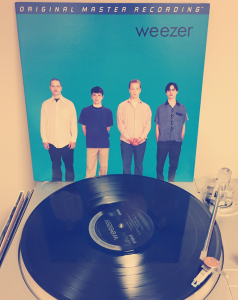 What is your earliest or most memorable music memory?
I remember seeing the music video for Weezer’s “Buddy Holly” and I thought it was one of the greatest videos I had ever seen. I still think that it is one of the catchiest songs ever written.

What do record stores mean to you? Record Store Day?
Record stores are a big part of my life. I worked in a record store for six years. I also spend a lot of my free time in record stores. I think it’s fun to possibly find something you were looking for or never expected to find.