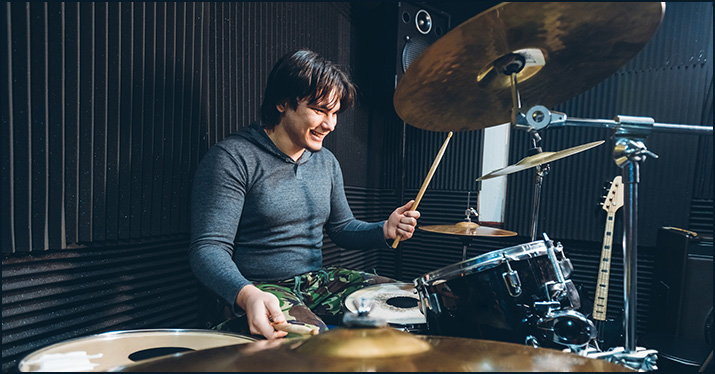 From kick drum compression techniques to EQing your snares, we’ve put together some tips for mixing drums that will help you get the most out of your recording.

You’ve tracked all your tunes, you’ve laid down the final harmony vocals, the last solo is in the can… it’s finally time to mix! Let’s start by taking a look at your mix and deciding which instrument to mix first. Drums are often a good place to start, but even if you begin with drums, always make sure that the vocal is present while mixing, so that the drums don’t ultimately overwhelm the vocal in a war of ever-increasing levels. It’s good practice to think of your vocal track in rock or pop music as your compass. As long as you understand that it’s typically the most important — and therefore should be the loudest — thing in your mix, you’ll find it easy to maintain the other instruments around the vocal in a way where everything is complemented.

Kick drum
Start by EQing your kick drum. There are usually a couple of trouble spots: Between 200 Hz—500 Hz (which can sound “tubby”), 600 Hz—1 kHz (“boxy”) and 2 kHz—4 kHz (“pointy” or “clicky”). There isn’t a hard and fast rule for this (or any of these for that matter), but these are frequencies worth examining first to see if you hear any issues.

Although you do want a solid low end, even a kick drum can have too much of a good thing. Using a high-pass filter to cut some low end rumble out of the kick drum, particularly below 30 Hz, can help clean up the overall bass sound of your mix.

Next, you might want to move on to kick drum compression. A gentle ratio can help tame the initial click and allow you to increase the overall volume, resulting in a louder, smoother kick drum. Since this is reducing the dynamic range, the net result is that quieter kick hits will sound louder, and the kick will become more even.

Snare and toms
Suggested EQ settings can vary wildly depending on the tone of the snare and toms you are mixing. For example, some snares have a fantastic round tone around 200—250 Hz, while other snare drums can sound very muddy in this range.

A lot is going to be determined by listening to your drum kit as a whole and hearing what needs to be emphasized or de-emphasized.

Oftentimes, the snap of the snare that sounds really great and crisp competes with the sibilance of the lead vocal around 3-5 kHz, which can cause problems. This is another good reason to leave your vocal track audible while working on your drums. Listening to the overtones of your snare as you EQ will help you determine what harmonics might be masking your lead vocal, and what EQ points will help emphasize the snare while staying out the vocal’s way.

As for compression, many of the same rules apply to the snare as they do to the way you might treat ambient drum microphones. As with the kick, you can tame the initial transient with some gentle compression to achieve a smoother sound.

Be careful not to over-compress the snare. A hyper-compressed snare can be much more lifeless and squashed sounding than a kick drum can.

Overheads/ambient drum microphones
When mixing drums, some engineers start with the overhead mics as they provide a picture of the entire drum kit. Depending on how many ambient mics you have — whether it be a mono or stereo overhead or multiple room mics — you can either use these mics to shape a bigger room sound or merely emphasize certain aspects (i.e. cymbals / hi-hats). Remember, because the sounds of rooms vary, the way the room mics will be EQ’d will also vary.

Drastic cuts to the low end on ambient mics can sometimes clean up rumble in the room tone, and tighten up drum sounds. Although this can sometimes sound very unnatural, it works in the context of the mix. Try it out!

With compression, the choices can range from subtle, for maintaining cymbals, to an extreme limiting ratio of 20:1 or higher for turning your drummer into John Bonham.

Using a de-esser on cymbals can help tame any harsh metallic tones if a cymbal sounds a little brash for the mix. While de-essers were originally designed for vocals, the de-esser works the same when used in suppressing high-frequency bursts from any instrument. Simply tune the ‘ess’ frequencies to the area of the frequency spectrum in which the cymbals sound particularly harsh, and set the threshold accordingly.

Using a mid/side EQ on your drum overheads to add some lift in the high end on the side channel, while adding more precise cuts and boosts centered around the kick and snare, can make a drum recording sound much wider, if that’s something that makes sense for your mix.

Percussion
This can be anything from shakers and tambourine, to congas and timpani, to electronic percussion and anything in between.

As these instruments vary in tone, and often take up smaller areas of the frequency spectrum, EQ adjustments are often drastic, in order to make the percussion fit into or cut through a mix.

Compressing percussion requires much higher ratios, as well as quicker attack and release times. Ratios between 5:1—8:1, though heavy, are recommended. When a percussion sound is too short, smoothing out the transient peaks allow us to hear the decay and character of the sound a little more clearly. You might use a release time as low as 20 ms.

Percussion can be used to add rhythmic excitement, but bear in mind that too much can distract the listener from the fundamental core of your mix. Use percussion sparingly. Consider turning the level way down during the verse, while always making sure to balance the panning so that you don’t have all of your percussion centered around just the left or right channels.

5 thoughts on “Mixing Drums: How to mix drums and percussion in your home studio”