A digital recording environment can make you lazy. Set boundaries – like a limited number of takes – focus your creativity, and make better recordings in the studio. 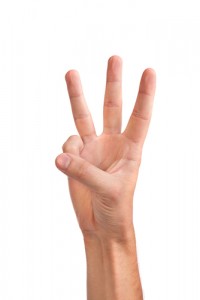 I have a rule that I live and die by in the studio. It helps me get more done, be more creative, have more fun, and make better recordings all at the same time. Are you ready for it?

Limit your options like your life depended on it!

Sound backwards? It is a bit. But it’s remarkably effective. Let me explain.

When it comes to recording in your home studio, there are seemingly limitless options of how to go about laying your tracks down. Whether it’s different recording techniques or mic placement options, you have a lot to sift through.

The art of recording is just that, an art. It isn’t just science, so there aren’t just one or two ways to get a great sound. In fact, you ought to spend a lot of time getting unique and great sounds.

So how does this rule of limiting your options work in this part of the process? It all starts with this revolution of recording we are living through: the hard drive era. We no longer have limitations of how much tape we have to record to. In fact, with the price of storage so low these days you could almost say we have unlimited space available to us. And you know what that leads to… unlimited takes!

The moment I was first introduced to computer-based recording, I saw the potential for recording millions of takes. At first it made sense to me to just record as much as you can and then pick the best takes later. But over the years I have come to realize how much of a hindrance this philosophy was, rather than a help.

I believe that having unlimited takes and hard drive space has made us lazy. We’ve lost that sense of urgency to try to perform our best in the studio and capture a great recording in a few takes. That was part of the magic of recording; it was a challenge to get that once-in-a-lifetime performance!

More importantly, having that feeling of pressure to produce (even slight pressure) created a sense of focus in the studio. Having limits and parameters tends to focus us. It makes us better and it helps you make better recordings! And that is how you should approach your home recording. Limit yourself.

You need to set up some pretend boundaries, some self-imposed limits to your recording process. One simple limit to set up is the number of takes you will record on any given part. For example, when recording lead vocals, give your singer a few warm up tries through the song but ultimately only record three takes. This should be plenty of material to comp together later if need be.

With drummers I tend to capture only two takes through a song once they are good and ready. That gives me a couple of options of fills if I need them, but not so many takes that it lengthens my editing process by a few hours that I don’t have.

The idea here is that you want your focus and creativity to be placed on the sounds going into your system, not how many versions you can get. You’re only creating more work for yourself later if you do this, plus you are reducing that sense of urgency I mentioned a moment ago, which will probably dilute your creative potency rather than spark it.

Get back to the basics

When it comes to recording, we all need to go back to the basics. Dozens of takes is not how you get a good recording.

Take a good musician, have him play a good song, on a good instrument, into a good microphone, with good mic placement, into a good audio interface and you’ll get a good recording. It’s that simple.

Use your ears, be creative, and have fun. But don’t trap yourself with the future burden of having to sift through too many takes. Be confident enough to get a good recording and move on.

Graham Cochrane is a Tampa, FL-based freelance mixing engineer and founder of one the web’s most loved audio recording and mixing blogs, The Recording Revolution, with over 200,000 readers each month. Follow him on Twitter @recordingrev. Get your free copy of Graham’s guide, The #1 Rule of Home Recording.

20 thoughts on “Limit your takes and make better recordings”