Excerpted from our newly revised Making a Great Master guide, this post highlights the pros and cons of digital vs. analog audio masters when preparing for CD manufacturing 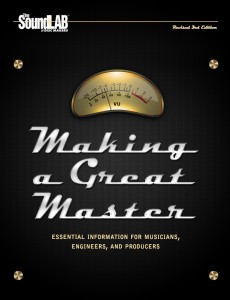 When deciding how to prepare and submit your audio master for CD manufacturing, there are several format options to choose from. A complete body of work on a CD-R, individual audio files such as WAV or AIFF (with any variety of bit-depths and sample rates), and DDP 2.0 file sets are the most popular formats. An analog reel to reel master or DAT (digital audio tape) also provides high quality, though used less frequently with the advent of newer digital options.

In the age of computer recording and DAWs, analog is less commonly used, though still regarded by many as the superior choice. In some cases, analog can produce the highest quality sound detectable by the human ear, but it suffers from generation losses and tape hiss. In most cases, digital recording offers sonic and economic advantages over analog.

An analog recording captures an entire sound wave, but it also adds all the idiosyncrasies of the medium, including tape hiss, phase errors, distortion, wow and flutter, and dropouts. Digital boasts a perfectly clean representation of sound, but some aficionados aren’t fully satisfied with the standard CD sampling rate and word length of 44.1 kHz/16 bit because it is actually an incomplete representation of the original sound wave.

A number of audio equipment manufacturers have addressed this concern by increasing the resolution of their professional systems, making the representation of the sound wave more complete. Some of these systems also support higher sample rates, up to 88.2 or 96 kHz, though the complex sample rate conversion required to go from 96 kHz to the 44.1 kHz required for CD release can introduce its own sonic artifacts.

How does all this affect you? If you decide to use an analog master, make sure you do all you can to eliminate all the problems that can be associated with analog. If you decide to use a digital master, record at the highest word length you can. If you are planning on recording at a high sample rate (88.2 or 96 kHz), keep in mind that if you are releasing your music on a CD, your music would have to be converted to the CD spec of 44.1 kHz, which would negate the effect of recording at 88.2 or 96 kHz.

Digital
Digital recording is achieved by transforming audio signals into the language of computers. Electrical impulses are translated into signals that are either on or off (in binary terms, 1 or 0), with nothing in between. The major advantage of digital sound recording is that there is no perceivable generation loss and no tape hiss. It is possible, in theory, to make a 100th-generation copy that is bit-for-bit indistinguishable from the original master.

Digital recording comes in a variety of formats, including tape-based recorders, stand-alone hard-disk recorders, and computer-hosted DAWs. For professional and home studio multi-track recording, DAWs are typically used. For professional stereo masters, audio files such as WAV or AIFF are frequently used, as are DDP 2.0 masters, though these are most often created by a professional mastering engineer. Audio CDs on CD-Rs are also still widely used.

In our experience at the SoundLab, the recordable CD (CD-R) is the most common digital format used. Studio workstations can generate master CD-Rs, and CD-Rs can also be made on standalone decks and computer-based DAWs equipped with recording software and CD drives. (The SoundLab uses CD-Rs for our Proof Positive Reference CDs for clients using our mastering services.)
[http://www.discmakers.com/soundlab/]

Analog recording had been the traditional method of storing signals on various media since Edison developed the cylinder phonograph in the late 1800s. The signal is continuous and variable (analog), just like natural sound. The stored signal correlates directly to the source captured by the microphone.

The two most common analog storage media are magnetic, usually tape; and mechanical, usually disks, such as vinyl records. While analog systems can create high-quality master recordings, the various media have some inherent flaws that can introduce variations in the recorded signal, thus altering the original to some degree. By contrast, digital chops up the signal into small pieces, assigns each a value, and stores the values numerically, making it immune to minor anomalies of the storage medium.

Each time an analog copy is made, the quality is degraded by a certain amount – some degree of distortion and noise (electronic circuit noise and tape hiss) are added to the program. By the time a consumer hears a top-quality, mass-produced program, it is at best a fifth-generation copy. Even starting with the very best program source, the final market product quality has deteriorated.

Get your free PDF and read lots more in the complete guide, Making A Great Master, Essential information for musicians, engineers, and producers (Revised Third Edition).

Read More
Is Your Project Ready For CD Manufacturing? A DIY Album Release Checklist
Planning your album: your CD release (and post-release)
ISRC, Gracenote, and CD-Text explained (and provided) here!
An independent musician needs to make CDs
Back in the vinyl records business after 15 years!

One thought on “Format options for your audio master”