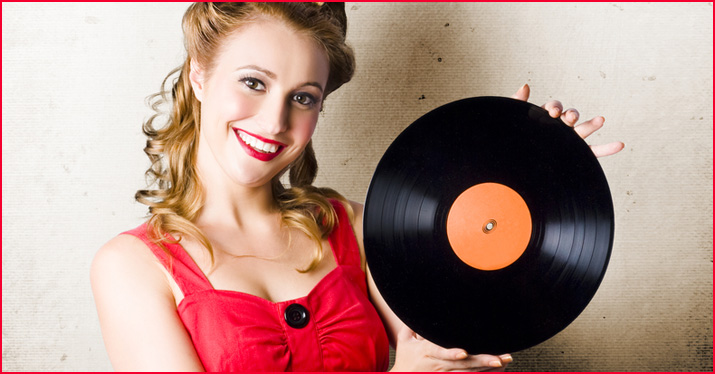 Is it the smell? The memories? The distinct audio quality? We weigh in on our fondness for vinyl records – join the conversation by adding your comments!

Here at Disc Makers, we’re all excited to see vinyl records come back onto the scene. As we’ve said before, it’s one of the more improbable stories in the music industry from the last decade, and while we sure do love CDs, there’s something almost magical about the return of vinyl. Do you feel the same way? Share your stories with us.

I’m not one for regrets or nostalgia, but when it comes to vinyl records, I’ll admit to having both. I regret selling 2/3 of my collection years ago, before my last move. It seemed like a good idea to lighten the load, but now as I sort through my collection (it’s still a good 200 LPs), I wish I hadn’t sold all those albums I grew up with. There’s something about holding that Boston LP and knowing it was the same disk I set on my turntable back in 1970-whatever. And it’s not so much nostalgia as it is an appreciation for the long-play record. I suppose the trend away from the LP started with CDs: not only can you easily skip tracks and pick singles to listen to, but artists take advantage of the extra time available and (too often) pack songs on a release that would never have made the cut on a two-sided vinyl record. And now, digital downloads have given way to the single being the end-all for an artist. Bah. I am and always was an album man. The body of 8-12 songs, the story they tell as a whole, whether an artist can hold an entire album together… that’s the mark of a good record. In the age of touching devices together to share playlists, I’m thrilled to see a resurgence in the art form that is the long-play record. Viva la vinyl! – Andre Calilhanna (Editorial Manager, Disc Makers)

In 1985, I walked down the street from my house to my local record shop (which is still alive and kicking!) and purchased my very first piece of music. It was a 12” single by Slick Rick: “La Di Da Di” on one side and “The Show” on the other. I listened to that record a million times over the years, and it still sits on my shelf today. – Jesse Gray (Director of Marketing, Disc Makers)

I learned to walk stabilizing myself on a huge console stereo – the ones with the lift-top that revealed a turntable, AM/FM, and reel-to-reel tape player – and as soon as I was allowed to drop the needle myself, I was playing my parents’ records. I’ve never been without a record player. My teenage years were spent listening to records on not-great-sounding bookshelf systems with turntables on top, and when I got a little older, I finally purchased my own standalone record player to plug into my component system. Now I’ve got three turntables in my house and they never get dusty. Vinyl is the only music medium that’s been around during my entire lifetime thus far, and I think it always will be. The whole experience of playing a record is just too good for it to go away. – Brad Bush (Marketing Manager, CD Baby)

It’s great to have vinyl back, isn’t it? I always loved the fact that vinyl LPs have two sides. There’s a special art to arranging a good track sequence. You need to think about how side one will end and how to kick off side two. It’s almost like breaking the program into two mini albums. – Mike Capaldi (Design Manager, Disc Makers)

Over six years ago, during my first job interview at Disc Makers (and whenever possible, since), I mentioned that Disc Makers needed to bring vinyl back. Needless to say, I’m excited to see this happen. The missus and I have a 2,500+ record collection that started back in my teen years with some second-hand Zappa, and it’s grown exponentially since – bordering on an obsession. Whether it is “forcing” the listener to experience the album as a cohesive unit, the experience and sound of playing an analog recording, or just the fact that the artwork is huge – there are many clear reasons why vinyl has been around for so long, and why it has been growing steadily for the past decade. Now to see that we’re bringing vinyl back – and on the same presses we used back when vinyl was king – what more could you ask for? – Mike Weakley (Project Manager, Disc Makers)

For me, vinyl is kind of like a time machine. As a kid. I experienced records passed on to me by my dad with nostalgia colored glasses, trying to experience that magic of rock and roll’s past by gripping the sleeve and studying liner notes laying face down on the floor, distraction-less. Fast forward to now and the idea of a world where we sit down and enjoy an entire album, front to back, without our minds wandering, seems impossible. Vinyl records are the last shred of hope for a medium competing for fleeting attention spans. I’m stoked to be able to buy my new favorite bands’ records on vinyl. It gives me hope that great music will never stop being created, or experienced, in full, not just as a throwaway single. – Dan Svizeny (Social Media Manager, Disc Makers)

Dan was interviewed in this piece for The New York Times in 2013 – read all about the “The New Audio Geeks” (New York Times).

Record Store Day is June 12th, 2021!
Record Store Day is a celebration of the enduring importance and coolness of the independent record store. According to the Record Store Day website, it’s a “day for the people who make up the world of the record store to come together and celebrate the special role independently owned stores play in their communities. Special vinyl and CD releases and various promotional products are made exclusively for the day and hundreds of artists across the globe make special appearances and performances.”

9 thoughts on “Why do you love vinyl records?”