Audio recording blends an adherence to rules and a knack of knowing when to throw ’em out the window. Mitch Easter’s recording tips trend toward the latter.

This “from the vault” interview clip is taken from The Golden Moment: Recording Secrets of the Pros, which features interviews with dozens of top recording engineers and producers sharing advice on how to get the most out of your recordings. 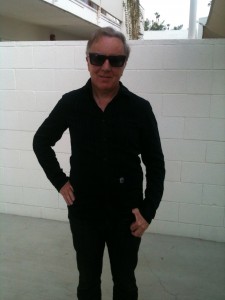 I interviewed Mitch a few years back at his studio, the Fidelitorium, just prior to his jaunt to Europe to produce a new record. He talked about his studio set up which is available for booking with him at the board or other engineers and also offered a few tips and observations on making records.

You’re known for using experimental recording techniques. Could you share some examples?

Well, I have sort of an irreverent attitude, so I’ve been inclined to do things that were supposed to be wrong. I recently did a record with a band called Motocaster. When I listened to their demo, the drums were amazingly punchy, right in your face. It turned out they had stuck an SM58 over the drum kit and then run it through a BOSS Compressor, one of these stomp boxes guitarists use! So I shamelessly copied their technique and added that to the usual hi-fi multi-mic setup. That added a fabulous rock ‘n roll smash to the drums. But I always like using cheap or ancient, wheezing gear along with the usual pro gear, because I really think the “action” sound comes from musically effective distortion. Sometimes this oddball gear makes a bold sonic statement you just can’t get any other way.

Any other favorite “deviant methods” you’d be willing to share?

The Mu-Tron Bi-Phase pedal. For my money, it still sounds better than almost any digital device on the market. I’ve used the fuzz box on the snare for effect. I like tape delays, for instance a [Roland] Space Echo, especially if the tape has a little crease in it. It’s cool because it has a certain randomness to it that digital delays don’t have. I love stuff like that.

Can you pass along any mic tips?

I love the Shure SM7 on electric guitar. It’s a lot flatter than a 57 with a solid middle. Plus, for tone control, I’ll use a second, different mic on the speaker box and experiment with its placement. Also, the Coles 4038, which sounds great on guitar and everything else. Another mic that I love is the EV RE2000. It’s a US-built solid-state condenser mic that sounds great on just about everything. It has a very smooth response with a built in heater to repel humidity; keeping the humidity consistent assures consistent frequency response.

What’s the layout of your studio?

The control room is downstairs. I have a few old keyboards in the downstairs hallway we use for overdubbing. We do basic tracks in four upstairs rooms. They’re like iso rooms that open up onto a large central hallway. Each musician can set up in their own room, although on the Velvet Crush sessions we’re doing now, everybody is in one room so we can avoid using headphones. We can move downstairs for overdubbing with the musicians who prefer to play in the control room.

The upstairs rooms have high ceilings and are pretty much square. I bought some tube traps and added some absorptive fiberglass panels to take care of the flutter problem, but the rooms are still slightly live. The hallway is very live, so it can be a pretty effective reverberant space. I can crack the door of a room and pick up the indirect sounds of an instrument with another mic to add some space to that track.

Spend time listening to records. It sounds obvious, but I always hear new things in old and new records that amaze me. The other night I was listening to “Penny Lane” by the Beatles. There are a couple of random snare hits that occur that sound totally different from the rest of the track. It’s a wonderful, unique randomness.

Another record that impressed me was the first Johnny Winter album [1969’s self-titled Johnny Winter], on Columbia. It has this big, shameless, thuddy sound. Today, you’d probably filter all that thuddiness out. But the record is still clear, it still grabs you. I’m fascinated by what made that record sound the way it does. All they had to work with was mic technique, a little compression, EQ, and tape delay. Yet the record is awesome. I think about those questions and try to apply some of what I hear to my own recordings.

I aspire to the greatness that those guys got in the 1970s! Records are so much drier (less reverb and echo) now. So I look at what I can do with compression and distortion. You know four different compressors have a switch marked 4:1, but each one of those compressors will have a completely different result on an instrument in a 4:1 setting. You have to really know what each tool will do, in order to make the best use of it in a session. Sometimes you actually can use a pumping sound (from a compressor/limiter) to make a track work better.

Read More
Creating a Home Recording Studio
Behind the Glass with Joe Chiccarelli
Quick tips for recording better tones in your home studio
Re-amping and Your Home Studio
Recording Tips For Producers, Engineers, and Musicians

One thought on “(Irreverent) Recording tips from Mitch Easter”