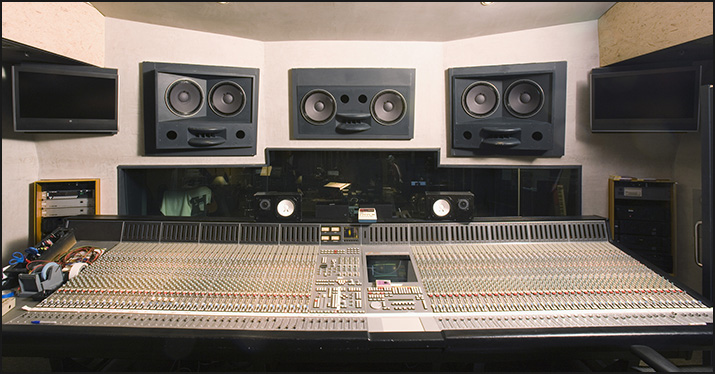 Mixing music is the craft of taking multiple audio tracks and combining them into a final master track. Combining tracks is equal parts art and science and involves utilizing a variety of tools to maximize the emotional impact of a song. Think of an audio mix as a sonic three-dimensional image. There are four essential elements we use to control that image:

Level
When we want to hear something louder, we turn up a fader. The louder components of the mix grab the listener’s attention more than the quieter components.

EQ (equalization)
EQ is really just a more detailed level control that lets us boost and cut levels at specific frequencies. EQ is the easiest way to shape the tracks in your audio mix so they fit together — and EQ provides a powerful way to add personality and character to the individual tracks.

Panning
If we think of Level and EQ as the “height” or “vertical” part of our mix equation, panning is the “width” or “horizontal” part. Panning a single audio element within a mix is the process of weighting the element more heavily in favor of either the left or right speaker.

Panning and your audio mix
Panning, in large part, determines how wide our mix ends up sounding to the listener. It can be used to create space in an audio mix, enhance existing space, and create a more immersive musical experience for the listener.

Figure 1: An example of narrow panning, with all tracks concentrated in the center of the mix.

In Fig. 1, the mix is panned very narrowly, and the stereo vectorscope tells us the listener will not hear much spatialization, or width.

Figure 2: An example of wide panning, with different tracks weighted differently across the stereo field.

In Fig. 2, the mix is panned very widely, and you can see the result: a much wider mix without any processing required beyond panning.

The principles of panning
How do we know what to pan, and where? A general rule in much of today’s popular music is that the backbeat and lead vocal are the focal points of the mix. Because of this, the kick, snare and lead vocal are usually panned center, often referred to as “C” or “0” by most DAWs. The other elements of the mix are what the mix engineer typically uses to create a stereo image of your song. Our ears tend to focus on the signals in a mix that are panned center or panned extreme left or right.

This doesn’t mean that the space in between center and left or right is to be ignored. Understanding the following approaches will help you determine what you want the listener to hear and experience by where you pan that particular instrument.

Mid-Side processing
Any discussion of panning and stereo imaging techniques would be incomplete without mentioning mid-side processing, so let’s take a look at that before we dive into the art of panning. 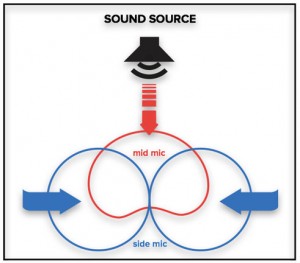 The concept of mid-side processing comes from a mic technique patented by Alan Bluemlein in 1934. The original idea was to recreate how a pair of human ears hears a stereo image. It came to be used effectively as a recording technique to enhance space before stereo playback existed. The basic setup includes one cardioid microphone (mid) and one bidirectional (figure of eight) microphone (sides).

Either during or after recording, the process includes copying the side mic signal and reversing the phase. This would leave you with two audio signals, one called “mid,” and the other “side.” In Figure 3, we have a stereo audio file. The left channel is the mid and the right channel is the side. 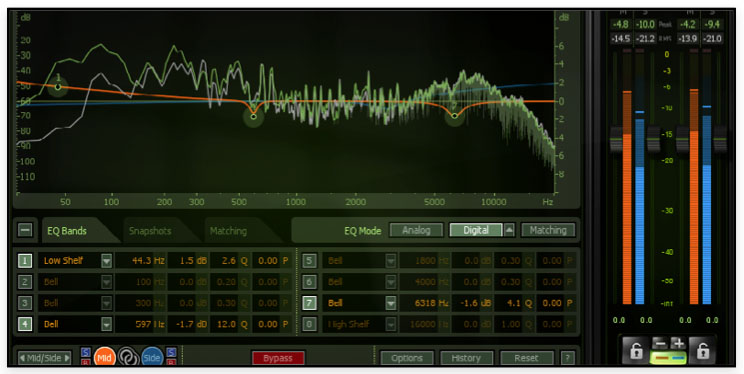 Listen to the mid microphone signal — you’ll hear a mono image. When you add the side signal, the stereo image changes. The louder the side channel is, the wider the audio is perceived. This is due to the phase correlation between the two mics. It’s an interesting sounding recording technique, particularly for capturing drums. But how is this used in the mixing process?

For instance, if you have a stereo drum bus, applying some high-end boost to the side channel makes the “wider” elements sound brighter. Also, adding some mid-range boost can add punch to a snare drum without muddying up your reverb, which is often more noticeable in the side channel.

The art of stereo imaging (panning)
Let’s step back for a second. Remember the idea here is that we’re creating an audio picture for our audience to experience. In some cases this will mean that, if you close your eyes and hear your mix, you can picture all of the musicians playing their instruments as if they were positioned on a stage. In other cases, it just means that you’re trying to create movement and excitement by having newer instruments pop up in your stereo field for the ear to focus on. There are no hard and fast rules for this, but there are some guidelines.

• If there are two instruments in your mix that occupy a similar frequency range, try panning them opposite one another. You don’t have to pan them to the extreme. For instance, a guitar panned slightly to the left will complement a keyboard panned slightly to the right. This will create a better balance throughout your mix, as the listener won’t perceive all the instruments to be coming at their ear from exactly the same position — which can be fatiguing and make it hard to know what the ear should focus on.

• Try keeping a narrower image across your whole mix during the verses of your songs and then widening that image by panning the elements that appear in the choruses further away from center. Having certain elements pop out like this, or even just move temporarily to a more extreme pan setting, will create excitement.

• Every once in a while, listen to your mix in mono to ensure you aren’t losing too much in the translation. It’s possible to spend a long time panning everything, only to go too far and realize your mix sounded more impactful before you even began!

• If you’re mixing any form of electronic music that’s likely to be played back in a club setting, bear in mind that most playback systems are mono. Having identical audio signals panned both to the left and the right can cause phase cancellation when the mix is collapsed to mono, particularly in the low end. You should still mix a nice-sounding wide mix, but keep checking to make sure you aren’t losing anything when the mix is collapsed to mono.

• Every once in a while, listen to your mix in headphones to make sure it doesn’t sound too disjointed or off balance. Your monitor speakers might be excellent, but since headphones lack the crosstalk (audio information from the right speaker reaching the left ear and vice versa), the experience can sound different. Remember, much of your audience might be listening to music in headphones!

• Make sure that the elements you pan don’t make the left or right side too rhythmically busy. For example, when mixing two instruments that occupy a similar higher-end frequency range, such as an acoustic guitar and a hi-hat, you can pan each instrument opposite sides. Since these two instruments are usually playing a similar rhythm (8th or 16th notes), keeping them opposite of each other maintains a similar timbre and rhythmic feel in both speakers. Panning a lot of rhythmic elements to one side could be quite distracting.

• With that said, sometimes older recordings, or modern recordings mixed with nostalgic or vintage methods, might pan the drums almost all the way to the right and the bass opposite on the left. Doing this will require more effort and attention on the part of the listener, but it can result in interesting textures.

• When recording acoustic guitars (or anything plucked or strummed), “double-tracking” (recording the same part twice), and panning one recording extreme left, and the other extreme right can create a much fuller sounding mix without overloading the instrumentation of the arrangement.

• Panning a snare dead center can immediately make it sound punchier, panning it slightly to one side might cause the listener to focus slightly more on the lead vocal or kick drum, and so on.

2 thoughts on “Panning adds width to your audio mix”