Here’s a roundup of news items related to music sales, music discovery, and crowdfunding from around the web

Trying to quantify the benefits of streaming services as an independent artist can be difficult, and exposure vs. revenue is certainly part of the equation you need to consider. For cellist Zoë Keating, known for her use of technology and a DIY approach to her career, the numbers are pretty clear. According to a recent post on The Strad, Keating’s 60,000 music sales accounted for 92 percent of her income, while her 400,000 Spotify streams and 2 million YouTube views added up to a fraction of her income.

Digital and physical music sales from iTunes, Amazon, and Bandcamp earned Keating $75,341, while her streaming and video plays, though 40 times the volume, earned her a combined $3,012. According to The Strad, “Of more frustration for Keating is the lack of demographic information provided by streaming platforms for artists. ‘Spotify knows exactly where my key avid listeners are,’ she said. ‘If only they would release that information — if that data was built into the service for artists — then the service would be of real value.’”

Radio is the #1 place for music discovery

While we’re taking a shot at streaming services, it’s worth noting that, according to information posted on Statista.com, Americans are most likely to discover new music via terrestrial radio. That’s right, AM/FM radio accounts for 35 percent of music discovery with another 21 percent polled saying recommendations from friends and family are their source for new music. Internet and streaming services pale in comparison.

This chart from Statista tells the rest of the story. 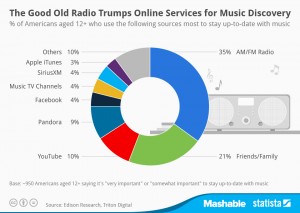 Watch what you say when looking for crowdfunding money

One last bit of advice when it comes to money and your music career comes from a new report titled “The Language that Gets People to Give: Phrases that Predict Success on Kickstarter.” As outlined in a post on Digital Music News, successful crowdfunding campaigns generally have language that fits into six categories:

1) Reciprocity: the tendency to return a favor after receiving one. “Everyone who has pledged $xx [or more] will get…; we’ll mention your name in the sleeve of our full length album (which you’ll get the download code for)…”

2) Scarcity: people attach more value to products and opportunities which are rare, distinct, limited in supply, or are available for a limited time. “This custom color option is exclusive to kickstarter and will not be available at product launch!”

3) Social proof: people depend on others for cues on how to act. “We’ve hit the 50% mark! Huge thanks to everyone who has pledged so far. It is truly inspiring!”

4) Social identity: an individual’s knowledge that he belongs to a social group, in which individuals have common attributes and identify themselves in similar ways. “A large portion of our community has come together to build this project.”

5) Liking: people are more likely to comply with a person or product if they like them. Positive remarks about another person’s attitudes and performance increases liking. “With your help, this project will be a success, and you’ll be able to enjoy our movie at a festival near you!”