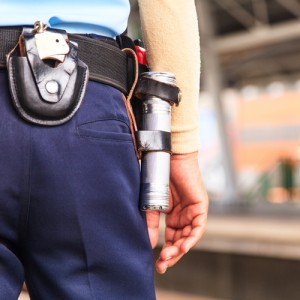 In “Tips from a cop to help prevent music instrument theft,” deputy sheriff Jerry Cress gives advice about how preparation and prevention is the first defense against theft. In this post, he focuses on what to do to recover your stolen music gear.

Don’t be a hero

First and foremost, do not go searching through the premises on your own. The suspects may still be in the house. Leave the area and report it as soon as you are in a safe location. If you’re on the road, you need to call the authorities where the theft occurred. If you wait until you get home, you’re too late. Jurisdiction goes to the agency where the incident happened, not where you are from.

Don’t touch anything! It’s a crime scene. Police can’t process a scene you’ve walked through and touched everything: it’s called scene contamination. If someone breaks into your house, wait outside for the police and they will walk through with you. If it’s your car, van, trailer, etc., don’t touch it.

Keep in mind that not every agency will process the scene for fingerprints or other evidence. It depends on the agency’s policy and capabilities. We’re not all CSI like on TV. Small agencies may not have the capability to process a burglary scene.

Arm the cops with details

Have the information needed. Obviously they will need your name, address, social security number, phone number, etc. Write out a list of everything that was taken, including:
– Make
– Model
– Color
– Serial numbers
– Value (how much you paid for it)
– Where you bought it from.

It helps to have all this information written down, or at least to know where the information is, before there’s a theft or a problem. (That’s why you have a GearTrack account!)

A legal note: In Ohio, a theft with a value less than $1,000 is considered a misdemeanor, anything over $1,000 is a felony (this refers the total value of all the items taken). This will make a difference if the investigation results in the finding of a suspect and how he or she is prosecuted. That’s why you need to inventory EVERYTHING you have. This may vary state to state.

Why serial numbers are so important

There is a national database of all stolen items. That database is available to all law enforcement agencies in the United States, and foreign agencies in some instances. When an item is reported stolen, the information is entered into the database, but if there is no serial number, the item cannot be put into the database. If an item is recovered or is part of an investigation, a search of the database can determine if that item has been reported stolen, even if the item was stolen in another state.

Here’s a simplified example. Let’s say I’m on patrol, and I observe a vehicle speeding. I pull the vehicle over. While talking to the driver I observe several guitars and musical equipment in the back seat. I ask the driver what kind of guitars he has, and he doesn’t know. I ask some more questions and determine that something fishy is going on and run the serial numbers of the guitars and find they match those as having been stolen in Michigan. This is what we call a “hit.”

Through the database, I can get the information of the stolen music gear and determine the reporting agency. A call to the agency can put me in touch with the investigator who is handling the report, and we go from there. Eventually, we get the guitar back to the owner and hopefully get a conviction.

Show respect to the officer(s). We understand you’re stressed out because you’re the victim of a theft, but that doesn’t give you the right to yell, curse, and be jerks to us. We’re there to help, and we want you to get your stuff back, but we can only do so much at that time. Like I said, not every agency will dust for fingerprints, look for DNA evidence, and process the scene like you see on TV. Some will just get the information and leave.

Also remember that very few officers know a lot about musical instruments and equipment. Try to keep explanations simple. Telling the officer about your Gibson Les Paul Special, with sunburst finish, EMG active pickups, Floyd Rose tremolo, and Grover tuners would be the same as me explaining the mathematical formula of determining crush as relevant to speed in a crash to you. Just a Gibson Les Paul electric guitar, serial #12345, will be fine.

Hopefully you’re never in the situation of having stolen music gear, but if you are, be assured that law enforcement will do everything we can to get your stuff back, and the more help you can provide, the better.

Jerry Cress has been a Sheriff’s Deputy with the Allen County Sheriff’s Office in Lima, Ohio for over 10 years, where he is assigned to road patrol and is a Crime Scene Investigator. He currently plays in the band Blame It On Shorty,” which plays throughout Northwest Ohio. Check out their Facebook page.

GearTrack is an online registry that aims to deter music instrument theft and aid in recovery. Instrument owners can itemize their collections and victims of theft can send stolen alerts to the WatchDog network and access tools for search and recovery. Buyers and sellers can easily search serial numbers before trading and selling their gear. Learn more and register your instruments at Gear-Track.com.

Tips for Surviving and Thriving on Tour

Indie Touring Posts – How to Be a DIY Tour Pro

5 secrets of the successful indie artist

Your elevator pitch should start a conversation