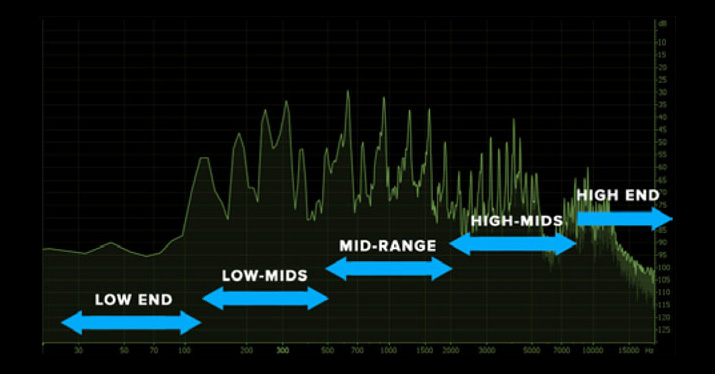 If you think of your audio mix as a three-dimensional sonic image, its four basic elements are level (height), EQ (height), panning (width), and time-based effects (depth)

Mixing music is the craft of taking multiple audio tracks and combining them together onto a final master track – be it a 2-channel stereo master, or 6+ channels in the case of surround mixing. The way we combine tracks is equal parts art and science, and involves utilizing a variety of tools to bring out the most emotional impact from the song.

Think of an audio mix as a sonic three-dimensional image. There are four essential elements that we use to control that image:

Level seems pretty simple – when we want to hear something louder, we turn up a fader. The louder components of the mix grab the listener’s attention more than the quieter components.

EQ (equalization) is really just a more detailed level control that lets us boost and cut levels at specific frequencies. EQ is the easiest way to shape the tracks in your audio mix so they fit together – and EQ provides a powerful way to add personality and character to the individual tracks.

If you were to think of level and EQ as the vertical (up/down) elements, panning would be the horizontal (left/right) element. Panning can be very helpful on instruments that sit in the same frequency range. By panning one to the left and the other to the right, you can separate the two instruments and reduce the chance of one instrument masking the other, and making it harder to hear.

The elements discussed above allow us to create a three-dimensional image, but there’s also a fourth dimension available to us – time. Time is the key way that music differs from static art forms like paintings and sculptures. You can stare at the Mona Lisa all day long and she’ll never change – she’s had that wry smile on her face hundreds of years. Conversely, a song can change within 30 seconds of listening to it and can go through multiple changes throughout the length of the song.

Utilizing the four elements we have control over and changing them throughout a song’s structure can result in a vibrant and dynamic mix. Mixing involves a fair amount of slight of hand – you’re deciding what instruments the listener is focusing on and you can change their focus within the mix at any point. A good example of this is going from a vocal melody to another instrument soloing. You’ve now seamlessly taken the attention of the listener from the vocal to the solo.

We use equalization primarily to shape the tracks in our mix to fit well together. A mix engineer might, for example, reduce the low frequencies of a bass guitar to allow the kick drum to cut through the mix a little more clearly. But EQ can also enhance individual tracks, perhaps by boosting certain frequencies that make a snare sound punchy (150Hz–300Hz), or a voice sound airy (15kHz–18kHz).

There are many different types of equalizers, and they all perform boosts and cuts in specific frequency ranges. The frequency range can be divided into several bands, such as a low band, a high band, and so on. This allows for unique adjustments to be made in certain areas. Equalizers usually consist of several bands: each band of an EQ is a single filter.

To understand the basics of how equalizers work, we will first discuss the parameters in detail.

Parametric equalizers provide the greatest level of control for each band. The instantly recognizable ‘bell’ shape is the most commonly used of all EQ types, allowing independent control of the three most common variables: amplitude, center frequency and bandwidth.

Figure 1 shows the equalizer in iZotope’s Alloy 2, but the principles apply for most parametric EQs. One band has been selected and has been dragged down to cut the frequencies centered around 185Hz by -2.7dB.

Each band of a parametric EQ typically has three controls:

While these are the controls for a parametric EQ’s bell filter, there are other types of EQ filters that are useful when mixing.

This is a “one-sided” filter. By choosing a center frequency, we are attenuating (turning down) all frequencies below (high-pass filter) or above (low-pass filter) that frequency. You can determine how steeply the frequencies are attenuated by adjusting the slope setting, which is often configured in multiples of 6db per octave, such as 6dB, 12dB, 18dB, 24dB, 48dB etc. In Figure 3, we are using a high-pass filter with a Q/slope of 48dB to remove rumble.

Low/High Shelf: These EQ types are also “one-sided” and are called shelves because they resemble a shelf on a graph. This manifests sonically as well. A shelving EQ levels off for an overall cut or boost, whereas a bell shape is for more precise adjustments. The gain (boost/cut) affects all of the frequencies below our center frequency (low shelf) or above our center frequency (high shelf). In Figure 4, a high shelf is adding 1.7dB of boost around a center frequency of 2378Hz. Note how it “shelves off’ above the center frequency, adding a high-end boost of 3.3dB.

Before we begin EQing, we should understand the frequencies we are about to adjust. Frequencies are measured in ‘Hertz’, or ‘Hz.’ This can be easily understood as the number of cycles per second of any given wave. A 200Hz tone has 200 cycles per second, which ultimately provides us with a recognizable pitch.

Human hearing is commonly understood to perceive a range from as low as 20Hz to as high as 20kHz (20,000Hz). We refer to this range as the frequency spectrum.

Different instruments within a mix tend to be focused in different areas of the frequency spectrum.

How do we know where each instrument lies? We can certainly use our ears and our eyes, but let’s break this range down into five specific ranges using common terminology.

The art of EQ

Every instrument has a fundamental (lowest) frequency for each note that it plays. Try to listen and learn the basic frequency ranges for each instrument you’re working with. Knowing this can help inform when and where you cut and boost.

Knowing where the fundamentals and harmonics (frequencies that are a multiple of the fundamental, i.e. a 100Hz fundamental has harmonics of 200Hz, 400Hz, etc.) are for each instrument can help eliminate some guesswork you may be doing while EQing tracks in your mix. To illustrate, let’s use the example of trying to create space for a lead vocal when you feel something is crowding it.

Try adjusting the EQ of other instruments with a similar frequency footprint as the vocal (piano, guitar, snare, etc.). If that doesn’t work, it has to be something else. Maybe it’s the kick drum? A typical kick drum can have a fundamental frequency of 80-100Hz and have a harmonic near the vocal register. If this is the case, removing EQ from the kick drum between 2-3kHz can make the vocal sit loud and clear atop the mix. If changing the obvious culprits doesn’t fix the problem, investigate further to find the issue. A quality mix is worth the effort.

The relationship between a kick drum and a bass guitar is paramount to maintaining a solid and strong low end. Listen for the fundamental on each and do your best to not overload any particular frequency on both. If a kick drum’s fundamental is 90Hz and the bass’s fundamental is 50Hz use those frequencies as a guide for separating the two instruments while still maintaining a solid low end. One way to achieve this is to “wrap” one instrument around the other. For example, find the fundamental frequency of the bass, then notch that frequency out of the kick. Then, boost the frequencies above and below that (if needed).

If your mix feels muddy, try reducing frequencies between 125Hz and 500Hz. If certain instruments – such as heavy electric guitars, piano, and certain keys and pads – feel as though they are carrying too much weight in the mix, start with those instruments.

Too much between 500Hz and 1kHz can sound woody or boxy and give a false sense of power in a mix. Instruments such as acoustic guitar, hand percussion, and electric pianos have a wide midrange tend to fall into this category.

Watch your step with 2kHz and above. This is an area where a little EQ can help a lot, but a little too much can make a mix sound brash or tinny. A lot of instruments have a tackiness between 4-8 kHz, but this range also adds some snap to the attack of instruments. Be aware of how much or how little work you’re doing in this range; you want to make sure your mix stands up to repeated listening without feeling too harsh.

Realize that our ears adjust to EQ changes very quickly and can be easily convinced a change is a positive one purely because it sounds different, so remember to reference back to the original sound of the instrument if you feel like you’re straying too far from the desired effect. The bypass button can be your greatest ally.

Remember that cutting can be just as effective as boosting – and oftentimes even more effective. Cutting certain frequencies allows the surrounding frequencies to feel more prominent, and has the added benefit of assuring there are no overloaded frequency ranges.

Try using a high-pass filter (HPF) on every instrument except for kick and bass. In a lot of cases
this will create more clarity in the low end. The reason for this is a lot of instruments (such as vocals) have little to no useful information in this range, and other instruments (electric guitars for example) may have low end added through EQ on an amplifier.

If you’re listening and feel that you hear the low end to be crowded, try soloing the drums, bass, and vocal. Set the HPF to 60Hz, and slowly move the frequency higher. As soon as you feel you’re losing valuable tone from the instrument, bring the HPF back to where it sits best in relation to the track. If you do this for all instruments other than kick and bass you’ll feel a more solid low end. You’ll also notice you’re not missing the low end on the other instruments.