Here are nine tips to help increase the chances you’ll get a top-notch live music mix for your next performance, direct from a soundman 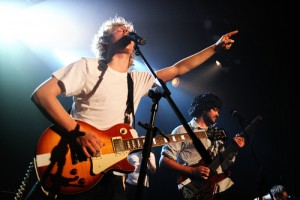 Whether you’re performing music gigs in clubs or theaters, at festivals or showcases, the person sitting behind the mixing board can play a tremendous role in crafting the polished, powerful sound that you and your audience need. Many indie artists don’t have the budget to travel with their own dedicated audio engineers and multi-speaker rigs, so it’s essential to work constructively with the soundman on site to ensure you get a great live music mix.

Regardless of who your engineer may be on any given gig, there are tangible steps you can take to streamline the collaboration, give him or her adequate time and space to do a great job with your music, and maximize your chances of getting a top-notch live music mix for your music performance.

Communicate your input needs ahead of time

Knowing exactly how many inputs you need and how many are available at a given venue can help avoid delays and confusion when you’re onstage preparing to perform. New York City sound engineer James Coyle advises that, “Many venues have information on things like inputs posted online, or in a one-sheet. Make sure to ask for those specs ahead of time, since showing up with eight inputs for six spots on the mixing board is not a good situation for anyone.”

Coyle recalls a recent situation where, minutes before the downbeat, he discovered that the number of instrument outputs required by a band exceeded the number of inputs his mixing board could accommodate. “If they had planned ahead of time, it would have been much easier. Instead of wasting time getting everything set up and finding ways to deal with those extra two inputs, I could have been fine-tuning their mix and getting them to sound that much better.”

Use instruments with pickups when possible

A mic’d acoustic guitar, for example, could pick up other loud instruments, audience chatter, or the house mix through the PA, causing unwanted noise or feedback, while the chances of feeding back with a pickup-equipped axe are much lower. Plus, if the guitarist moves around a lot while playing, his or her mic’d sound can be inconsistent, making things harder for the engineer.

“Musicians can’t always afford pickups, since they can be expensive,” Coyle says. “Other times, musicians are just used to playing unplugged, so I understand when pickups aren’t an option, and miking is perfectly fine in a lot of situations. We work with mics when we have to — but having instruments with pickups can definitely make my job easier.”

Manage tech-heavy set-ups ahead of time

Laptops, backing tracks, and multiple synths can add power and nuance to your set — but if not managed properly, they can also make the soundman’s job, and your live music mix, a nightmare.

“If you’re using a laptop, bring your own cables and adapters,” says Coyle. “Don’t just show up with a mini-plug output and expect the engineer to make everything work. I’ve had problems where people show up unprepared and I have to scramble to figure out how to get the cable to plug into a PA or amp. That leaves less time for me to dial in a good mix.”

Making sure your computer can output audio in a standard format like 1/4” or XLR will usually do the trick, and if you’re unsure of what standard the house mixer requires, be prepared with converters to accommodate both.

Connectivity issues aside, when done right, high-tech performances can make for a great experience — not just for the band and audience, but for the sound technician as well. As long as a band’s technical homework is done ahead of time, working with laptops and digital components can make a sound engineer’s job simpler.

“I worked recently with a band called the Lloyd Dobler Effect,” says Dave Loop, a production manager and sound engineer based in Maryland. “They had all sorts of crazy stuff — click tracks, backing music tracks, in-ear monitors, submixers for their keyboards, and a fifty-foot snake.” Despite the complexity, the band’s tech components were well organized and fit right in. “They had everything set up where their snake plugged into our system perfectly. They were managing most of the complexity from their side, telling us exactly how to plug everything in, and not running random wires all over the place. It made things much easier than they could have been. As a result, the music sounded great.”

Get the musicians – and video crews – on the same page

One major hiccup that Loop sees far too often comes not from the bands, but from video crews that accompany them. “The band can show up early and be great to work with, but sometimes video teams can cause a lot of conflict by coming last minute, claiming space meant for paid customers without asking permission, and demanding stereo feeds directly from the board minutes before the band is supposed to go on,” he says.

Needless to say, such conflict can negatively impact the soundman’s ability to get you a good live music mix, so best to stop trouble before it starts. If you’re bringing any sort of video crew — or plan on making any sort of audio recording — make sure that everyone communicates and arrives at the prescribed time before the show.

To further avoid stress and distractions for your sound technician, everyone in the band should also know how to access the performance space before a live show. “A lot of times, I ask musicians who haven’t been to our venue to stop by and let me show you how to get in to the building,” says Loop. “It’s simple once you know how to do it, but I’ve had bands show up with ten people coming from ten different entrances, which can be a problem when I’m trying to get everybody set up and dialed in. I always send out emails with that information, but it doesn’t seem to get read half the time.”

An organized soundcheck can give both band members and sound engineers the tools they need to craft an outstanding performance for the crowd, while a chaotic one can suck up valuable minutes — and good will — on both ends.

“Some bands do sound checks like complete pros — they know exactly what they want to hear in their monitors, make sure everyone is quiet except for the person giving sounds at any given time, know what order they like to go in for sound check, listen and communicate with me, and give hand signals for ‘more of this, less of that,’” says Loop. “Others are just a mess. Everybody’s on stage playing at the same time, nobody’s listening to what I’m trying to say, and there’s lots of noise and yelling. The more organized your band is, the more time you save and the better you’ll sound in performance.”

Control your levels as directed

“When a sound person asks you to turn down, turn down!” says Coyle. “More often than not when I ask musicians to do that, they either ignore me, or they seem to get even louder. Musicians should remember that, if the sound person asks you to reduce your volume, there’s a reason for it, and it’s not an insult. In no way am I trying to take away from your music, performance, or artistry.”

Everyone benefits from a level of trust between band and sound person, especially a house sound engineer who knows the room better than any band playing for a single night possibly could. “The engineer may not know the music as well as the band, but he or she certainly knows how to manipulate sound within the space to make any material sound as good as it can,” Coyle says.

Be mindful of instrument and mic placement

Some of this is basic, but well worth repeating — if you’re a singer who likes roaming the stage, keep your vocal mic a reasonable distance from any monitors or house speakers to avoid painful spikes of ear-crunching feedback.

Equally important is staying aware of where on stage your instruments are at all times. “We had a problem with an autoharp the other day,” says Coyle. “After one song, I noticed that suddenly the bass became way too loud and I had no idea how it suddenly got so hot. It took me a minute, but I figured out it was because the performer had put her autoharp on top of the bass amp, and the pickup was picking up the bass, so the sound wasn’t just coming from the bass amp, but through the PA, too. That sort of thing can really mess with a band’s sound balance and an engineer’s ability to make a mix sound good. Be careful where you put your instruments!”

Though it isn’t explicitly a sound issue, being aware of your song and set length can give your engineer one less distraction to deal with — and keep you from being rudely cut off just as your set is peaking.

“Many times, artists will have more material than time, which is great for the artist, but if things get busy and they’re really into a performance, there might not be an opportunity for me to give them a one- or two-song warning,” says Coyle. “I never like to just cut off a band without a heads up and, thankfully, I rarely have to. I’ve worked with many artists who must rehearse with a timer — at forty or forty-five minutes, boom, they’re done — and it’s really helpful when artists take care of that aspect themselves.”

Even after the last note fades, your job as a performer isn’t over — and neither is your sound engineer’s.

“A lot of times after shows, we see friends and audience members jump on stage and start talking to the musicians,” says Loop. “That really makes things hard for the sound engineer who might be trying to pack up for the evening or get set for the next act.”

Make sure that your entire group knows to politely ask that fans and friends keep their distance until band members can greet them in more neutral territory. Otherwise, problems can occur. “It’s a liability for the venue if someone is on stage from the audience and gets hurt,” says Loop. “It also makes breakdown much tougher for the engineer.”

Learn More
Here are some other perspectives on what to do, and avoid, when working with live sound engineers: