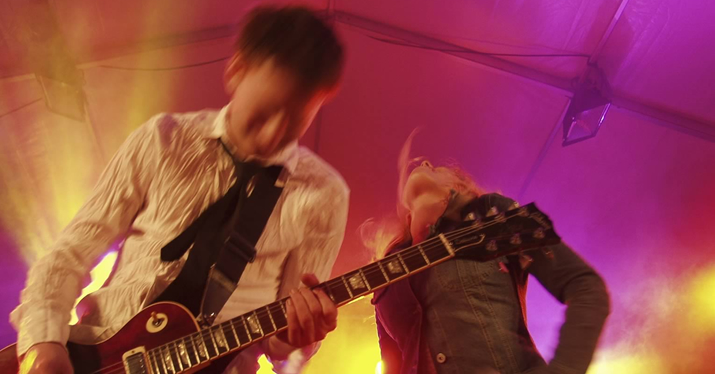 A well-crafted artist bio is a necessary part of your press kit and can increase the chances of your music getting heard by music journalists and visitors to your website.

As creative and expressive musical artists, we’d like to believe our music speaks for itself. It does, of course, but a well-crafted artist bio is still a necessary part of your press kit and promotional efforts. In addition to giving the reader a glimpse into your musical career/journey/accomplishments to date, an engagingly written band bio can increase the chances of your music getting heard, whether you’re approaching music journalists for press coverage, creating an electronic press kit, or just trying to draw in casual visitors to your website.

It’s no easy task to create a song that speaks to a wide audience and carries your unique fingerprint – and crafting a compelling and accessible artist bio can prove just as daunting. To help shed light on how to create a stellar band bio, I sought advice from Cary Baker, founder of the Los Angeles music publicity firm Conqueroo. Prior to starting Conqueroo, Baker served as VP of Publicity for Capitol Records, I.R.S. Records, and other labels – and before that, he worked as a music journalist for publications like Billboard, Mix, and Creem.

While artist bios can be written in any number of styles and configurations, Baker recommends a specific approach that has worked for him for decades. “We don’t really have bios or press releases anymore,” he says. “We have a uni-document. It’s a bio, but it’s a press release as well. It tells all about the artist’s background, but it also has a headline and a subhead that share the latest news.”

Bio length generally doesn’t matter much to Baker, as long as it tells the core, compelling story of the artist. “Sometimes we shorten bios when we send out paper versions with CDs,” he says. “Online, we don’t care how long a bio runs. We just want the uni-document to be a complete, thorough source of information.”

Baker tells his bio writers to start by describing the artist’s new album, or whatever the most current and exciting project may be. “It doesn’t matter that the band started in Chicago in 1984,” he says. “It matters that they have a new album coming out on such and such date, with this distribution and that label support, and this is why the project is important. So talk about the new album for a couple paragraphs to get people excited about it.”

A third of the way through, Baker advises, delve into the artist’s history. “This is where you say the band started in Chicago in 1984, recorded a second album two years later, won a Grammy in 1996, and work your way back to the present chronologically. Then discuss the current project again briefly at the end.”

“It’s a bit of a formula, granted,” he continues. “We’re open to variations, as long as the writer understands the basics of how we like to see a bio flow.”

Whether they come directly from the artist or from a blog post or newspaper article, quotes bring a bio to life and give it a unique feel and flavor. “If you have any pertinent quotes from media publications saying how great the album is, include those,” says Baker.

Though it’s not a hard and fast rule, Baker also likes to use quotes to bookend Conqueroo’s artist bios. “A good quote from the artist up front can establish a point of view and get people excited about the album,” says Baker. “I also like to end a bio with a quippy quote about the current project.”

Write for journalists and the public

When you’re putting a bio together, remember that you are creating a piece of writing for a varied audience, says Baker. “Bios aren’t just tools for journalists. They’re usually published on artist websites as well, so write and edit with both sectors in mind.” Furthermore, you never know who is going to see what – a blogger can easily post a bio meant for press for all the public to see online, and a journalist could peruse a band’s public page while trying to decide if they’re worthy of coverage.

In practical terms, writing for both audiences means making sure that your prose is catchy and engaging enough to grab the attention of a potential fan surfing to your site – as well as deep and thorough enough to give a journalist what he or she needs to become an instant expert on you and your music. Easier said than done? No doubt – but an important balance to keep in mind.

Know what to avoid

“When I was working as the head of publicity at Capitol Records, the president of the company commanded that we use no hyperbole in written materials,” says Baker. “So if I see anything like ‘unique,’ ‘best yet,’ or other needless superlatives, it’s gone. Let reviewers be the ones to include superlatives.”

One exception Baker notes is if such language is included in a quote from the artist him or herself, or if it truly supports an important theme or story for the subject of the bio.

Baker further advises to avoid clichés, wherever they pop up in your bio writing. “It’s easy to fall back on them when you’re tired, under a deadline, or just not paying attention to the craft of writing,” he says. “But stay away from them for sure.”

As a long-time music journalist myself, I’ve received countless press packages containing bios that didn’t grab my attention one bit. Why? They were too vague. A statement like “Artist X has recorded a career-defining album, meshing genres into a sound all his own,” tells me literally nothing. Much more intriguing, vivid, and informative, is something like “Artist X has recorded the first all-kazoo album of his career, combining speed metal and Zydeco influences into a pummeling sound that has rocked the San Fernando Valley.”

A simple test is to ask yourself, with each phrase, could this describe any number of artists, or only the music that I’m writing about? The closer to the latter you can come on a consistent basis, the more compelling your artist bio will be.

Just like mixing, mastering, arranging horn parts, or any number of musical tasks, writing a strong bio is a specialized skill. If you find yourself more comfortable penning thoughtful lyrics rather than crafting engaging PR copy, it may be time to enlist the help of a professional writer.

Baker puts it bluntly: “Most artists should not write their own bio. Bio writing is a skill that recording artists – even articulate ones – don’t automatically have. I’ve gotten some of the worst crap I’ve ever read from artists who write their own, and then I have to communicate to them that I can’t use what he or she wrote. It’s just not the tool I needed. My company has four employees, and one is a dedicated editorial director. She doesn’t write much copy herself, but she goes over every stitch of print that we put out to make sure it’s clear and that it abides by the principles I’ve already discussed.”

To find a good bio writer, research is key. Check out artist bios on websites and when you find one that resonates with you, try contacting someone on their team to find out who the writer was. “Call upon a journalist in a local paper,” advises Baker. “Just make sure it’s not somebody who is going to run into a conflict of interest later if the opportunity to write about you comes up.” Other options include contacting musicology professors at local colleges or hitting up trade publications for recommendations.

When it comes to payment, Baker says that the going rate for a professional bio writer is $300-$500. “If you’re an indie band funding your project on KickStarter, you’ll pay less of course,” he says. “If you’re Sony/BMG or Interscope, perhaps writers will charge a bit more.”

While such a figure may seem steep, and you can likely find a reliable source to craft yours for less, it’s a good indicator of how important a quality bio can be. In many cases, your artist bio will be the first exposure a journalist or potential fan will have to you or your band – and a strong bio can prime the reader to engage with your music. Just like quality audio mastering or graphic design, a well-crafted bio can present you in an engaging, professional way and be well worth the investment.

Tell a story, but keep it practical

You want a bio to be vivid and engaging, says Baker, but there’s no single way to achieve that goal. “Some bio writers really bring across either the sound of a band or the content of a lyric,” he says. “Lyrics are important, and stories behind lyrics are important, too. One writer I work with is a former English professor. He really knows how to explain a lyric, get inside it, and find something in it to talk about. That’s a very different skill from a jazz bio writer, who will be able to better describe the confluence of influences, improvisational flow, and sonic appeal of an album.”

Regardless of how you make a bio come to life, remember that the core of a bio is the information it presents. In other words, you want to do your reader’s homework for him or her, says Baker – regardless of whether that reader is a journalist or fan-in-the-making. “It should be the one place where a journalist in particular can look for reference on an artist,” he says. “Everything you need to know should be right there, and be easy to find.”

For other perspectives and tips, check out these bio-writing articles:
Write a Band Bio
Writing a Band Bio for Your Website – Create an Artist Bio That Rocks!
Creating an Effective Bio

Disc Makers’ regular contributor Michael Gallant’s debut trio album Completely received a four-star review from DownBeat magazine and a five-star review from Critical Jazz, which stated: “This, my friends, is the future of jazz. Fresh, invigorating, progressive – there are simply not enough positive adjectives to list here.” Learn more, download now through iTunes, jam along with the new JamBandit app, or purchase through CD Baby. Follow him on Twitter at @Michael_Gallant.

Read More
Five elements of your artist brand
Are You Ready to Work With a Music Publicist?
Make The Most of Good Press – How To Leverage Your PR Success
You’ve Written A Press Release – Now What?
Press Kit Posts – Press Releases, Band Bios, Publicity, and More

19 thoughts on “How to write a killer artist bio”