Last month, we published “Facebook Marketing Tips for Your Music Promotion,” a post that explored how to effectively optimize your Facebook band page and navigate the world’s most popular social media platform in your social media marketing. This month we dive into the social media platform that has enamored so many musicians, yet has confused so many more: Twitter. Twitter for music promotion can be highly effective, but you need to understand the nuances of the platform first.

Introduced as a micro-blogging platform in 2008, Twitter has become not only one of the largest social networks in the world, it has become the standard for real-time communication between bands and their fans.

One of the most common complaints I hear from independent musicians approaching Twitter for music promotion – or even just using the platform – is that they see it as pointless.

“No one cares if I post a photo of a tuna sandwich.”

[Writer’s note: I’m not quite sure why the tuna sandwich has become the standard for all things pointless and irrelevant on Twitter, but I digress…]

Sure, tweeting about meaningless aspects of your everyday life WOULD be boring to both you and your fans. But that is no different on Twitter than it would be anywhere else, be it Facebook, your blog, your newsletter, or in a conversation. If you are going to use Twitter – and if you are going to use Twitter for music promotion – you need to have a strategy and interesting content, same as anywhere else.

Twitter allows you to share bits of information, 140 characters at a time, but it’s up to you to create a content strategy that incorporates topics that you and your followers can be passionate about.

Understanding how to remain consistent, both in content topics and frequency of your tweets, is key to your ability to successfully navigate and utilize Twitter for music promotion.

There is a barrier of entry to Twitter, which is the fact that the platform uses it’s own language for allowing people to interact with one another. Fortunately, it’s quite easy to learn, and it has become the standard language used on several other platforms (even Facebook now incorporates some of these terms).

This allows you to either speak directly at someone or to mention someone within a tweet.

Speaking directly at someone:

By including “RT,” followed by the original tweeter’s handle, you are effectively giving them credit for the tweet. This is a great way to share new content for your followers while engaging with those who have already created content that you find interesting.

Twitter has incorporated a “Retweet” button that allows you to retweet without the fuss of adding “RT” at the beginning of your tweets.

Including one of these within a tweet will allow you to tag the overall top of your tweet so that it can be found by others within relevant search results.

Direct Messaging is Twitter’s private messaging (think macro email) service that is included within every account. 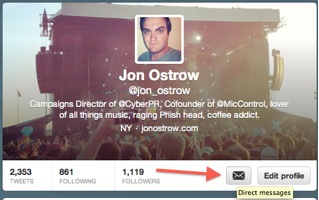 As with any social media platform, there are going to be certain types of content that are more effective than others. Unlike Facebook, which thrives on photos, Twitter is a text-based platform, meaning simple text-only tweets are still likely to be engaged with if the statement is interesting enough (or has an effective use of hashtags).

However, there is no doubt that spicing up your tweets by including photos, videos, links to articles, and hashtags will make your tweets even more likely to be engaged with.

A recent study conducted by SocialMediaToday.com shows just how effective these other forms of content can be. Here’s a section of the infographic they produced: 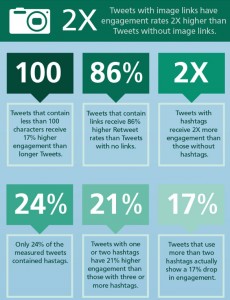 Now that you’ve got a basic understanding of how to craft a tweet using Twitter’s simple, unique language, and what types of content may be more effective than others, it is now time to start exploring Twitter and getting yourself connected with other people, be they other musicians, fans, or bloggers and podcasters that you’d like to network with.

There are several ways to find relevant people on Twitter:

1. The “Discover” Section within Twitter is an entire section dedicated to helping you to find relevant conversations, topics, and people to follow. This can be accessed from both the browser version and the mobile version of Twitter.

2. Twitter Search is an advanced search function that will allow you to search keywords, hashtags, locations, etc.

3. Discover Directories and Services. Although many services offer user directories and follow suggestions within, there are several services dedicated to helping you to identify people to follow, including WeFollow.com and SocialBro.com.

4. Lists. A tool that allows users to collect groups of tweeters into one place, lists can be a great way of find several new, highly-relevant people to follow.

Wading Through The Never-Ending Stream of Tweets

The problem is that Twitter does not have an equivalent to Facebook’s Edgerank algorithm, which means you will see the tweets from every single person you follow.

There are two simple solutions to this problem, which will help you to organize your tweet stream into a far more manageable groups of topical tweets.

1. Lists. As mentioned above, Twitter gives you the option to collect the people you follow into lists. Using this feature will allow you to create several different lists surrounding different topics, locations, etc.

2. Social Media Management Dashboards. There are several third-party services that offer you the ability to interact with your Twitter account in a dashboard view, effectively breaking up the single tweet stream that appears on your Twitter profile into several streams based on lists, keywords, and/or hashtag searches. Two standout services are Hootsuite and Sprout Social.

Both services allow you to view your tweet stream broken up into several, more relevant views, offer analytics to ensure your tweets are as effective as possible, and allow for scheduled posting.

Speaking of scheduled posting, Twitter is one platform where it is widely accepted as common practice. The reason for this is because, again as mentioned above, Twitter lacks any form of algorithm determining which tweets you should or should not see. And at the same time, Twitter also thrives on the concept of communicating in real-time.

So unlike Facebook which dictates that less is often more when it comes to your posting, Twitter is more of a free-for-all. That is to say, you can tweet as many times as you’d like without the platform itself penalizing you for it. However, there are two very important reasons for still considering the “when” and “how often” of your tweeting:

1. As with any effective content strategy, posting on a consistent basis is critical to success. If you truly treat it as a free-for-all, you may end up tweeting 30 times in one day and then not remember to tweet again for several days. This sort of inconsistency can be an engagement killer.

2. Even if you can tweet whenever you want, there is no question that there will be times during the day and week when it is best to tweet. This will depend on who your fans and followers are, how old they are, where they live, or what else might be grabbing their attention at any given time.

While Hootsuite and Sprout Social can allow you to schedule tweets in advance, you will need to understand what times are most relevant for your following – something SocialBro can help you with.

There is one service that combines the scheduling feature with the time-targeting of SocialBro, called BufferApp, which will automatically analyze your previous tweets and determine the three or so best times during the day for your tweets to be sent out and will automatically schedule your tweets for these times.

Jon Ostrow is a regular contributor to Disc Makers Echoes blog and is the Campaigns Director for Cyber PR. Follow him on Twitter @jon_ostrow.