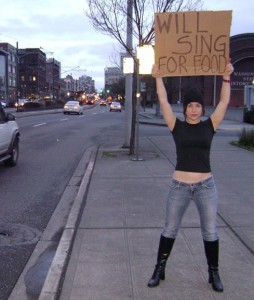 The starving artist routine can help derail your music career, so focus on the positive

As indie musicians devoting ourselves to the demands of a music career, we know that many (most?) musicians are always broke. Like Ramen broke. PB&J broke. Rice and beans BROKE.

You know who doesn’t know that musicians are broke? Non-musicians. And let’s keep it that way.

Music lovers (your fans) don’t want to hear how you are a "struggling/starving musician." It’s not romantic. The starving artist thing is romantic to reflect back on (once you’re successful) and you can talk all about it in interviews with Rolling Stone in five years. But don’t talk about it now.

Building a grassroots fan base is about showcasing that you’re on the up and up. No one wants to be a fan of a failing, starving, broke-ass band. They want to support bands who have their act together, have a budding music career, and are about to take over the world. They can then say "I knew them when…"

There is a difference between talking about how broke you are and being humble and (for the most part) transparent. I see bands post all the time on Twitter and Facebook about how broke they are and can’t afford to eat so "buy my music." Big no no. Guilting them into buying your music never works. You’ll be sure to get an "unfollow" rather than a sale.

You can, however, post about how you’re looking for a crashing pad. Just because you need a place to stay doesn’t mean you’re broke. It could mean that you’d rather spend that $100 on gas, inventory, blow, whatever. Or that you just want the comfort of a friend/fan’s hospitality. Amanda Palmer STILL crashes with fans all over the world and she raised over a million bucks on Kickstarter!

Your fans are living vicariously through you. All of your successes are their successes. If you keep talking about all your music career failures, they’re not going to be so excited to be your fans as they already have enough failures going on in their own lives and don’t need any of yours.

Also, I made the mistake when I first moved to LA by telling everyone I met how tough it was to make ends meat in LA (vs. Minneapolis). I thought people would empathize and we would share in our collective misery. The thing I soon realized was that most people thrive on positivity and enthusiasm out here (not misery — go figure). I lost a few early connections because I revealed too much struggle and not enough inspiring drive.

Sure, misery loves company. But you know what also loves company? Awesome. Be awesome and you’ll attract awesome people.

STAY POSITIVE and keep the uplifting, exciting success stories (as seemingly small as they are to you) coming. That keeps people inspired. Talking about how you lost a gig, can’t pay for gas or food, and are thinking of quitting music because it’s too expensive is just a bummer. Don’t bum people out with your negative tweets, posts, or in person conversations. Leave that for your music.

Since quitting his day job at Starbucks in January 2008, Ari Herstand has played over 500 clubs, colleges and festivals in 40 states, opened for Ben Folds, Cake, Eric Hutchinson, Matt Nathanson, Joshua Radin, and Ron Pope, and had his music featured on popular TV shows like One Tree Hill and various Showtime and MTV shows. Ari relocated from Minneapolis to Los Angeles in the fall of 2010 to begin the next phase of his artistic journey. This year he landed two co-starring roles on 2 Broke Girls and TOUCH, as well as a lead role in feature film. Check out his independent music business advice blog, Ari’s Take.

Read More
Music Career Killers
My Job Is Better Than Yours — aka The Starving Artist’s Silver Lining
Are You a Beggar or a Rockstar?
10 Great Tips to Help You Fail as an Independent Artist