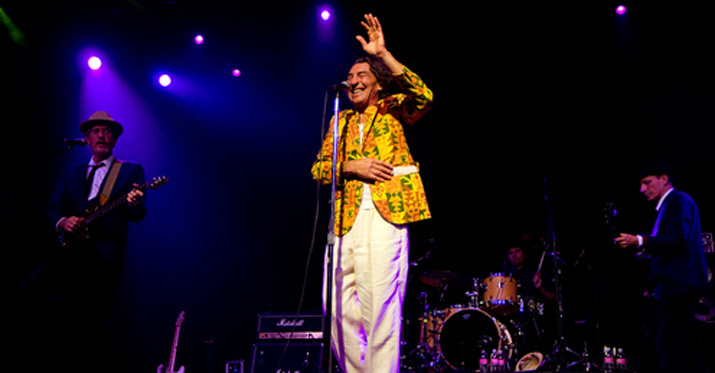 Working on the music, the visual, and most of the transitions for a show usually takes up most of a rehearsal time. So when I first started working with artists on their live show, and we’d get to places where the front man needed to introduce the band, tell a story, do a song intro or verbal transition, I’d go along with them when they said, "I’ll talk here," or "I’ll put some stage banter here." I didn’t want to waste potentially good rehearsal time on something all of us do every day: talk.

Then I saw those artists onstage.

I found out pretty quickly talking doesn’t come naturally to everybody when they’re standing onstage. In fact, people often revert to clichés we’ve heard a millions times from other bad front people: "This song is about," "Here’s a little tune I wrote," "Are you having a good time?" "We’re gonna slow it down a little bit" — or my favorite cover band banter, "We’re gonna do a little Led Zeppelin." I want them to do a big Led Zeppelin — why is it always "little?"

On the other extreme, some artists say "My music speaks for itself." They barely say two words to the audience in a 60 minute show, and you don’t know any more about them when they leave the stage than when they first got on the stage.

Don’t misunderstand — there’s nothing wrong with lively stage banter, telling a story to set up a song, or playing songs back to back without saying a word. But when speaking from the stage, there are actually some concepts you can learn to keep an audience engaged.

First, you need to know you aren’t trying to accomplish the same thing every time you speak during a show. Let me give you a few examples of why you often need to talk:

1) Introductions. There are two places I recommend introducing the band. A short, quick intro after the first or second song to let them know who you are; and later, near the end of the show, after you’ve won the right to ask for applause, a more in-depth introduction of everyone.

3) Setting up a Song. I work with many artists to set up a song or two in their show with storytelling — what prompted the writing, what it means to them, and so on. A compelling story will help an audience connect emotionally to certain songs.

4) Audience Participation. Audiences like to be a part of your show. There is actually a very effective technique to this. I wish I could go into depth, but it is more complicated than one blog allows! So let me give you a tip on how not to do it. Don’t mumble something into the mic, then hold the mic out to the audience, and expect everyone in the room to join in. Your instructions need to be understood!

5) Pitching Merch. Again, this needs to be after you’ve won the right to ask your audience to buy something. Hopefully, because your show is so awesome, you’ve given them a reason why they should buy — now, you tell them how and where to get it. Be clear. Not salesy — but clear.

These are just a few of the most common places artists need to speak to their audience — certainly by no means all of them. But ask yourself as you prepare — is this a quick transition, am I setting up a song with a story, am I introducing the band here, trying to inspire people — what am I trying to do verbally?
It’s like a meal. Even if you’re a gifted cook, you still probably wouldn’t cook a 5-course meal every night. One night you cook a 5-course meal for friends and family because you have the time and are trying to accomplish an atmosphere conducive to relaxing, talking, entertaining (storytelling).

The next night you only have an hour between work and going out to see a play. You don’t cook a 5-course meal. You just get a fast food meal pickup (transition).

Maybe you are meeting people for the first time. You might meet them for coffee or a quick lunch just to introduce yourself (introduction).

You’re hosting a beach party, so you start a big bonfire and barbecue hot dogs and hamburgers, fill ice chests with cold drinks, and the focus is on the fun not the food (audience participation).

That’s the way it needs to be with talking to your audience. Know why you’re talking, when it’s appropriate to do it, and what you’re trying to accomplish. If you have the gift of gab it would be wrong to serve your audience a 5-course meal every song. But even if speaking makes you nervous, you can’t let everyone go hungry!

Either way, recognize what you are trying to accomplish, work it out, woodshed it, and bring it to rehearsal. Verbal communication between human beings is an important part of life… and your show. So whether you’re naturally comfortable speaking to a crowd or not, it’s important to develop those verbal skills onstage, which can go a long way towards keeping your audience captivated and engaged.

Photo of Fee Waybill of The Tubes by Mat Hayward via ShutterStock.com.

Tom Jackson is a world renowned live music producer, author of the book Tom Jackson’s Live Music Method and the All Roads Lead to the Stage DVD series, and master at transforming an artist’s live show into a magical experience for the audience. Tom has worked with hundreds of artists in every genre, including major artists like Taylor Swift, The Band Perry, Jars of Clay, and more. He also shares his expertise as a speaker at colleges, conferences, and events worldwide. To start learning the process of a great live show, check out OnstageSuccess.com.

15 thoughts on “Stage Banter and Your Live Show”